20th Century Fox is one of the “Big Six” major American film studios, together with Paramount, Warner, Universal, Columbia and Disney. Founded in 1935, as of 2017, it held a market share of almost 13% in Gross revenue, only behind Disney, Warner and Universal (1).

The competitive landscape of the film industry is rapidly changing with the growth of other distribution channels. Platforms like Netflix not only are a window for thousands of hours of entertainment, but they have also started to develop original content with increasing budgets (2). This, on top of an increase in piracy levels is diminishing the margin of error for traditional movie studios (3).

Machine learning can help predict which projects will do better in the box office, which has implications in distribution and advertising budget allocated, and could eventually help decide which projects to fund or discard. Investing in movies has to huge risks, especially for projects that are new and for stories that the public has not seen or heard of yet.

Understanding how consumers will react to a story has proven to be a difficult task throughout the years, in the past based on intuition of experienced industry executives. It is critical to understand the market and how it is segmented. 20th Century Fox has made progress in this by partnering with Google’s Advanced Solutions Lab. They created Merlin Video. Estimating how users will react to a story based on a script is hard because many of the emotional and appealing characteristics of the movie will not be reflected. Therefore, Merlin uses the movie’s trailer to predict how potential moviegoers will react. Since the trailer is one of the main advertising tools used by studios to generate awareness and curiosity it can be considered a good proxy to estimate box office performance.

How does Merlin Work? 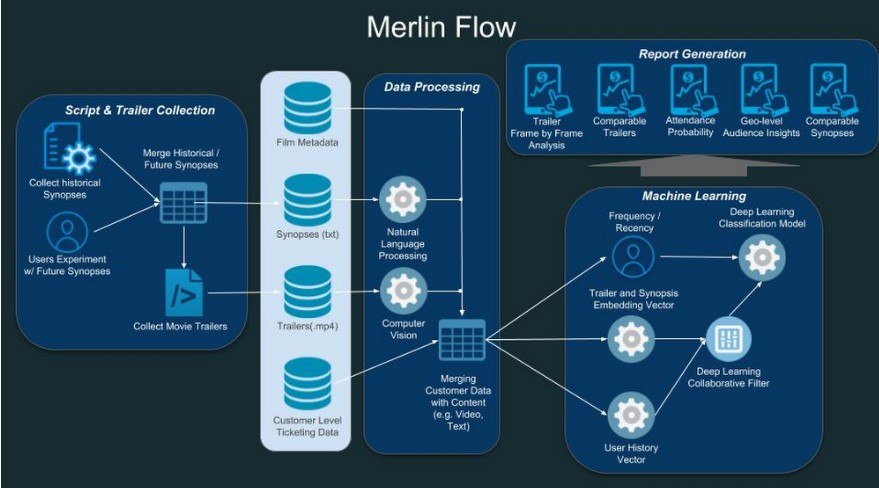 Merlin is powered by Cloud Machine Learning technology. Since this is a managed service, all resource provision and maintenance are automated, so the day to day operations can be handled exclusively by data scientists, without requiring intervention from other business units (4).

The team began by analyzing a large publicly available dataset of YouTube videos. The idea is for Merlin to learn a collection of filters that capture a particular kind of object sequence that can then be suggestive of specific actions. For example, a filter could learn that intermittent sequences of a car and a person could mean that the scene consists of someone driving aggressively on the street being chased.

Since there are a huge number of varieties of object sequences that can appear on a movie trailer, the approach is to identify those that may be most predictive of box office performance based on customer transaction data (5).

After analyzing a movie trailer, Merlin would return the labels most associated. These could be things like tree, man, facial hair, vehicle, forest, etc. After identifying these labels results would be compared to labels previously generated for other movie trailers, as well as with its attendance records (6).

To account for the temporal positions of these labels in the trailer (they might appear in different moments) the team developed a custom neural network. This can give information about the movie type, plot, roles of the main characters, etc. When combined with historical customer data, the output can be creating predictions for customer behavior (5).

This result can lead to significant impacts in the marketing strategy for the studio. They can better allocate advertising budget given the predicted viewership intent. And, since the data is more granular, they can divide the actual box office performance in segments, to see which of their predictions came true and which did not.

The process described above can make predictions on viewership interest and box office performance based on movie trailers. However, this entails having already filmed the movie in its entirety. In 2007, the average movie budget for a big studio was 65 million dollars (7).

Efforts should be made to try to use this technology earlier in the production process. This could be trying to estimate intent based on the script itself, in spite of the difficulties that this entails, mentioned previously. If this were possible, it could help make decisions on how much budget to allocate to production or which movies to finance. Technology could also be applied during the shooting of the movie, using early rough cuts as a proxy that could lead to changes in script and directing during the making of the film.

Could we find a way to estimate a potential output for a film based only on the script, without first having the creative process of a director and actors?

Can machines and algorithms correctly predict something so subjective and creative as art?

The Unilever Foundry – bringing innovation to 400 brands, under one roof