It is no secret that fast fashion has completely transformed the way we purchase and consume articles of clothing. Low prices, coupled with the almost constant release of new styles and designs, have created a generation of consumers that not only dispose of clothing within 35 days, but also harm the environment, given the 400% increase in carbon emissions required to support such constant demand. [1] 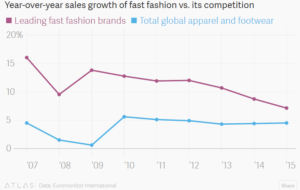 What’s more is that these trends are unlikely to change given that fast fashion has consistently outpaced the growth of other global apparel brands for the past 8 years. [2] In fact, a look into H&M’s Nine Month Report for 2016 highlights that the world’s second largest fast fashion retailer plans a net increase of 425 new stores over the course of 2015-2016. [3] This represents a roughly 10% increase over their existing spread of ~4,000 stores in 62 markets today. With more demand for product, comes ever growing pressure on the environment to provide a constant and sustainable supply of low cost inputs in the form of productive land, water, and energy. In addition, given the increasing unpredictability of weather due climate change, retailers must also start worrying about their toplines. If sales are impacted by the seasonalilty of clothing and seasons no longer follow traditional cycles, retailers must rethink their production and merchandising schedules.

All of that said, to H&M’s credit, the company has consistently taken action against climate change for the past several years. Looking end to end at the retail value chain, H&M has been able to identify and implement several climate friendly business practices. Some examples include: 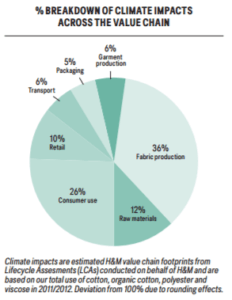 Where do we go from here?

Although it is clear that H&M has made important strides in mitigating climate change, skepticism remains as to whether or not these initiatives are enough to counter-balance the increases in production demands. In addition, as mentioned above, technology has not yet advanced enough to effectively recycle clothing, meaning it would take 12 years to recycle 1,000 tons of garment waste. To put this number into context, 1,000 tons of new clothing are produced every 48 hours, showing just how limited the gains are from this initiative. [6]

Taking a step back though, given H&M’s unwavering commitment to environmental sustainability, we would be remiss not to celebrate the progress they have made to date. Looking ahead, a continued focus on consumer education in sustainability along with further investment in garment recycling technology will likely yield the most dividends given the company’s success with other sustainability initiatives. Though this article has not considered the labor side of the equation, making sure that fair labor practices are in place will also be key to their future success.

[6] Lucy Siegle, “Am I a Fool to Expect More than Corporate Greenwashing?,” The Guardian, April 2, 2016, https://www.theguardian.com/commentisfree/2016/apr/03/rana-plaza-campaign-handm-recycling, accessed November 2016.

World Running Out of Water? Drink Coca-Cola Instead!