36 percent of ‘major’ hotels around Bahamas are at risk from the sea rise. Bahamian tourism industry can expect an annual loss of between $869 million to $946 million due to sea level rise. By 2050 Fiji and Kiribati Islands might disappear from the maps. But not only raising see levels, surge in tropical storms or decrease in snowfall are concern of the leisure industry leaders, but also the environmentally conscious customers. How has Hilton Worldwide addressed all those issues?

Hilton Worldwide is one of the global leaders in the green space in the World. It was selected Forbes Top 50 Green Brand and Newsweek’s Top Green Firm in the World. The company is focusing on various environmental aspects of its operations: energy and water use, waste management and carbon emissions. A dedicated to environmental problems’ website serves as a major CSR promotion tool: 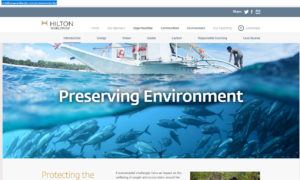 In carbon emissions Hilton focused mostly on energy use reduction and also leveraged renewable energy credits to decrease it CO2 footprint. The company is providing its customers with a tool that guides hotel customers on how to minimize their footprint during the stay. It also allows the customers to calculate the emissions caused by meetings and events. Customers are then offered an opportunity to acquire carbon credits to offset the negative impact. The credits could be spend, according to customer choice, on rainforest saving in emerging markets, such as Indonesia or wind-generating projects in China or India.

Hilton Worldwide is also a member of the Hotel Carbon Measurement Initiative, together with 23 leading leisure industry companies. This initiative sets out standards for calculation of the carbon footprint of hotels and seeks to help them reduce it. Finally, Hilton is investing in renewable sources of energy and establishing partnerships with suppliers, to collectively look for footprint reduction. In the greenhouse gases emission space, Hilton reduced carbon output by 20.9% since 2009, which equals to removal of 128,725 cars from the roads globally.  Its general energy use dropped by 14.5% since 2009.

What are the competitors doing?

Similarly to Hilton, Intercontinental Group rolled out its online environmental tool, helping manage carbon, energy, water and waste across its 4700 hotels. Interestingly, upon initial reduction, Hayatt emission footprint has flattened recently. A recent study by Washington State University has proven that chain hotels do better job in the field of ecological solutions than their independent competitors. The chains more likely engage in activities such as: use of energy efficient light bulbs, training staff to turn off lights, heaters and air-conditioners, buying products in bulks to reduce packaging or using safer cleaners and chemicals.

I personally think it is not. Although Hilton’s efforts, similar to those of other top players in the leisure industry, look good on a corporate website, to me they are not the kind of involvement I would expect from a company directly, almost physically threatened by the global warming.

I imagine the company, which owns numerous coastal resorts, to be more deeply engaged in support for construction of coastal protective infrastructure, such as for example seawalls or beach-protectors, as well as helping local communities of threatened regions in relocation efforts.

Going forward, I think that climate change will significantly impact Hilton’s business. And I do not only mean the fact that any Hilton coastal project would have to take into account the projected changes in the coastal zone, due to climate changes. The Cornell University Center for Hospitality Research have just designed a Hotel Sustainability Tool, which will allow comparisons of carbon footprint between hotels. 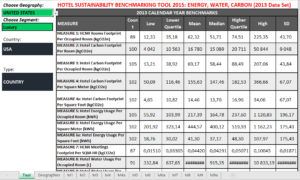 While the tool is yet simple, I hope that more developed version will increase competition among hotels, for the trophy of the greenest resort, as customers of the future will be even more environmentally concerned. And I do believe that Hilton could treat the emission reductions as an opportunity. For example, a recent study shown that green design of hotel buildings could cut 30-50% of energy costs per room, allowing savings as big as 6.75 USD per daily room rate. Maybe greenhouse gases emissions reduction pressure could also have “green” impact on hotel profits?

Negotiating your own demise

Student comments on Hilton Worldwide – cutting the green edge or imitating the competitors?