Yes, as counterintuitive as it seems, Cummins, one of the world’s largest heavy-duty vehicle diesel engine manufacturers, has developed engines that consume more to pollute less. In the past decade, Cummins has complicated its existence by adopting solutions to meet emissions standards such as this one that seem antithetic to this objective. To understand how Cummins got here, let’s first delve into understanding the main exhaust gases generated by diesel engines.

Exhaust emission regulations primarily focus on the reduction of Particulate Matter (PM – the black smoke which comes out of the exhaust pipe of trucks and cars) and Oxides of Nitrogen (NOx – toxic gas, main component of “smog”)1. But how do these gases generate? The process is very simple: combustion is the reaction of combustible (diesel) and oxygen. The products of this reaction are energy, heat and exhaust gases. Among the various exhaust gases produced by this reaction are PM’s and NOx’s. PM’s generate at the various stages of combustion while NOx’s generate under specific conditions of combustion. 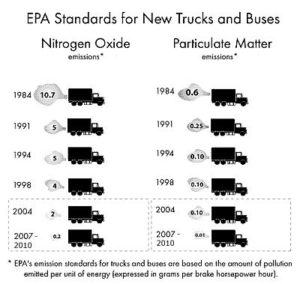 Cummins has addressed this conundrum by adopting Exhaust Gas Recirculation (EGR) technologies. The EGR system reduces the emission of NOx’s by basically reintroducing exhaust gases into the combustion chamber. These exhaust gases reduce oxygen intake available for combustion while also acting as heat sinks that reduce the temperature of the combustion3. This process allows for a considerable reduction of NOx’s. However, the application of EGR comes with penalties, one of which is an increase in fuel consumption4.

Even though EGR systems have progressively been perfected and their effect on consumption reduced, ever more stringent emissions standards have had a serious impact on the effectivity of this emission reduction system. Since EGR systems deal primarily with reduction of NOx’s, this system has had to be complemented with other components that deal primarily with PM’s and other gases. The limits on the emission of these gases in developed markets are determined by three main regulatory bodies: Environmental Protection Agency Standards (EPA), California Air Resources Board (CARB) and the European Commission (Euro). Since 2004, ever more demanding emission standards have required that heavy-duty vehicles reduce both NOx and PM emissions by nearly 90%5.

These standards have forced Cummins to constantly focus on refining EGR systems and develop novel components. These efforts have translated in not only less performing and more expensive engines, but also in more intricate designs that complicate maintenance processes. Where previous engine generations allowed personnel with basic maintenance skills and knowledge to solve a wide range of issues, newer engine generations require specialized – and expensive – maintenance.

For the past century, heavy-duty vehicles have been powered almost exclusively by diesel-powered engines. However, given the increasing difficulty to meet emission standards and no apparent major breakthroughs in internal-combustion engine technology7, the search for new type of engines has gained traction over the past decade. One such example are battery-powered engines. The use of these engines had been limited by battery capacity. Recent advances in battery technology have not only increased electric vehicle’s range8, but also allowed cars powered by electric engines to perform almost as well as those powered by internal combustion engines. Moreover, these engines are very convenient to use: their maintenance is simple and the battery can be charged at home – eliminating the inconvenience of having to drive to the gas station9.

These fundamental changes question the viability of Cummins’ business model: three fifths of Cummins’ engine categories are diesel engines. Engines and engine component sales account for 64% of Cummins’ 2015 sales10. Unless Cummins comes up with a radical proposal for internal combustion engines that allows it to comply with emissions standards and make maintenance easier for its customers, it will have to shift to new technologies. Cummins either evolves or it will go out of business.

Climate Change and the Future of General Mills

Student comments on Going out of business! Reduce emissions by increasing diesel consumption