Extreme conditions require extreme measures. That was probably General Motors’ (GM) rational when it joined Driving American Jobs, a coalition between auto industry groups to urge Donald Trump not to withdraw from the North American Free Trade Agreement (NAFTA).  Besides GM, the coalition unites players in every part of the supply chain: dealers, suppliers and the biggest automakers such as Toyota, Volkswagen, Hyundai and Ford. It is a combined effort to avoid big losses for the industry and it is the first time that these groups have all joined together to advocate on a single issue [1].

NAFTA allows for free trade on a number of goods between United States, Mexico and Canada [2]. On cars and trucks, duty-free imports and exports among the three nations are allowed as long as 62.5% of the cars can be traced to one of the three [3]. According to Driving American Jobs, it allowed US car industry to remain globally competitive.

President Donald Trump made it clear his intentions of either withdraw from NAFTA or to renegotiate major rules: he aims to increase the percentage produced in one of the three countries to 85% and to impose a threshold of 50% for how much is produced in US, in an attempt to create more jobs in the country [4].

However, nowadays vehicles are built on global platforms. They use global supply chains, and are sold in markets all over the world [5]. Global supply chain has become so diverse and complex that assigning country-of-origin status to every component has become difficult or impossible [6]. Auto parts come from every place in the world, and if players are no longer able to use a global supply chain to find the best value, they will no longer be able to compete against a vehicle that is made in Europe or Asia [7]. Off-shoring to “best cost” countries is an integral aspect of the global supply network, and contributes to higher productivity levels in the overall industry. This results in lower prices for consumers and return on capital for investors [8].

For example, for US automakers, Mexico plays an important role in the supply of cheaper auto parts. It represented approximately 40% of the top 35 imports in auto parts in 2017 [9] 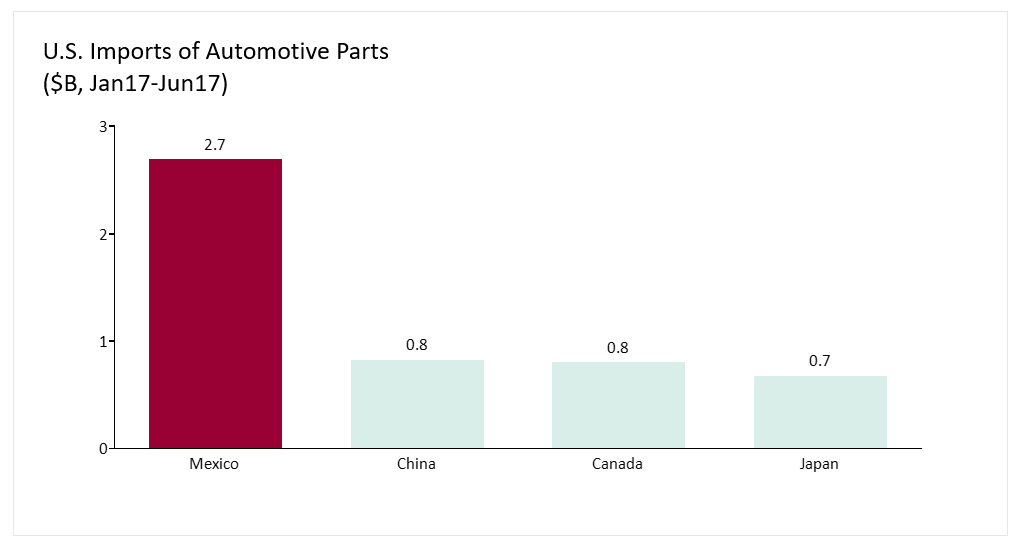 With that context in mind, it seems clear why GM has taken part in a movement to prevent harmful changes in NAFTA agreements. Joining Drive American Jobs was an important step in a battle that has been going for some time. The company has been resisting some attacks from the president.

In the beginning of this year, Trump publicly criticized GM in his twitter account for manufacturing its Chevy Cruze in Mexico and then sending it tax free to USA.  GM responded to Trump’s tweet, saying it makes most of its Chevy Cruze models in the United States and sells only a “small number” of one model made in Mexico in the U.S. [10]

Even after the criticism, GM stated publicly that it would not change its plans. Its small-car production would stay in Mexico, since manufacturing and plant investments are not easily changed [11]. GM’s CEO, Marry Barra, made it clear that GM would not alter its global manufacturing strategy to comply with political pressure [12]. The strategy remained the same some months later, when GM also stated that it would continue with its plans to shift production of GMC Terrain vehicles to its Mexican plants [13].

It appears that the company’s short and long term strategy has been standing against Trump’s protectionism movement and trying to avoid it at any costs. Since the stakes are so high, the company is putting its efforts to partner with others in the sector to get it voice heard.

The future is unclear. Should GM still hope and bet that NAFTA will continue going on? Or should it take other measures to absorb the impact of the possible end of NAFTA?

The company has been doing a great job in being true to its values and resisting the new era. However, given the uncertain scenario, GM should analyze its supply chain, think about the possible scenarios and what it would do in each one of them. It should be prepared for the worst case scenario.

If US really withdraws from NAFTA, GM’s costs in its American operations will probably increase due to higher import charges. It might be a cost that the company can’t afford and it will be tempted to move production to lower cost countries. Will that be possible? In order to address these questions and other concerns, the company should conduct studies to understand impact in its supply chain, risks involved and possible solutions.

(790, without Figures legend and sources)

[2] “How the US automotive industry may be impacted by the new administration”, PWC Automotive Series, April 2017, https://www.pwc.com/us/en/industrial-products/publications/assets/pwc-new-administration-impacts-auto-industry.pdf, accessed November 2017

Fall Without Pumpkin Spice Lattes? It Could Happen

UPS: The rising tide of sustainability

Student comments on GM strikes back