Glorified pedometers. Ugly jewelry. An overpriced tech fad. Nike’s latest failure[1]. There were a lot of monickers thrown around to describe the latest fitness tracking devices. Despite the many non-believers, these small bands that fit around your wrist were the beginning of a much bigger health and connected device revolution.

Founded in 2007, FitBit was one of the early adopters of this wave of devices. But leading the charge wasn’t easy. The early FitBit only tracked an individual’s steps and looked more like a bulky tie clip (see below). There was also a large margin for error, with something as light as turning a page (while still sitting down!) triggering the recording of a step.[2] By 2014, FitBit faced a class action lawsuit when some users experienced skin rashes after wearing the new bracelet version.[3] 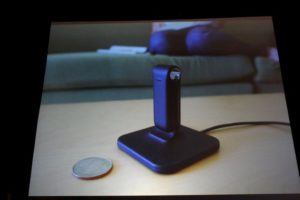 Despite some of these earlier setbacks, FitBit continued to innovate. It moved into social, allowing users to compete with each other via “challenges” or competitions. It also expanded its offerings, adding additional features such as specific activities (running, biking, skiing etc.), Bluetooth for data transfer and the recording of sleep and food. Today, the latest versions include automatic uploads to the app, insights based on user behavior and heart rate monitoring for even deeper health insights. In 2015, the company sold over 21 million devices across 29 million registered users and has the largest market share in wearables.[4]

However, one of the biggest changes came not from the features, but from FitBit’s business model. Despite Nike’s exit from the wearables space, competitors such as Misfit Wearables and Xiaomi started to saturate the consumer market with lower end models and Jawbone occupied the same range as FitBit. In this type of environment, in June 2015, FitBit IPOed.[5] With the new infusion of capital and sold out collections with fashion partners such as Tory Burch, FitBit started to gain a lead on Jawbone.[6] And then FitBit started to focus on the corporate segment instead, pushing devices to companies, while maintaining its foothold in the consumer segment.

The corporate wellness market is worth $7.8 billion with 15.9% of that dedicated exclusively to fitness services.[7] Recognizing the opportunity there, FitBit has since partnered with nearly 70 companies and continues to seek new opportunities to complement corporate wellness programs.[8]

From its current position, FitBit has two potential avenues for future growth. The company can either position itself as a center for a connected home or it can deepen its corporate relationships further and potentially start to penetrate the healthcare sector.

However, this position does not seem sustainable: Xiaomi and Apple are gaining on FitBit and it has lost over 8% market share in just one year, despite overall company growth. In light of that, it appears that moving forward with corporate partners and becoming deeply ingrained there via contracts and large spending programs, could be the best strategic move.

As of 2016, FitBit represented nearly 70% of all devices used in corporate wellness programs which includes names such as Barclays and Target.[10] Even here though, competitors – especially ones with pockets as deep as Apple’s – have and will continue to close the gap. These corporate partnerships are helping to secure FtiBit’s position in the market but one additional step to consider is taking those relationships further in the B2B space and partnering with actual health insurance agencies as well. Insurance companies could then begin to push the product to their clients (the Targets and Barclays of the world) and therefore increase the proliferation of FitBit devices. In turn, this will allow the companies to better monitor patient behavior and even begin to adjust premiums based on this tracked behavior.

Such a move could start a wave of controversy over the invasiveness of such a product and what it does for a patient’s privacy. But maybe such protests are irrelevant. Like many revolutions, maybe this one has already begun and cannot be stopped.

4 transformations in digital advertising that EVERY marketer should know. You Won’t Believe Number 3!