ESPN, a subsidiary of The Walt Disney Company (NYSE: DIS), is a media company that includes television channels (such as their flagship ESPN channel), ESPN.com, a radio network, and other assets.  The ESPN television network broadcasts live sports and other sports-related broadcasts in over 200 countries.  ESPN’s pervasiveness, importance, and influence in the sporting world are undeniable – in 2014, it was ranked as the world’s most valuable media asset and second most valuable sports brand behind Nike1.  The company’s first foray into digitization came in 2006 with Mobile ESPN, which provided sports content on demand for mobile phone users who downloaded the app.  Below is a sample of the current ESPN app. 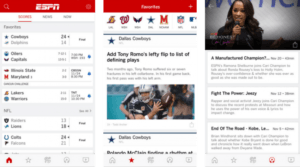 While ESPN gets the vast majority of their revenues from affiliate fees related to TV (approximately $6 billion3), there have been disturbing trends with the viewership.  As shown in the chart below, the number of households with ESPN peaked in 2011 and has dropped precipitously in the past couple of years. 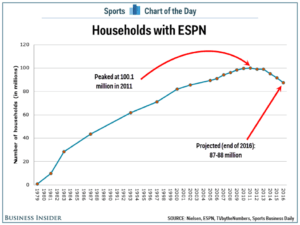 As revenues from the big cable bundles have dwindled, ESPN knew they had to re-position themselves to compete in this digital, cord-cutting age.

ESPN adopted a strategy of “building digital verticals around stars and subjects”4; however, to date, there has been much uncertainty about their ability to implement the plan profitably and effectively.  Grantland was a pop culture and sports blog started in 2011 by well-known (and occasionally controversial) sports writer Bill Simmons.  While it reached decent levels of popularity, it was rumored to have never reached profitability and was shut down in 2015 after Simmons’ departure.  Below is a sample of the Grantland website. 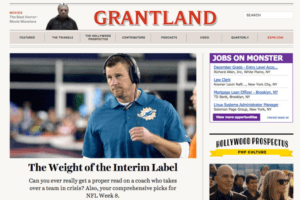 ESPN’s The Undefeated, a website exploring the intersections of culture, race, and sports, got off to a rough start with a long delay and the resignation of the founder4‑.  The digital vertical at ESPN was also the source of many layoffs in 20155, perhaps signaling the firm’s lack of commitment to the strategy.

ESPN’s app is one of the most popular: “in an average week, across all of its apps, ESPN delivers approximately 600 million alerts to tens of millions of phones”3. Moreover, the company has added a daily feature on Snapchat to appeal to a younger generation.  Between all of its digital offerings, ESPN’s mobile audience is much bigger than its current TV audience; yet, the difficulty of monetization in mobile has plagued the company as it looks for ways to replace its fading revenue from cable subscriptions.

In 2016, ESPN/Disney has forayed into new partnerships to strengthen their digital position.  First, the company purchased one-third of Major League Baseball’s digital business (with an option to take a majority stake in the future).  This business, called MLB Advanced Media, manages digital ticketing, live streams, and sponsorships. MLB Advanced Media “distributes 25,000 live events annually and 10 million streams daily” and, perhaps more importantly, “has the resources to support “millions of multi-platform subscribers and processes”6.  Below is a sample of MLB Advanced Media’s live streaming. 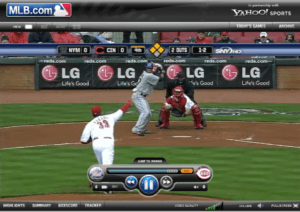 ESPN also reached an agreement with Tencent to leverage potential synergies between ESPN’s sports content and Tencent’s user base.  According to terms of the deal, “ESPN’s content will be localized and exclusively distributed and promoted by Tencent’s digital platforms in China”7.  Tencent’s live sports and digital offerings in the Chinese market will now be exclusively Mandarin ESPN content.  Through this arrangement, ESPN can quickly begin reaching millions of Chinese fans with their extensive coverage of basketball, soccer, and other sports.

Student comments on ESPN: The World Worldwide Leader in (the Digitization of) Sports (Media)?