President Trump was elected into office on a platform of fierce “America First” nationalism, and has repeatedly called NAFTA the worst trade deal ever signed. He argues that the deal disproportionately hurts the U.S., citing the ~$63B trade deficit with Mexico as evidence[1]. As a result, NAFTA renegotiations are currently underway. One of the industries most nervous is automobile manufacturing. The auto industry is responsible for ~$74B of the aforementioned trade deficit, and Trump has signaled out major players like General Motors (GM) for killing American jobs by moving production to Mexico[2], so it is clear that any NAFTA changes will involve the industry.

GM and its peers have ample reason to be concerned, as they are deeply reliant on globalization. Auto manufacturers rely on off-shoring production to “best cost” countries, which ultimately translates into lower costs for consumers[3]. Under NAFTA, GM is able to source a variety of intermediate parts tariff-free from both Canada and Mexico. In 2016, Mexico and Canada accounted for 49% of U.S. vehicle and auto parts imports[4]. The supply chain is divided up so minutely that parts and sub-assemblies may cross NAFTA borders more than six times before converting to finished goods[5]. And production spreads much farther than just North America; GM’s supply chain spans 17 plants in 31 countries. Beyond significant cost savings, globalization has allowed GM to reduce supply chain risk via diversification.

A few of Trump’s proposed NAFTA changes are especially alarming. NAFTA’s “rules of origin” specify that 62.5% of regional value content (RVC) for vehicles and parts must be produced in North America[6]. Trump wants to increase the RVC to 85% and institute a U.S. specific content requirement at 50%[7]. Further, he seeks to both expand the scope of the requirements and tighten the rules for what can qualify. Trump has even threatened to institute a 35% tariff on imports from Mexico. These changes could be financially devastating for GM, as much of their labor-intensive production has moved to Mexico, and they benefit from content exemptions and loose qualification rules[8]. And supply chains have become so complex that implementing new tracing mechanisms would be onerous.

In the short term, GM’s management’s focus has been to influence NAFTA negotiations. The American Automotive Policy Council (AAPC), which represents GM, Ford, and FCA, has been vocal in expressing the severe negative effects the proposed changes could have on the American economy. AAPC and other major alliances representing the auto industry have also formed “Driving American Jobs”, a coalition leading the charge to influence lawmakers to prevent Trump’s changes[9]. Beyond lobbying, GM has largely continued business as usual, a smart move given the uncertainty around the negotiations’ outcome. For example, they have moved forward with an $800M investment to retool one of their Mexican facilities, but have not publicized it via press releases or released much information, presumably to avoid Trump’s wrath[10]. GM is also already digitizing their supply chain, which may help them in the event of new tracing requirements.

Beyond their actions to date, GM could take a few additional steps. They should clearly highlight their American investments; publicizing their recent $1B expansion of a Texan factory and establishment of a supplier facility can be powerful in swaying public opinion. Management can also prepare for the potential financial implications of NAFTA by continuing to invest in technological improvements that would increase efficiency and automation, thereby reducing costs. If any of Trump’s more radical proposals come to fruition, GM’s management will need to make difficult decisions on how to reshape their supply chain. Based on their financial calculations, GM could react by shifting production back to the U.S. as Trump hopes, or just the opposite. Increased U.S. production may only be economically feasible with high-tech production via robots (not American workers)[11], requiring significant technological investments. If management determines it is too costly to comply with increased content requirements, it may shift even more production to low-cost Asian countries, choosing to pay the 2.5% on imports[12]. This would entail additional investments abroad to increase capacity, and may involve shutting down North American facilities. Either way, it’s likely the increased costs GM would face under NAFTA changes will reduce, rather than create, American jobs.

Figure 2. GM has dozens of plants worldwide that could accommodate production. 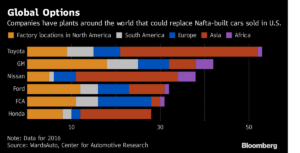 For GM, a key question remains: given both the cyclical nature of automotive demand and the fact that only 3-7 years remain of a Trump presidency, how should GM walk the fine line of preparing itself for big changes while not incurring huge financial costs that may soon be unnecessary?

[3] “NAFTA Briefing: Trade benefits to the automotive industry and potential consequences of withdrawal from the agreement,” Center for Automotive Research, accessed November 16, 2017, http://www.cargroup.org/wp-content/uploads/2017/01/nafta_briefing_january_2017_public_version-final.pdf.