A Product in High Demand 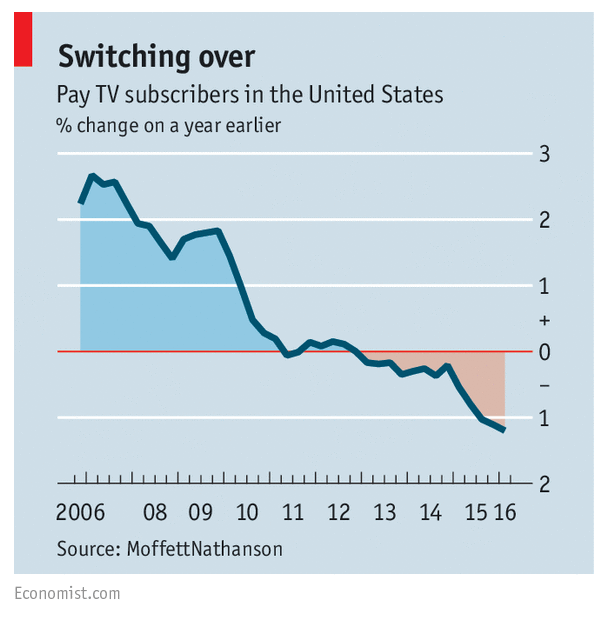 This fall, the possibilities for entertainment on television are more promising than ever:  NFL Football, a new season of The Walking Dead, Westworld and the presidential debates to name a few examples.  Suffice to say – there is an abundance of “must see TV”.  But the leading provider of subscription television, DirecTV is not celebrating – instead they are dramatically disrupting their own business and operating models.  This month the company introduced DirecTV Now, a streaming only version of their satellite service to posture their business and operating models for long term success.  A new generation of consumers empowered by technology is placing immense pressure on DirecTV and the industry.  The differing methods of adaptation and value delivery will determine the ultimate success or failure of DirecTV and the industry as a whole. 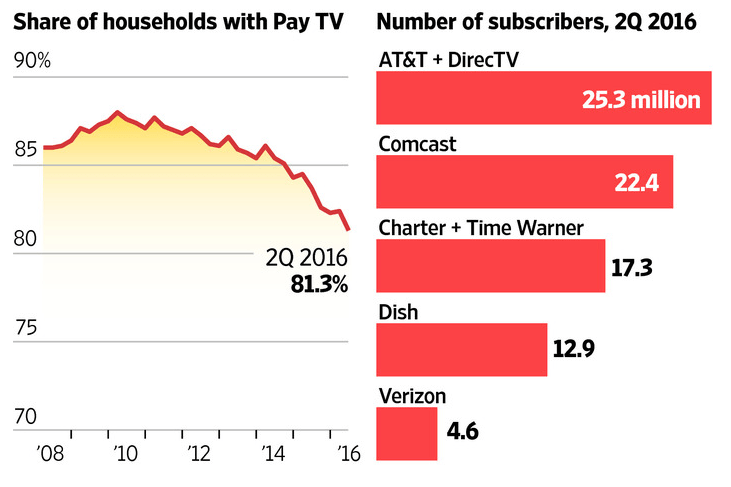 The traditional DirecTV business model had several streams of revenue: paid subscriptions, equipment rental, and advertisements.[1]  This profitable model provided gross margins of 30-60%.[2]  Ubiquitous bandwidth growth, mobile use, on demand streaming competitors, and price sensitive consumers have significantly driven down willingness to pay for cable’s traditional subscription model creating a new growing market of consumers.  Three segments are impacting the status quo: Cord Nevers, Cord Shavers and Cord Cutters.[3]  This current market is estimated at 20 million US households and growing at a rate that could soon eclipse the current paid subscriber market share of DirecTV.[4]

In 2015 DirecTV was acquired by AT&T for $49 billion.[5]  This was the first stage in an aggressive effort to posture against the shifting market by bringing the synergies of internet and mobile with television programming.  In a third step, AT&T is in the process of acquiring Time Warner for $85.4 billion.  With Time Warner owning several networks, this acquisition completes a trifecta of content, programming and data delivery.  AT&T hopes this merger will all them to acquire a “zero rating” model.  The zero-rating model allows mobile phone users to stream specific content without data usage penalties bundling all value adds of the company in a stronger way than competitors.  However, this effort is currently under intense scrutiny with regulators and advocates of net neutrality[6].  Some argue that the companies should not be able to differentiate or seek preferential treatment of their internet content over their competitors.

New Operating Models:  Skinny Bundles and Over the Top

DirecTV Now is attempting to target the cord cutters and cord nevers – even at the risk of cannibalizing traditional service.  Differentiating from typical on-demand competitors like Netflix or Hulu – the network will provide consumers with over 100 channels of live streaming television at a price point of $35 a month.[7]  The industry refers to this as an “over the top” model – skipping over the top of the cable box and taking content from the providers to the consumer.  The company’s major competitor Comcast has taken a vastly different approach, attempting to lure cord shavers with Skinny Bundles.  Skinny Bundles provide traditional subscription television with a much more customizable set of channels to suit personal preferences at a lower price point.

Long Term vs. Short Term:  Skinny Bundles or Over the Top

Comcast’s skinny bundles strategy, strengthened by the Summer Olympics coverage, has been successful with 28% increase in revenue while posting an increase of 48,000 video subscribers during a recent quarter. [8]  Time Warner publically regards “over the top” with skepticism and believes that it will not lure significant consumers from the cord nevers and cord cutters – at least in the next 2 years.  The performance of DirecTV Now is unknown as it rolls out to consumers this month but similar over the top services such as Dish’s SlingTV have found some success in the market.

As a cord cutter, I am skeptical about either option.  It would take a lot to bring me back.  I think that DirecTV is taking a crucial first step, but needs to remain open to a bolder combination of both options.  They should posture themselves as a first mover in a true over the top model with channel by channel orders – not bundling.  I’m concerned that the entire concept of cable television channels is at stake as on demand content becomes more ubiquitous and the golden standard.  I think sports and news channels will survive – but if the industry wants to maintain the other current content we see – it needs to continue to be flexible to shifting consumer demand and open to additional disruption.

Student comments on DirecTV Now: Cord Cutting and the Future of Television