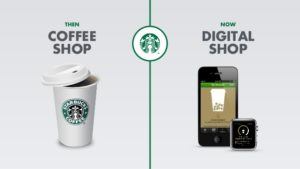 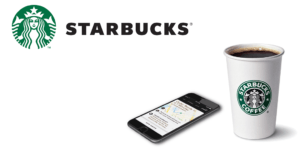 “Perhaps no single competency and capability is enabling us to elevate and amplify the Starbucks brand and to deliver an enhanced Starbucks’ experience for our customers more than our global leadership position and continued investment in mobile, digital and loyalty innovations and technologies”

How many apps on your phone are for a food or beverage retailer?  Do you even have more than one or two?

It’s quite likely that Starbucks is one of those apps on your phone. In the App Store’s rank of free apps, Starbucks is currently the highest ranked app from the food/beverage retailer category, and is the third highest retailer behind Amazon and Wal-Mart.2

Since its launch in 2009, the Starbucks mobile app has grown from a basic mobile payment app into an integral part of the Starbucks digital ecosystem.

After the 2008 recession, as part of the company’s turnaround plan, then CIO Stephen Gillett created an “internal venture capital-style incubator for digital technology”, called Starbucks Digital Ventures, and gave this internal team the autonomy to operate separately and build digital assets.3

One of the biggest challenges facing Starbucks is declining foot traffic in shopping areas as consumer shift more to e-commerce. Although this doesn’t impact the morning coffee run as much, a lot of Starbucks’ business has historically depended on being an “interceptor” and luring nearby shoppers into the Starbucks store.

In response, Starbucks is trying to adjust its business model to make the store more of a “destination” and is leveraging technology to drive continued traffic to the stores. 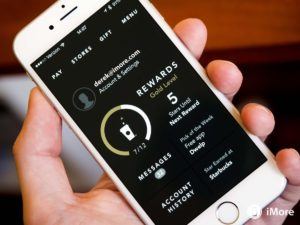 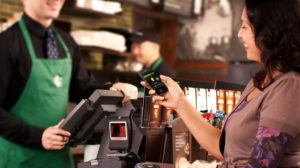 Starbucks is using the mobile app to attract and retain its loyalty members, who are stickier, more frequent customers, and overall higher spenders. Customers must sign up for the loyalty program in order to use the convenient mobile payment function. The loyalty program, My Starbucks Rewards, is integrated into the mobile app so customers can earn and redeem their loyalty points (“Stars) directly on the phone, increasing engagement. Unlike many other retailers, Starbucks customers don’t have to carry the physical membership card or tell the cashier their phone numbers each time to search up their membership information. The program has been a large success, with ~12 million active members in the US today. 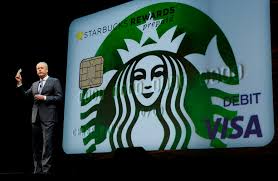 Recently, Starbucks has announced partnerships with other companies (e.g., Spotify, Lyft) and pending launch of the Starbucks Rewards Prepaid Card with Chase Bank. These partnerships will allow customers to earn Stars through non-Starbucks purchases and drive return traffic to Starbucks stores to redeem rewards.4

In addition, mobile payment has provided some side financial benefits for Starbucks. The balance on customers’ Starbucks Cards has grown to be an important source of working capital, and the Starbucks Card as a form of tender (during mobile payment) allows Starbucks to pay lower transaction processing fees as the merchant.3 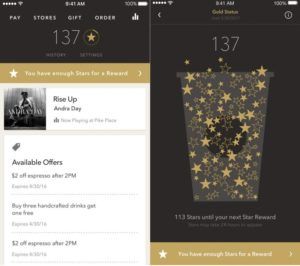 The company is leveraging the customer data it collects from the app to then provide more personalized and relevant product offers, sent through the app or via email. In the most recent earnings call, COO Kevin Johnson revealed that personalized offers “more than doubled customer response rates over previous segmented email campaigns…. [leading to] more customer engagement and spend”.5

Because a significant portion of the business comes during the morning hours, Starbucks’ operating model emphasizes short throughput times to move customers quickly through the line. To continue its fast growth, Starbucks must continue to increase store traffic and essentially serve more people in the same time frame. However, Starbucks observed that when stores become very busy, some customers will balk at the long lines and decide against going in. 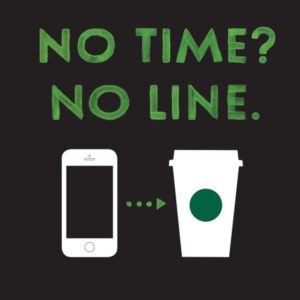 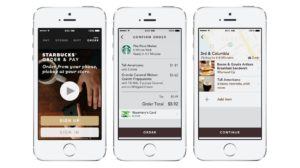 The ordering and payment process at the cashier is the bottleneck, and the transition to mobile payments, representing 25% of total transactions5, has reduced time at the register. In September 2015, Starbucks launched Mobile Order & Pay (MOP), allowing customers to order ahead on the app, bypass the line entirely, and go directly to the store’s pick-up counter for their drink.7 Barista labor is reallocated from the register and the stores can maximize customer orders with a similar level of labor. Furthermore, Starbucks may attract brand new customers who previously didn’t think they had the time to stop by Starbucks.

Going forward, I believe the company must continue refining the MOP function to replicate more of the in-store selling process, where customers are “upsold” to buy a muffin along with their coffee, or simply make an impulse purchase of the candy bar at the register. In addition, the company can consider digital menu boards connected to the POS system so stores can change prices more quickly or do more impromptu promotions to manage the store inventory. On the E-commerce front, Starbucks needs to leverage technology to lower fulfillment and shipping costs. It still offers high rates for standard shipping, and is losing to retailers such as Wal-Mart and Amazon that have invested in faster shipping that consumers now demand.

How Many People Are Killed by Police?