The $99.6 billion video game industry is currently at an inflection point. 2016 is expected to be the first year that revenue from mobile gaming surpasses that of PC gaming [1]. Companies such as Zynga, King, and Supercell generate billions of dollars making freemium games for tablets and phones. On March 7, 2016, Supercell announced that have reached the 100 million active daily user count [2]. 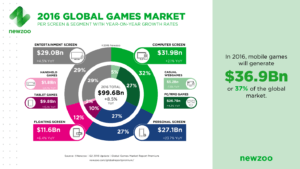 Digitization has undoubtedly been a boon in PC and console gaming as well, not only due to improved graphics and gameplay, but also because of internet-connected services and features. In the past 48 hours, for example, Steam has seen between 12 and 7 million active users online [3]. Microsoft’s Xbox Live has 48 million paid subscribers and Sony’s Playstation Network has 65 million [4][5]. Sony and Microsoft have both publicly stated intent to further grow their online network subscriber base through additional services and support.

Internet connectivity not only allows for gamers to play with or against each other to create a more dynamic gameplay environment, but also provides publishers the opportunity to disseminate patches, updates, and expansions. The ability to instantly provide updates and improvements is an amazing tool for publishers and is something that is starting to move into other industries as software and internet connectivity play bigger roles in devices and equipment. For example, Tesla has significantly improved the performance of its vehicles (and enabled auto-pilot) through software updates [6]. At first, these extra benefits were welcomed by the gaming community, but in recent years publishers have been taking advantage of their ability to push these fixes by releasing software that has been politely described as ‘incomplete’.

Microsoft and Sony’s 2013 console releases were marred by required updates that had to be installed prior to using the brand-new systems. Countless high profile games such as those in the Halo and Grand Theft Auto series have also either required day-one patches or were quite buggy upon release. Grand Theft Auto V’s online gameplay was not only marred by insufficient servers upon release in 2013 but also glitches that made the game unplayable for many gamers. Similarly, games will be released with less content than originally planned (or advertised) so that the publisher may sell future expansion packs.

A prime example of this short-changing is the recent release of No Man’s Sky by independent publisher Hello Games. The game, first officially announced at the E3 conference in 2014, boasted a procedurally generated universe (18.6 quintillion planets!) that players would be able to explore and conquer [7]. Pre-release marketing, including a high-profile demonstration on The Late Show with Stephen Colbert, showed off many features that indicated the game would be revolutionary. Excited, gamers flocked to pre-order the title (which is yet another way that publishers take advantage of gamers) to ensure they could begin playing immediately upon release as well as get the bonus content that comes with pre-orders.

Things began to unravel for Hello Games just over a month before release, when the Reddit page dedicated to the game found leaked information that the release would be pushed back from late June to early August [8]. Players (especially those who preordered) were upset, but willing to wait to ensure the game was as good as it could be. But some on the Reddit page were right when they assumed things weren’t quite what they seemed behind the scenes. Upon the game’s eventual release, players were dismayed that the game lacked many of the features that had been demoed, announced, or hinted at by Hello Games. The Reddit page was suspended due to the vitriolic messages being posted and websites such as onemanslie.com and blog posts titled The difference between No Man’s Sky’s trailers and reality, in one video were created to detail the game’s shortcomings [9][10].

Hello has promised to fix many of the game’s issues and add in some of the features that were expected to be included in the original title, but it may be too late. The below figure shows the rapid decrease in peak concurrent players on Steam, which shows how quickly players were turned off from the product that was initially released [11]. 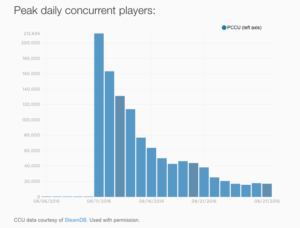 There are several consequences that have come about due to the No Man’s Sky debacle. The United Kingdom Advertising Standards Authority is investigating the promotion of the game, although many in the industry are not confident it will bring about any changes or action against Hello Games [12]. Additionally, The Game Awards 2016 announced that it will focus more on actual in-game footage to promote upcoming games to avoid misleading marketing [13].

Though misleading gamers seems to be a minor consequence of the effects of internet access in gaming, it sheds light on the fact that consumers in other industries can be similarly taken advantage of. (798 words)