As American consumers continue to embrace technology into all aspects of their lives, digital ordering may seem like an obvious choice for any retail restaurant company looking to grow its customer base, but this transition could result in a number unanticipated challenges for the industry.  Fast casual restaurants, which have seen their popularity increase dramatically in the last decade, face a particularly difficult trade off as they balance increased access with the promise of high levels of customer service.

Panera Bread, a popular fast-casual restaurant in the United States that has long prided itself on providing high levels of customer service, is facing this challenge head on.  Known within the company as “Panera warmth,” employees are taught to provide a welcoming and friendly experience, offering Panera as an “everyday oasis” away from life’s many stresses [1].

Delivering on this customer promise has rewarded both guests and shareholders.  As of May 2016, Panera served ~8.3 million customers a week, had ~97,000 employees, operated in 46 states and Canada and had nearly $5 billion in annual system sales [1].  For shareholders specifically, the company’s stock (PNRA) has outperformed the industry over the past 20 years [1].

After weathering the financial crisis well, many Panera cafes faced the issue of long order lines and long production wait times during peak traffic periods; mainly during lunch [2].  In 2010, CEO Ron Shaich began to view digital ordering as a solution and the company began investing in and testing a variety of platforms.  Ultimately, the company envisioned customers placing orders across a range of digital platforms including, web, mobile and in café kiosks.  This initiative became known as “Panera 2.0.” 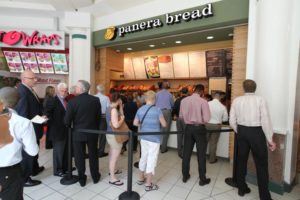 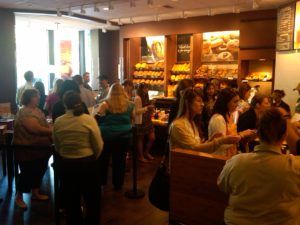 Panera 2.0 began testing in the Boston area in 2011 and quickly expanded to an additional 15 cafes in Charlotte, North Carolina [3].  By mid-2013 the company was testing its fully integrated platform, allowing customers to order in café via Kiosks, online via the web or through a mobile app.  The idea of providing so many access points to customers was twofold: 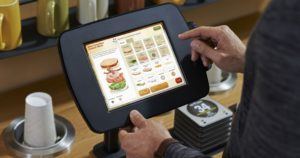 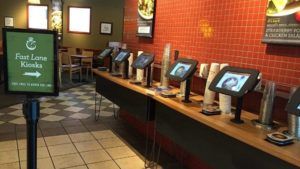 After rolling out web and mobile ordering to all company owned café and installing kiosks in over 450 company owned cafes, digital utilization rates reached 22% in Q3 2016 with the company claiming to fill 125,000 – 130,000 eCommerce orders daily.  By 2017 Panera expects to have $1 billion in annual digital sales, up from current digital sales of $650 million, representing a dramatic transformation from five years prior when it began testing the first version of Panera 2.0 [4] [1].

Although the success of Panera’s digital transition is impressive, it has come at a cost.  Developing such a complex web and mobile ordering system and designing and installing a network of kiosks cost tens of millions of dollars, required additional training for employees and created unforeseen friction within the cafes.

One of the biggest concerns for the company has been ensuring customers feel the same level of “Panera warmth” they had prior to the rollout of Panera 2.0.  Most digital orders are to-go orders, which means more and more customers have limited contact with friendly cashiers or time to take advantage of the cafes relaxed and cozy atmosphere.  Customers feel more like simple transactions than valued customers and any accuracy issues that could have been easily fixed by a caring associate are now only angrily voiced via social media and word-of-mouth.  Equally as important, as customer orders have increased during peak hours, production times have also increased, causing frustration for customers who were promised that the new digital ordering system would save them time and stress. 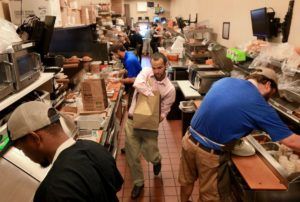 Employees are also increasingly concerned about losing their jobs to technology, although for the time being, Panera claims that its digital order platform will actually require it to hire more workers [5].  With the push for a $15 minimum wage gaining momentum, the company may have to change its position as it looks for labor savings to spare consumers from dramatic price increases.

For Panera to succeed as it continues its transition into the digital world, it will have to radically re-think its fundamental café design and labor deployment.  Many of its locations are restricted by physical kitchen space, limiting production capacity during peak times and increasing order errors [6].  Will Panera have to pull back on its commitment to digital orders? Or will it fully embrace the digital world and once again look to technology to solve its most pressing problems?