Since the invention of the game basketball teams have been run by “basketball guys.” As managers, these men judged players’ and teams’ performance through observation and decisions were made based on gut and experience.

Enter Daryl Morey. An MIT grad and former strategy consultant, Morey was not a “basketball guy.” However, he obsessed over two things: data and basketball. Morey became General Manager for the Houston Rockets in 2007 (think CEO). As GM for the Rockets, Morey has invested heavily in untried technology and has devoted his energies to gathering and analyzing large data sets.

Purists believe that basketball is a game of fluidity, collaboration and ingenuity, played by unpredictable and imperfect human beings: “Data and analytics have no place in such an inherently human thing!” Morey does not see the two inputs as binary, and contrary to popular belief he is not proclaiming a complete digital revolution in basketball.

Morey’s overarching thesis is that traditional methods of measuring performance were incomplete and misleading, consequently he has sought to use digital technology to collect more data AND to better understand what that data means. Morey seeks to use data to better enable the decisions that “basketball guys” make, providing new frameworks for evaluating performance.

How did we get here?

Traditional basketball stats were generic and often misleading. For example, players who compiled lots of points and rebounds were heralded without deeper thought as to how much those gaudy statistics translated to overall effectiveness. As new digital technologies emerged and exponential computing power became democratized, people like Morey and Billy Beane started paying attention. With Morey as GM, the Houston Rockets were the first team to install SportVU, an Israeli missile-tracking technology that uses tiny webcams installed in stadium rafters to record the x/y coordinates of each player thousands of times per game. Morey and his staff aggregate the immense data from SportVU into all types of statistics: how far a player runs, how efficiently they shoot from each spot on the court, how many times they dribble, etc. Every team in the NBA now uses SportVU, but few are as adept at making sense of it as Morey. The Rockets also use wearable devices such as embedded accelerometers to track player movement.

The Rockets use the data as a lens through which to look at how a player performs. For example:

Player A averages 20 points and 10 rebounds per game, with a 50% shooting efficiency. While player B averages 16 points and 7 rebounds and makes 45% of his shots. Player A is significantly bigger and ostensibly a better athlete.

Which player would you take?  Player A, right?

Advanced metrics might show you that player B is a more impactful contributor. What if player B’s true shooting percentage is higher than player A’s, his defensive efficiency superior, his rebound rate better?

For Morey and the Rockets, evaluation isn’t about raw totals, it’s about weighing the impact of each action a player takes.

New Operating Model: How Morey and others used digital tools to reimagine how teams and players should play

As new metrics pour in, managers, coaches and players have reimagined the way the game should be played on court. The 2015 NBA champion Golden State Warriors have embraced a “pace and space” strategy, spreading their players out and taking many shots in high efficiency areas (particularly corner 3-point shots). The Warriors’ Stephen Curry is an example of a player who has taken to heart information on the efficiency of a 3-pointer over a 2-pointer (albeit maybe not intentionally). As the 2016 NBA Most Valuable Player, Curry took more threes in a single season than any NBA team did from 1980-1994. 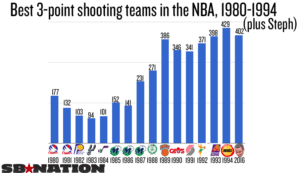 Morey has taken a more extreme approach. Using deep analysis to identify that the three most efficient shots were three-pointers (specifically from the corner), layups (near the basket), and free throws, Morey has steered his team to only take shots from those areas, and prohibiting “mid-range” shots (which have the lowest efficiency). Furthermore, Morey has built the team around the unique talents of James Harden, who’s natural style fits Morey’s strategy perfectly. 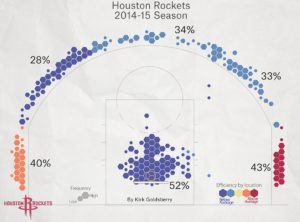 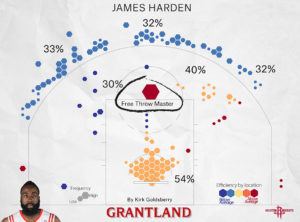 How has this worked out?

Overall, Morey’s teams have been competitive but not great. That said, almost all NBA teams now employ similar strategies to the Rockets (including the 2015 Champion Warriors).

Critics of Morey and the “nerds” point to the formulaic rigidity of analytics as improper for running a basketball team. Morey has been criticized for ignoring things like team chemistry when assembling a roster. He famously used a high draft pick on a player with anxiety disorder because the data said he was one of the best players in the draft (that player is now out of the NBA). Furthermore, in the 2016 NBA Finals the Cleveland Cavaliers beat the Golden State Warriors, despite the fact that the Warriors were superior in every advanced metric.

These results are not a referendum on the use of analytics, but just further proof that a great organization will not rely too heavily on either the art or the science. Statistical models are built on probabilities of voluminous events, and thus give great insight into what the best options for a basketball team (or business) are. That said, statistics cannot yet account for the vicissitudes of human performance or the intangibles of the game.

Daryl Morey does not think that he can build and coach basketball teams based purely on what the data tells him, but he does believe that traditional basketball minds have been looking at the game incorrectly.

Morey is doing what any good manager should do when their business meets digitization – he is asking questions. For Morey, it is not about the data, it’s about what the data means. He isn’t replacing the “basketball guys,” he is just making them smarter.

A Way for All Consultants to Stay Healthy on the Road