An industry is born

Clouds on the horizon

Climate change is shifting global hydrological patterns, increasing precipitation in some regions while decreasing it in others [4]. Unfortunately, many of Nestle’s key spring resources are located in drought prone regions, such as in Southern California (see Figure 1) [5], which experienced the most significant drought in state history from 2012-2017 [6]. While citizens faced severe water restrictions, Nestle extracted 700 million gallons of groundwater in 2015, resulting in petitions, lawsuits [8], and even plastic pitchfork-bearing protestors [8]. As Nestle continued operations, competitors, such as Starbucks, decided to end bottling operations in California in 2015 [9]. Additionally, for the first time in thirty years, the U.S. Forest Service reviewed Nestle’s permit to withdraw water from the San Bernardino Mountains [10]. 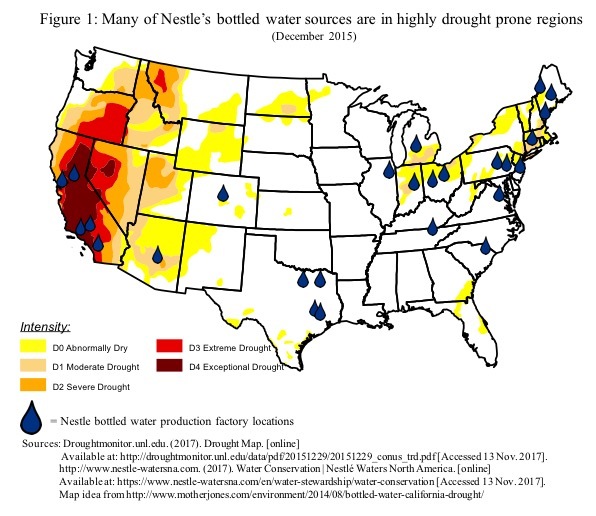 Nestle faces similar opposition elsewhere in the US (Michigan, Colorado, Arizona, and Washington [11])  and in Canada (British Columbia and Ontario) [12]. For example, in 2013, the Ontario Environment Ministry placed restrictions on Nestle’s water withdrawal permit [13] and proposed a “moratorium on new or expanded groundwater takings” [14] following protests about Nestle’s continued daily withdrawal of 1.1 million liters from the Hillsburgh Well throughout a 2013 drought [15].

In the short term, Nestle has responded by committing to internal water reduction goals while simultaneously working with governments to ensure continued access to water resources. For instance, amidst the 2015 drought in California, Nestle committed to an 8% water efficiency improvement in their California bottling through new technology investment [16]. In their non-bottled water factories, Nestle also invested in water conserving technologies, such as moving to “zero water” in their Modesto, California milk plant [17].

Finally, Nestle has attempted to engender goodwill with local communities through actions such as donating a $45,000 playground to the District of Hope, British Columbia – where it extracts 265 million liters annually [21].

As none of Nestle’s responses have addressed the issue of disappearing groundwater sources, there are three options that Nestle should consider:

First, Nestle should explore new water resources in regions where climate change is decreasing drought, such as in the Pacific Northwest and the Upper Great Plains, which could serve the Western and Midwestern markets, respectively. Figure 2 suggests some target regions for such exploration.

Second, rather than sourcing exclusively from natural watersheds, Nestle should explore technologies to convert non-potable water into bottled water. This concept is already used in water-strapped Israel and Singapore, and is gaining traction in the US [25]. For example, in June 2017, Orange County Water District was the first entity in the Western Hemisphere to bottle and distribute water from recycled wastewater [26]. Nestle already has much of the technical expertise to pursue this path, as it already employs reverse osmosis, micro-filtration, and ozone disinfection in its water bottle production facilities [27].

Finally, Nestle should build an active voice in the global water community. As water demand is expected to exceed sustainable demand by 40% by 2030, there will be increased discussion on how to correctly price water, which will likely result in price hikes [28]. While Nestle currently benefits significantly from the underpricing of water, it is vital they join the debates that will shape the future of water prices.

Climate Change is Mugging Your Coffee

Student comments on Clouds on the horizon? Nestle, climate change, and the future of bottled water.