The National Park Service has two objectives, both of which are uniquely vulnerable to the effects of a warming planet: conservation and tourism.

NPS employs 22,000 workers overseeing 84M acres of public land across 50 states. It is a major player in the domestic tourism industry, serving over 300M visitors a year and managing a network of 600 “concessionaires” that provide hotel, food, and recreational services.  [1, 2] Local communities are economically dependent on the parks: in 2015, park visitors spent nearly $17B, creating 295,000 jobs in these “gateway” regions. [3] 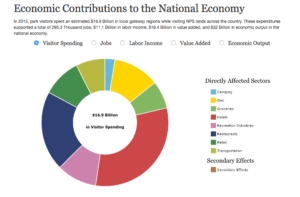 Climate change poses a threat to the Park Service in three distinct ways: the increasing destruction of ecosystems, unpredictable visitation to parks and park-adjacent communities, and the cost of updating park infrastructure.

From melting snowpack in Colorado to eroding shorelines in Alaska, unpredictable weather and seasonal patterns are threatening the very existence of the landscapes NPS seeks to protect. Scientists estimate that the largest of Montana’s Glacier National Parks’ eponymous glaciers will disappear by 2030; as sea-levels rise, the Everglades is seeing the retreat of freshwater species; the Forest Service’s “Smokey Bear Reports” show that longer, drier summers mean wildfires are more frequent, wide-spread, and longer lasting, sometimes resulting in park closures.  [4, 5,6] Wildlife in the Parks face grave threats if they fail to adapt speedily. [6] 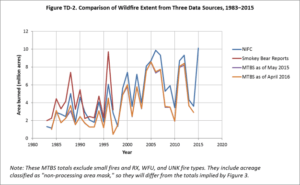 Visitation to National Parks is strongly tied to air temperature, with visitation increasing up to about 80°F, then declining as temperatures rise. Based on projected future temperatures, many parks can expect a dramatic increase of 8-23% in visitation as additional warm weeks are added to the calendar, and those parks that are already warm will see a decrease in visitors and a shift in “tourist season.” The difficulty of predicting climate change’s effects year-to-year will create uncertainty for the many parks that open facilities only for specific time periods. [7,8] 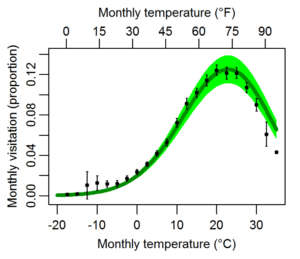 NPS states that climate change threatens “$40B worth of national park assets and resources.” [9] Adapting the infrastructure that supports NPS’s preservation and tourism work—sewage systems, roads, trails, hotels and amenities, some dating from the 1930s—is a costly proposal, especially as the Service can engage in only limited long-term financial planning: it depends on yearly Congressional approval. The 2017 budget for NPS, at $2.5B, includes just $5.8M for climate-related activities—which itself represents a $3M increase from 2016—as well as $49M earmarked for deferred maintenance projects. [10]

NPS is introducing bold new policies that encourage park managers to prepare for the unpredictable.

From Preservation to Activation

NPS has traditionally positioned its employees as stewards of America’s nature, more passive protectors than environmental warriors. Looking ahead, NPS is encouraging employees to actively study, create plans for, and invest in the park’s most vulnerable physical and natural assets. This plan includes a centralized effort to fund projects that demonstrate high climate-related vulnerability. [11, 12]

Designing for Sustainability and Unpredictability

Further, NPS is funding projects that anticipate extreme weather and can adapt accordingly: a new facility in the Everglades National Park was given an elevated design to avoid storm surges and sea-level rise. NPS is asking Park managers to consider designing movable structures, relocating highly-vulnerable assets, and integrating park services into regional infrastructure. [12]

Finally, NPS is partnering with adjacent land owners to create “landscape corridors” for flora and fauna that are seeking more suitable environments. [12]

While NPS is encouraging its employees to engage in “scenario planning” to anticipate “critical uncertainties”, the agency is also investing in understanding these unknowns. In partnership with universities, NPS is investing in scientific research into the effects of climate change and potential solutions. The parks are an integral part of this effort due to their enormous size and biodiversity, home to projects ranging from the diagnosis of coral loss to the tracking of elk migrations. [9, 11, 12, 13, 14]

There are additional steps NPS might consider in its future planning.

Firstly, NPS great physical footprint and popularity make it a potentially powerful educator for the general public about the changes ecosystems are experiencing. NPS should prioritize the vividly illustrating the real costs of climate change.

Secondly, NPS should translate this public education into a political movement. While NPS has many adaptation plans on paper, the Service requires budget to carry them out. That budget will only become available if voters pressure their legislators to make protecting America’s natural treasures a priority.

[5] National Park Service, “How Are the Saline Glades Changing?” https://www.nps.gov/ever/learn/nature/cceffectssalineglades.htm

[6] United States Department of Agriculture, “The Effects of Climate Change on Mammals.” http://www.fs.usda.gov/ccrc/topics/effects-climate-change-mammals

[11] The Atlantic, “How The National Park Service is Planning for Climate Change.” http://www.theatlantic.com/science/archive/2016/08/how-the-national-park-service-is-planning-for-climate-change/497042/

[13] United States Department of the Interior, “About the Climate Science Centers.” https://www.doi.gov/csc/about

GETTING MESSY BY GOING GREEN: THE UNINTENDED ECONOMIC BURDEN OF NET METERING POLICIES

Hershey’s Profits May Melt as the Earth Warms