The Conference of Parties21 (COP21) agreement that took place in December of 2015 marked a substantial turning point for global climate change policy and programs. Members of the United Nation Framework Convention on Climate Change (UNFCCC) successfully established that the current trend in climate change is everyone’s problem, and as such requires a globally aligned initiative to combat it. While the state signatories that make up the UNFCCC agreed that detailed action plans will be individually determined on a national level, the impact that each plan has on economic behavior will be largely uniform.  The most notable outcome of the agreement, is that all countries will use the same transparent system of measuring, reporting, and verifying emission information. Metrics for measurement are being determined by the Intergovernmental Panel on Climate Change. [1]

With these new systems of measurement in place, industries and companies alike will be required to respond to the mandates that are sanctioned by the participating government entities. International Flavors & Fragrances Inc. (IFF) is one such company. [2] CEO Andreas Fibig was one of the many business leaders that proactively attended the COP21 conference in Paris, showing support for the global initiative. Following the agreement in Paris, IFF set their sustainability plan in motion. Among a long list of freshly defined energy conscious principles and efforts, IFF included their involvement with the Roundtable on Sustainable Palm Oil (RSPO) and its association with multiple IFF facilities.

The RSPO was created in 2004 to serve as the sole regulatory agency for palm oil production. Since 1960 palm oil demand and has doubled each year, and in 2007 demand for palm oil surpassed soy bean oil, becoming the world’s dominate vegetable oil. [3] Even with the regulatory agencies in place, the global palm oil demand was 74.01 million tons in 2014 and is expected to reach 128.80 million by 2022, growing at a compounded annual growth rate of 7.3% during the time period. If these forecasts prove accurate, the market is expected to reach $88 billion USD. [4] 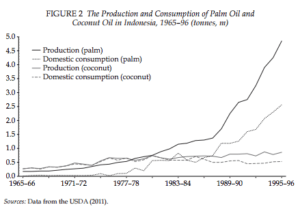 Suppliers cannot keep up with the growth in global demand. In response, palm oil producers in Indonesia and Malaysia are clearing massive portions of rainforest to make space for new palm oil production facilities. Enter the environmentalists. The deforestation is devastating, and undoubtedly has contributed to the climate change effects associated with the reintroduction of carbon into our atmosphere. It also doesn’t help that a newly planted tree takes about 4 years to produce an oil producing fruit. Unfortunately, one of the best practices for accelerating the process of increasing product yield is the burning and replanting technique in which, you guessed it, the less economical strands of producing palm oil trees are felled and burned to enrich the soil with organic matter. This is one of the first issues that the RSPO addressed and reduced after its formation.

The big problem though is the fact that the stuff is in nearly everything. If certain products aren’t created using petroleum based lubricants and oils, then palm oil is your next best candidate. The food industry is certainly the greatest consumer, but after edible utilization, the next popular use is personal care and cosmetics, followed by biofuel and energy. This places beauty companies in quite the pinch. Not only is cosmetic demand for the product driving negative environmental impacts in the form of deforestation, but all the oil that they use is also oil that the clean energy biofuel market is deprived of.

IFF isn’t alone though. Unilever, L’Oreal USA, and many more players from the cosmetics and toiletries industry have recognized the issues associated with palm oil related deforestation and are taking action to satisfy the requirements of the COP21. I can understand that the state signatories associated with COP21 would view the reduction of a luxury good as low hanging fruit in the journey toward more sustainable living. Unilever has relied on palm oil to make Dove soap, Vaseline lotion, and other cosmetic products, but recently has announced the substitution of algae oil to help combat the deforestation issues. [5]

It is still too early to tell if a shift away from the palm oil dependency within the cosmetics and toiletries industry is going to impact the volume or quality of products. However, at this point I think it is safe to assume that cosmetics will take a back seat to the food and biofuel in the battle against palm oil related deforestation.

Save the planet, drink more beer.

Student comments on Climate Change and Cosmetics: It’s Going to Get Ugly