Investing in Cinemark requires a strong stomach. In each of the past five years, the company’s stock has swung 25–55%[1] as investors have traded feverishly around industry attendance figures and the company’s quarterly results. 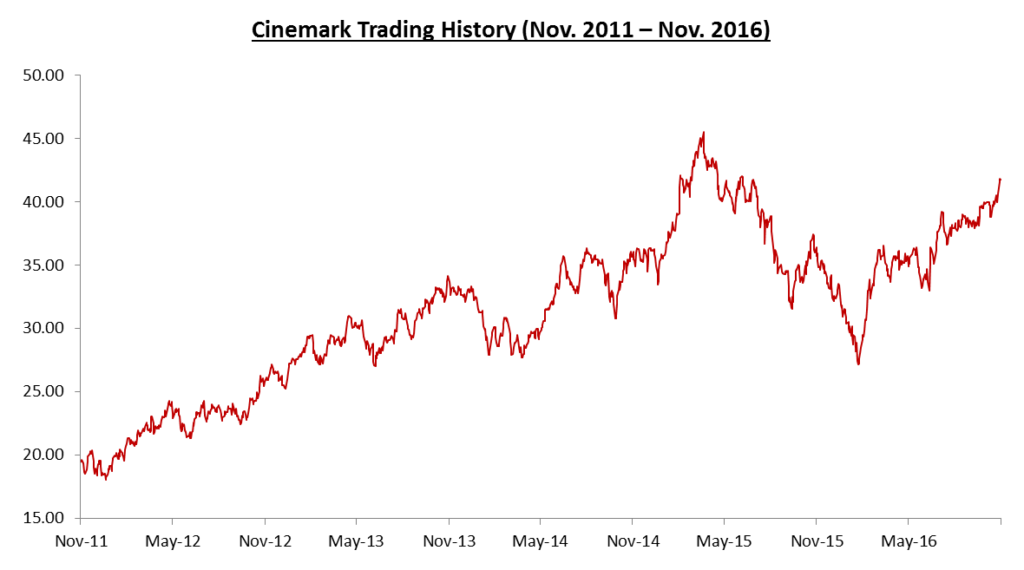 While several factors have played into the whipsaw action in investor sentiment, underpinning everything is the disruptive uncertainty brought on by the proliferation of digital media. In the United States, there’s no denying that attendance, the lifeblood of the industry, is in steady decline. Over the past decade, per capita movie attendance has dropped at a compound rate of 2% per year[2] as the number and quality of media options available at the push of a button has exploded. More and more, Hollywood studios and cinema operators alike are relying on a small number of blockbusters to attract massive audiences and drive the lion’s share of a year’s profits.[3] When a slate of blockbusters hits, the lions feast; when it misses, they starve. Hence, the roller coaster ride for Cinemark’s investors.

Despite its intra-year volatility, Cinemark’s stock has performed remarkably well over the past five years. Indeed, its share price today is more than double what it was at the end of 2011. It’s no secret that digital media has disrupted the cinema industry, and Cinemark’s ability to adapt to changing conditions has helped the company consistently outperform expectations.

Thus far, Cinemark has done an exemplary job of sustaining growth and profitability by tweaking its core strategy and adjusting its operating model. Going forward, however, I believe the company will need to do a more comprehensive job of harnessing technology to buck the trend of shrinking audiences.

Cinemark’s business model has traditionally rested on providing consumers with three things: (i) exclusive access to new content from Hollywood studios; (ii) a larger-than-life entertainment experience; and (iii) delicious, albeit dramatically overpriced, concessions. In the past, the company’s operating model has been very much in sync with this value proposition. Today, however, Cinemark and other cinema operators face strong technological pressure on two of these key fronts.

With regards to the first, the window of exclusivity has shrunk as Hollywood has dramatically reduced the time between a movie’s release in theaters and for in-home viewing.[4] Also, the emergence of on-demand content providers like HBO and Netflix has created serious competition for consumer mindshare. With regards to the second, the increasing affordability of home theater systems has eroded demand for the traditional movie theater experience.

The first and clearest way in which Cinemark has adjusted its strategy is by expanding into Latin America, where the penetration of digital media is considerably lower and audiences are still growing at a rapid pace. Since the mid-1990s, Cinemark has built a noteworthy platform as the number-one cinema operator in Brazil and Argentina and a leading player in Chile and Colombia.[5] This expansion has accelerated in recent years, as investment in digital projectors has allowed Cinemark to distribute films via satellite to remote cities that would have been impractical for expansion even five years ago.

The second way in which Cinemark has reacted is by investing in digital technology like 3-D theaters and IMAX-style screens to create an experience consumers simply cannot recreate at home. By charging a premium for these tickets, Cinemark has been able to maintain strong revenue growth in the US despite overall audience declines.[6]

Leveraging the flexibility afforded by digital projectors versus analog components, Cinemark has also started screening alternative content like classic films and live events. Based on a 2015 survey, over 60% of consumers expressed interest in seeing classic movies in a theater, while nearly 40% expressed interest in seeing live sporting events at the cinema.[7] By diversifying out of new releases, Cinemark believes it can meaningfully boost attendance in times of low demand.

While each of these adjustments has bolstered Cinemark’s performance in recent years, none of them has made a convincing dent in the long-term trend of audience decline in the digitally-saturated US market. The key to doing so, I believe, is in increasing engagement with existing customers to drive return trips to the theater.

Cinemark Connections, the company’s mobile app, is in its very early stages, but could be a powerful tool to offer targeted promotions and increase customer loyalty. 84% of US moviegoers already use mobile and internet-enabled devices to plan their trips to the theater[8] and by funneling customers through its own app, Cinemark could utilize purchasing history to structure personalized discounts for upcoming releases. In doing so, Cinemark could stimulate demand and drive revenues from both tickets and high-margin concessions, which customers could also order through the app. With strong data, Cinemark could partner with studios to develop its promotions and, by introducing flexibility into a traditionally rigid pricing scheme, dampen volatility in attendance and results.

Why Real Estate Brokers Exist in 2016 And Beyond

Student comments on Cinemark: On the Way Up…and Down