Numerous countries set to suffer the worst potential impacts from climate change are the least prepared [1]. Not so Chile: while Chile ranks as a top 10 most-affected-by-climate-change country [1], a University of Notre Dame study that provided the baseline for the 2017 World Economic Forum on Latin America found that Chile is among the 30 countries best positioned to deal with climate change [2, 3]. This essay examines how Chile’s Ministry of Energy is successfully subjecting renewable energy projects to market economics and providing a forum for fair competition and innovation by implementing an auction-driven pricing strategy. Whether the promised market outcomes can be delivered upon remains to be proven out.

Global warming is a serious concern for Chile’s Ministry of Energy. Chile is one of the top 10 potentially most affected countries by climate change, with climate change contributing to heat waves, extreme precipitation, and flooding of coastal areas, leading to forced population migration and destruction of land and marine habitats [1, 4]. The Ministry of Energy is legally mandated to ensure that clean sources represent 20% of power generation capacity by 2025 [5].

While providing quotas or feed-in tariffs for renewable energy has been a popular mechanism for encouraging renewable energy adoption in many advanced economies around the world, Chile’s Ministry of Energy is relying on an auction model whereby energy companies competitively bid on wind and solar power contracts [6]. Globally, prices of wind and solar energy are declining rapidly – utility-scale solar energy prices have fallen by 80% since 2010 [7]. 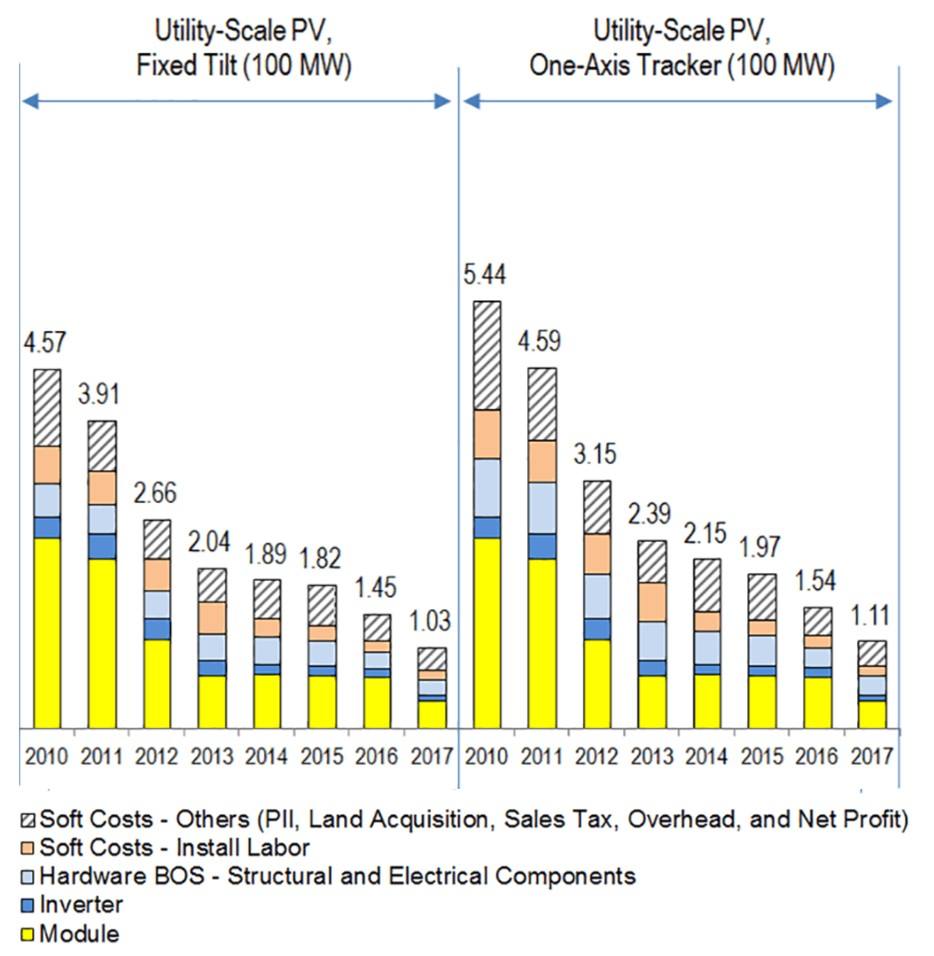 Conditions in Chile are even more favorable given that Chile boasts some of the highest rates of solar radiation in the world [8]. Chile’s auction model is powerful because it ensures that the government enters into market-efficient pricing contracts, both from a technological and geographical standpoint. While global average costs for utility-scale solar energy currently are around $50-$60/MWh [9], Chile’s auction model has encouraged for local pricing to reflect the benefits of favorable conditions in e.g. the Atacama desert, with the Ministry receiving a record-low bid of $21/MWh in a recent bidding round – the second lowest in the world after Saudi Arabia [10]. At these rates, solar energy is financially significantly more attractive than coal-powered energy bids recently received at the $60-$70/MWh level [11]. Against a global average of levelized costs of energy, regardless of geography or source of origination, these costs are extremely competitive [9]: 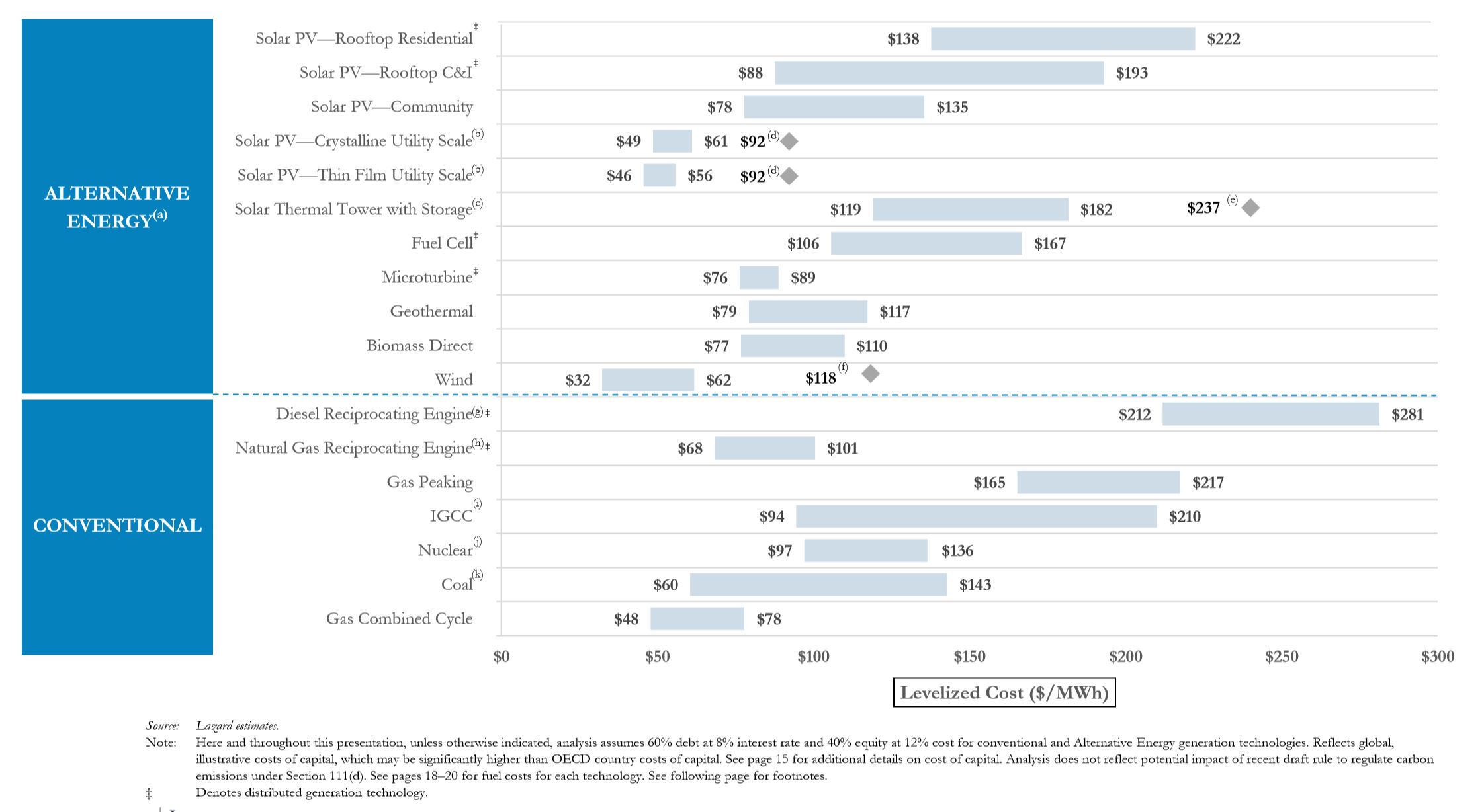 Not only does the Ministry of Energy attempt to grow renewable energy as a share of the overall power mix and drive towards economically viable outcomes, but the Ministry is also addressing the longer-term problem of intermittency. For renewable energy to become 100% of the power mix, we must find a way to have consistent production from renewable energy – not just production whenever locally, the wind blows or the sun shines [12]. This can among other things be achieved through energy storage or energy transmission. The Ministry of Energy is encouraging a long-term focus on these issues by supporting projects like the 24/7 solar plant in the Tamarugal region: the solar plant has in-built over-night energy storage via a newly developed molten sand technology [13]. The Ministry has also been accepting mixed wind-solar project proposals, which reduce sole reliance on either of the elements [14].

Apart from the encouraging steps that the Ministry is taking already, I think the Ministry could also focus on virtual power plants. Virtual power plants can intelligently ramp production up or down depending on wind conditions and power consumption, which helps with grid reliability and also provides services such as power balancing, import and export of power, and voltage control [15]. Virtual power plants could be integrated across the country and then intelligently distribute energy as needed. Especially given the rapidly changing weather conditions throughout Chile, a virtually integrated power plant network could significantly reduce intermittency concern.

To me, the single largest outstanding concern is that while the auction model has produced historically low prices, the prices are based on forecasted required electricity delivery rates, and thus inevitably bake in expected cost declines in the industry. I worry that in an attempt to win auctions, energy companies bid unrealistically low prices that they then cannot deliver on. This is exemplified by Abengoa, the parent company behind some of Chile’s most promising solar projects in the Atacama desert, having filed for bankruptcy recently [16]. Additionally, with coal prices increasingly falling out of favor in the developed world, a demand-driven lower pricing spiral may persist, making coal generation competitive with renewable projects, and challenging wins based on economic superiority. (763 words)

[16] Hals, Tom and Tracy Rucinski. “Abengoa unit files for U.S. bankruptcy with up to $10 billion in debt.” Reuters, February 24, 2016. https://www.reuters.com/article/us-abengoa-bankruptcy-usa/abengoa-unit-files-for-u-s-bankruptcy-with-up-to-10-billion-in-debt-idUSKCN0VX2OH