Policy and Digital Transformation in the U.S. Healthcare System

Digital technology has dramatically transformed our everyday lives, but, in the bureaucratic maze of the U.S. healthcare system, widespread adoption of even the most basic healthcare information technology (IT) had been sluggish. In 2009, roughly 75% of Americans had a computer in their home [1], but only 22% of office-based physicians and 12% of non-federal acute care hospitals had a basic electronic medical record (EMR) system [2, Note 1]. The U.S. government decided to use policy in attempt to close this staggering technological gap, and the Health Information Technology for Economic and Clinical Health (HITECH) Act of 2009 was born.

Under the HITECH Act, Medicare and Medicaid providers, such as hospitals and clinics, were financially incentivized to become “meaningful users” of EMRs, since high upfront implementation costs were needed before benefits – such as improved patient and disease management, increased productivity, fewer medical errors, lower costs, and better diagnoses and patient outcomes – could be realized. Adoption of EMR systems significantly improved, resulting in 78% adoption of an EMR system by office-based physicians by 2013 and 48% adoption of a qualifying EMR system [3]. As of May 2015, more than 468,000 Medicare and Medicaid providers (87%) had received $30.4 billion of payments from the HITECH Act [4]. Given the recency of widespread EMR adoption in the healthcare ecosystem, full-scale benefits have yet to be achieved, but certain companies have come out on top of this digitization trend. 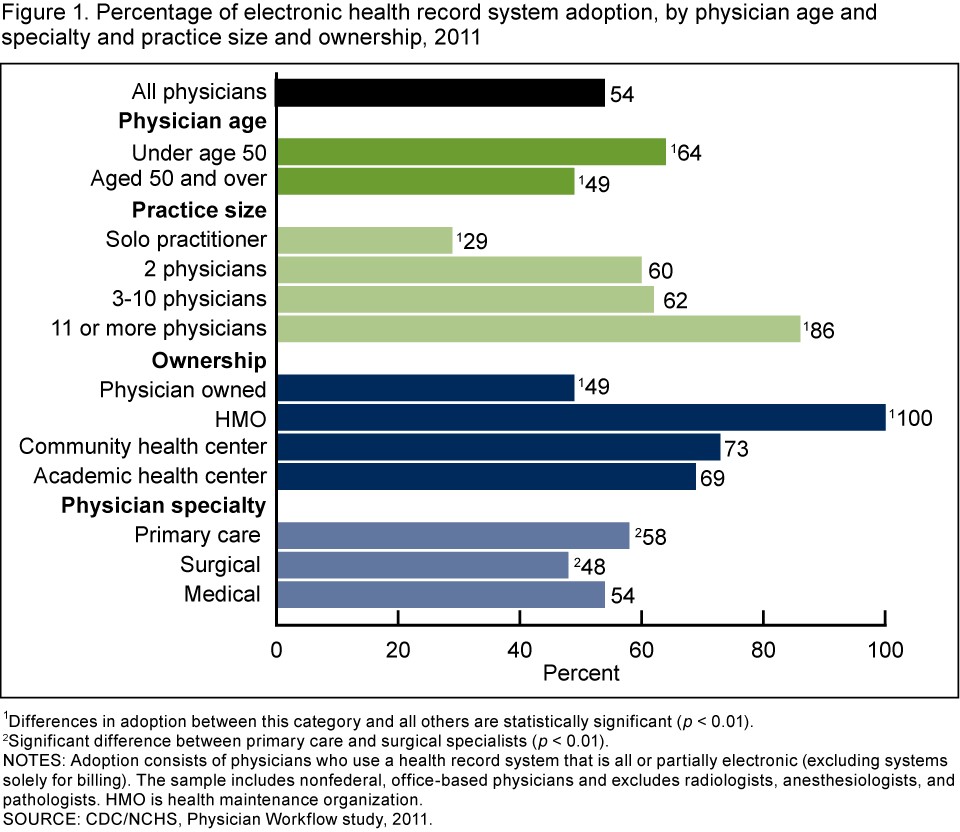 Cerner: The Early Bird Gets the Worm

Founded in 1979, Cerner was one of the earliest companies to recognize the opportunity to help hospitals coordinate mission-critical patient care with medical information shared across a common platform. By the 1990s, Cerner decided to unorthodoxically organize large amounts of medical data by patient, instead of by physician, issue or payment, thus paving the way for the development of comprehensive EMRs [5]. Today, Cerner has the largest market share of the $27 billion EMR industry [6] and is also the world’s largest publicly traded health IT company with $4.4 billion revenue in 2015 and its solutions licensed at more than 25,000 facilities in over 35 countries [5]. How is Cerner winning?

Cerner’s value proposition to its customers is simple: Cerner’s EMR system can improve patient care and increase efficiency for the medical care team since they can access patient information at any time at any venue on the health system network. The Cerner EMR system is built on the HealtheIntent cloud-based platform providing the enterprise-wide, multi-facility, longitudinal EMR. This integrated database provides real-time access to patient medical history and results as well as clinical information across care disciplines, while also complying with regulatory patient confidentiality requirements. The recent $1.3 billion acquisition of Siemens Health Services in 2015 further augmented Cerner’s hospital information and EMR systems.

Cerner’s newsworthy Department of Defense (DoD) contract win in 2015 exemplifies many qualities that makes Cerner a game-changing digital healthcare player. Why was Cerner selected over a large competitor, Epic Systems, to replace the DoD’s legacy health IT system in 55 hospitals, 600 clinics and multiple military locations [7]? At the cornerstone is Cerner’s interoperable and integrated EMR system, a key differentiating factor in Cerner’s business model. Not only is its architecture more modular and flexible to suit DoD’s needs, Cerner is one of the founding partners of the CommonWell Health Alliance, which creates a secure nation-wide interoperability infrastructure for patient information sharing with other leading health IT providers. Epic Systems, on the other hand, decided to maintain its own separate, incompatible ecosystem of EMRs.

Cerner made a strategic operating choice to focus and deliver on interoperability and has amassed a wide range of customers including multistate health systems, accountable care organizations, government agencies, academic research institutions, physician private practices and critical access community hospitals. To serve this diverse customer base, Cerner also offers services such as implementation and training, remote hosting, operational management, support and maintenance, data analysis, and clinical process optimization among others.

Risks for the Future

As Cerner continues to expand its customer base and develop additional functionality within its EMR system, all players in this ecosystem stand to benefit – from physicians to patients and health system administrators, even Cerner itself. However, Cerner needs to ensure that its systems do not become an unwieldy time sink that threatens the efficiencies and cost-savings that digitization of patient information originally created. Epic Systems has already received significant and often public pushback from medical professionals and government officials [8].

Overall, such widespread digitization of patient health information can help solve a fundamental information supply and demand equilibrium issue in highly sensitive medical care settings. Digital transformation with EMRs can help save lives but we should also remain vigilant about cybersecurity risks that threaten the security of patient health data.

4 transformations in digital advertising that EVERY marketer should know. You Won’t Believe Number 3!

Student comments on Cerner and the Digitization of U.S. Healthcare Data