Beginning in 2010, a wave of protests across the Arab World toppled governments that had previously appeared impenetrable. The causes of these protests would be too numerous to list and elevating a single cause as the cause would be impossible. However, social scientists have demonstrated that climate change played a significant role in stirring social demonstrations through producing high wheat prices caused by volatile weather patterns in Russia and the Ukraine.[1] Despite this recent history, the Egyptian government today is avoiding the challenges posed by climate change, including the threat of more unreliable global wheat supplies.

With nearly 100 million people and 4% arable land, Egypt is one of the most densely populated countries in the developing world for its population size.[2] Due in part to these variables, Egypt imports more wheat than any other country in the world, and its domestic production only meets half of the country’s demand for wheat. According to an Egyptian 2011 government report, the productivity of most agricultural products, including wheat, is expected to decline by 9-20% due to higher salinity (62) and higher risk of droughts.[3] Therefore, climate change will likely cause Egypt to become even more dependent on foreign wheat imports.

Due to population demands and a domestic industry crushed by corruption and state incompetence,[4] Egypt is turning even more to imports to meet its citizens’ demands for wheat. The Egyptian Ministry of Supply recently announced imports of 7 million tons of wheat in 2017-2018, compared to 5.6 million tons in 2016-17 and 4.4 million tons in 2015-2016.[5]

Egypt’s recent political turmoil has exacerbated economic challenges and the last few years have witnessed a growing unemployment rate coupled with a significant devaluing of the Egyptian pound. Egypt’s current administration has been blessed with low wheat prices (see Exhibit 1 below), but even with these low prices they nearly had a shortage in 2016.[6] The cost of the government’s wheat subsidy prior in 2010/2011 was 0.8% of Egypt’s GDP, and if prices returned to the highs of that period then they will be facing an even greater cost than at that time.[7] 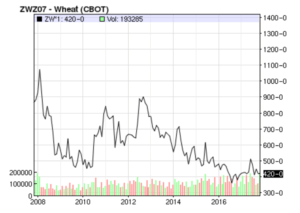 Egypt’s imports of wheat are managed by the Ministry of Supply. The current government do not seem to have planned effectively for the likelihood of higher and more volatile wheat prices. In 2011, Egypt published a detailed “National Strategy for Adaptation to Climate Change,”[9] however the recommendations made in that document do not seem to have been adopted by the government that rose to power in 2013. The ambivalent attitude of the current administration to climate change mitigation is perhaps best demonstrated in their vague and generic contribution to the United Nation Framework Convention on Climate Change.[10]

I recommend that Egypt’s Ministry of Supply adopt the following steps: 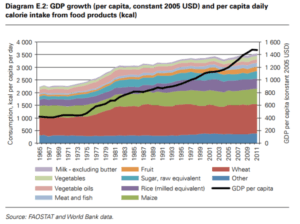 In closing, I would like to approach Egypt’s challenges with two solution-oriented lines of inquiry.

First, solving this issue will require more than just business knowhow or economic policy, but also political willpower and societal change. After all, Egypt is a subsidy-addicted country with a volatile and unstable recent political history. Are there any countries that have successfully shifted away from agricultural subsidies in similar circumstances in recent history?

Second, I think we need to acknowledge the occasionally contradictory requirements of mitigating climate change versus preventing climate change. In the developing world, mitigating the effects of climate change often entails adopting more of the carbon-intensive activities, like infrastructure development and manufacturing, that are causing climate change. For example, the Bank Information Center, an NGO that monitors DFIs, recently accused the World Bank, which has elsewhere funded climate mitigation, of pressuring Egypt to adopt policies that exacerbate climate change.[13] How can the international community support poorer countries to mitigate the risks to climate change that are specific to their country while still participating in global efforts to reduce carbon emissions? Do we need to pick a priority? (798 words)

Preventing the next E. Coli outbreak with Blockchain

J.B. Hunt: Leading the Way into the Age of Digitized Trucking

9 thoughts on “Can Egypt Weather the Next Round of High Wheat Prices?”