Recognizing the shifting regulatory and social landscapes of climate change, Dow Chemical has already started to take ownership of its carbon footprint. In fact, vice chairman Jim Fitterling says, “Dow is always looking for win-win solutions – good for the environment and good for business” and that “adding large scale renewable energy… is just one smart move… [for] improving our overall carbon footprint.” Dow has committed to invest in new wind farm technology and infrastructure for its largest production site located in Freeport, Texas, which will position itself as the third largest corporate buyer of wind energy in the US. Dow believes that this move will give the company a cost-competitive advantage in the future by hedging its energy portfolio4. Dow has also committed to maintaining greenhouse gas emissions at or below 2006 levels on an absolute basis. This means that as the company grows, it will continue to decrease its consumption of fossil fuel based energy sources2. So far, the company has managed to exceed this goal and deliver on its promise (see Figure 1 below). 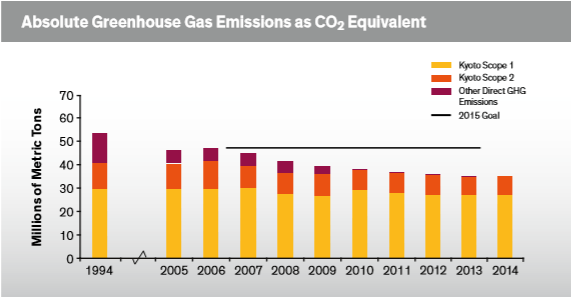 However, shifting a portion of the company’s energy portfolio from fossil fuels to renewables will not eliminate greenhouse gas emissions. Recently, Dow has divested from renewable chemicals research, plant based feedstocks that would have a much smaller carbon footprint over their value chain lifetime5. Dow argues that the economics of these renewables did not make sense for the company, it was simply too costly and ineffective. That very well might be the case. However, by not reinvesting in other R&D categories that could reduce greenhouse gas emissions, Dow is doing itself a disservice.  Assuming increasingly stringent greenhouse gas emission regulations into the future, the company will eventually have to adopt technology to fundamentally change how it processes chemicals and how it destroys waste. This adoption process will most likely be slow and costly: taking a more proactive approach today will prevent an accumulation of insoluble costs tomorrow.

So is there a Win-Win?

Spending in research and development for new technologies should yield “win-win” solutions for Dow over a long enough time horizon, which is in line with the company’s strategic position on how to tackle climate change within industry. For example, carbon capture and re-use technologies are currently inefficient and ineffective. However, with sufficient R&D investment, there is reason to believe that breakthroughs are possible and potentially imminent6. These types of investments in technology, if successful, would provide companies with a real competitive advantage – the ability to capture and re-use carbon. Dow is particularly advantaged by such technologies because of its size. For every waste stream that can be efficiently recaptured and reprocessed for additional value, the savings are magnified by the scale of the company.

Ultimately, most for-profit businesses will only invest in projects and technology that stand to deliver shareholder value. Dow Chemical’s method of addressing climate change by looking for win-win solutions within the company that make the most impact is a great starting point – in fact, it’s a required starting point. Dow now needs to take the next step to look at long term R&D investments as opportunities and even as necessities. The chemical industry, in its current state, is built around the consumption and emission of carbon and greenhouse gases. In many ways, a fundamental shift in the way we think about climate change will eventually require a fundamental shift in the operations within the industry. That change will not happen by simply shifting energy portfolios. It will require a dedication to research, an investment in new technology, and time.

[3] Parrish, M. (2015). How chemical companies are part of the solution — and problem — for climate change. Industrial Maintenance & Plant Operation, Retrieved from http://search.proquest.com.ezp-prod1.hul.harvard.edu/docview/1680506407?accountid=11311

[4] Chemical companies; dow to become one of the largest industrial buyers of renewable energy. (2015). Energy Weekly News,152. Retrieved from http://search.proquest.com.ezp-prod1.hul.harvard.edu/docview/1666333814?accountid=11311

You Can’t Ski Without Snow

Student comments on Can Chemical Manufacturers Take the Heat?