The problem of counterfeit drugs

Counterfeit drugs, with sales ranging from US$163 to $217 billion, are the most lucrative sector of the global trade in illegally copied goods[1], and adversely impact both consumers and pharmaceutical companies.

As for consumers, thousands of people every year die or suffer health problems after taking counterfeit drugs.[2]

From the companies’ perspective, counterfeit drugs impact their reputation, as well as damage their bottom lines. Drug manufacturers lose about US$ 205 billion annually in sales[3], and also spend large sums of money on marginally effective anti-counterfeiting measures.[4]

To tackle this issue, the U.S. Congress enacted the Drug Supply Chain Security Act (DSCSA) in 2013, which requires the pharmaceutical industry to adopt, by 2023, an “interoperable system” which will allow the FDA to identify and trace prescription drugs as they are distributed in the U.S..[5]

The task is far from simple: the industry will have to work together to create common standards and improve downstream communication. Manufacturers, packagers, wholesale distributors and even third-party logistics providers will play a role in creating this new system.[6]

Can blockchain help solve the problem of counterfeit drugs?

In the context of a supply chain, blockchain can be used to track the flow of goods and services between businesses and across borders.[7] This means that, at each step of the distribution process, a network of computers can vouch for the provenance and authenticity of a shipment—making it harder for thieves to unload stolen medications, or for counterfeiters to introduce fake wares.[8]

An important advantage of using blockchain is its reliability: it is virtually impossible for malicious actors to alter the event logs. Another advantage is speed: should a shipment be disrupted or go missing, the data stored on the common ledger provides a rapid way for all parties to trace it, and determine who handled the shipment last.[9]

Pfizer’s involvement in the MediLedger project

Pfizer has teamed up with Genentech (member of the Roche group) and other pharmaceutical companies to introduce the MediLedger project, a blockchain platform to prevent counterfeit drugs from entering pharma supply chains.[10]

If the project meets its goals, everyone from drug makers to wholesalers to hospitals will be recording drug deliveries on a blockchain: its aspirations go beyond DSCSA compliance, and the participants hope to use their system to help fundamentally move the industry forward in improving drug security and preventing the production and trafficking of counterfeit drugs globally. 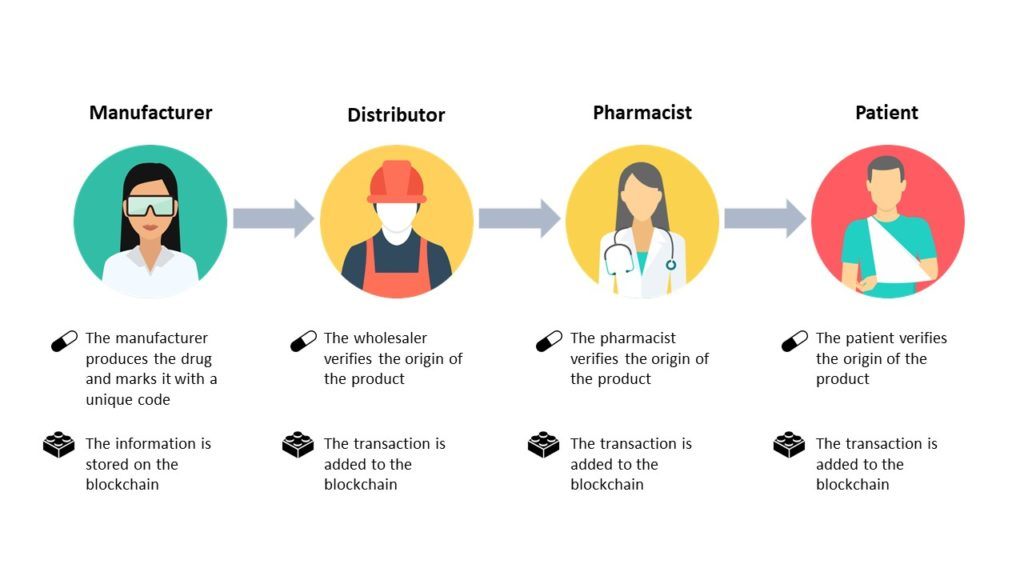 While is it promising that major pharmaceutical players are involved in the project, introducing a blockchain system – in which each participant controls a node in the network – will be challenging in the pharma industry, where large conservative companies dominate.[12]

If the project succeeds, it will undoubtedly disrupt the pharmaceutical industry. However, some additional issues about blockchain will also need to be considered:

[14] Michael J. Casey and Pindar Wong, “Global supply chains are about to get better, thanks to blockchain”, Harvard Business Review.

From Hype to Reality: How IoT (Internet of Things) is Transforming Pharma

7 thoughts on “Can blockchain help solve the problem of counterfeit drugs?”