Human activities over the past century have increased the amount of CO2 in the atmosphere significantly.

Increase in CO2 in the atmosphere leads to an increase in the greenhouse effect and thus increasing temperatures on earth. Rising temperatures are the cause of rising water levels, melting of polar caps and erratic weather patterns.

Around one fifth of the emissions are from industries such as cement, iron and steel, chemicals and refining. Over the next few decades this is expected to grow with output. The process of making steel from iron ore involves heating the ore with carbon. Carbon dioxide is produced as a by-product of this process. 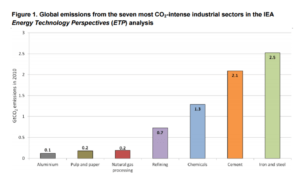 ArcelorMittal is the world’s largest steel producer, with annual production capacity of approximately 114 million tonnes of crude steel. Steel shipments in 2015 totaled 84.6 million tonnes. It has steelmaking facilities in 19 countries, and is the leader in all the main steel markets. A large number production sites for ArcelorMittal are present in Europe.[1]

The European Union uses the emissions trading system (EU ETS) as a primary tool to limit climate change. A cap is set on the total amount of certain greenhouse gases that can be emitted by installations covered by the system. Companies can receive or buy emission allowances which they can trade with one another as needed. They can also buy limited amounts of international credits from emission-saving projects around the world. After each year, a company must surrender enough allowances to cover all its emissions, otherwise heavy fines are imposed. If a company reduces its emissions, it can keep the spare allowances to cover its future needs or else sell them.[2] While the steel industry has not been impacted by specific stringent regulations, there is a chance that in the future they will be asked to comply to emission norms which are tighter than the current norms.

The implications of ETS and future regulations are multi- fold for European steel companies like ArcelorMittal.

What has ArcelorMittal done?

ArcelorMittal has recognized the need to become more energy efficient and has invested in researching newer and more efficient methods to produce steel. The company is also designing products which have a lower carbon footprint during their lifetimes rather than just focusing on the production processes. It is partnering with customers to ensure that its products will help reduce global carbon emissions over a longer time. Carbon footprint can also be reduced indirectly by using decarbonized electricity(hydroelectric power, nuclear power plants or power from renewable energy sources).[4]

The future for ArcelorMittal

The steel industry in Europe has managed to cut down its emissions by about 14 percent from 1990 to 2010.  There is however a limit to how much efficiency can be increased with current technology. There is need for either a major disruption in the production technology or to find ways to remove carbon dioxide produced. A couple of measures in this regard are listed below:

The future of the steel industry is contingent on how countries around the world react to climate change and what regulations are put into place. In addition, the demand for steel is also susceptible to different materials that can potentially disrupt dependent industries. Companies can ArcelorMittal need to be aware of the challenges ahead and start working proactively to counter these effects.

Keep on trucking: An overlooked lever for sustainability

2 thoughts on “Can ArcelorMittal Steel Itself Against Climate Change Regulations ?”