David Cameron’s last words as the Prime Minister of the United Kingdom, 2016

Will the same event that ousted Mr Cameron, the “Brexit” vote, also put an end to another chiefly British dream for the future – an all-electric Mini produced in the UK? The answer will lie with BMW, a German car maker and owner of the Mini brand and its decisions around the design of their supply chain. What are the most important dynamics at this critical juncture?

Why is Brexit of concern to BMW? 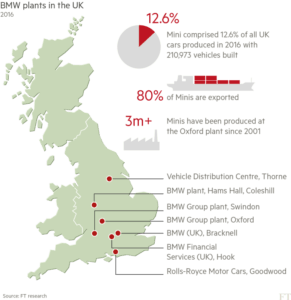 Car production features some of the world’s longest and most complex supply chain networks spanning multiple countries or even geographies. If no agreement is reached in the UK-EU negotiations, the tariff system would default to the WTO-stipulated tariffs of 10% on vehicles and 4.5% on parts, which given the average margins of 5-10% in the European car industry [2] could be business-model-changing.

There is some hope in savings on labour with the Sterling down ~15% since Brexit, but firstly, it is a gamble as future rates are by no means guaranteed, and secondly, it will still not make the customs controls go away, which may cause major supply chain hiccups. For factories that only hold inventory for half a day worth of production, the unpredictability of the goods flow introduced by customs processes will require them to keep more stock. This will be costly.

What is the management doing to address the issues caused by Brexit?

In the short term, BMW does two things – neither of them productive or desirable in the long term.

Firstly, it is waiting. Although it announced it had selected to produce the all-electric Mini in the UK, it was only after warning earlier that it is considering making the car on the continent.[3] Similar statements of support came from other players, such as Honda and Ford, but feet-dragging in actual following through with these vows is evident in the data – investment in the sector fell by 75%[4] over the last two years.

Waiting for uncertainties to be resolved may well be the only option left for BMW, but it is nevertheless painful as other manufacturers unhindered by the Brexit difficulties, such as Tesla or Mercedes, steam ahead gearing their supply chains towards the electric vehicle era.

Secondly, BMW joins other carmakers in petitioning the UK government to provide “urgent clarity” on EU trading relationship. However, it is difficult to see how upping the stakes for the government already desperate to deliver good news from the negotiation table could be productive beyond winning some short term concessions.

In the medium term, the company is re-evaluating its supply chain design to brace for potential fallout.

Firstly, there is a clear trend of localizing the supply chain. A recent report by the Automotive Council UK found that the UK factories source 44% of its parts locally, up from 41% in 2015[5]. Even though there are no specific reports that BMW also follows this trend, it can be reasonably expected that it does. Moreover, the German carmaker makes sure that the truly strategic core production processes are sheltered by confining them to the plants and contres of competency in Dingolfing and Landshut[6] in Germany[7].

What else should the management do?

In the short term, the management should develop contingency plans for the potential need to relocate the bulk of the production. Firstly, it can draw up a blueprint of what a factory relocation would look like from process perspective and make it as cost-efficient as possible before it becomes urgent, e.g. by making sure that the terms of employment of the engineering staff that will enable a smooth technology transfer. Secondly, it can also start scouting for alternative locations to sense the magnitude of concessions they would be able to achieve elsewhere.

In the medium term, the company should take steps to build more flexibility into the production process. Firstly, it should try to develop its factories in as more “portable”, i.e. easy to transfer if needed, similar to how GE is thinking about their plants.[8] Secondly, BMW should consider outsourcing more of the simpler processes it currently does in-house in order to transfer the risk to companies that may be better-suited to deal with it (e.g. more diversified between the UK import/export businesses).

But the line the companies need to tread when dealing with governments is admittedly fine, which begs two further questions:

[9] The quest for Brexit allies, German business lobbyists will not stop tariffs against Britain, The Economist (2017), https://www.economist.com/news/europe/21708720-unfortunately-brexiteers-bmw-cannot-tell-angela-merkel-what-do-german-business-lobbyists

“Are We There Yet?”: Solving the Los Angeles Congestion Indigestion

Inditex/Zara: Fast is the new slow