Boston, with its cold and snowy winters, might be expected to be one of the first cities to dismiss the threat of climate change and embrace rising global temperatures.  Sure the ski season would be a bit shorter, but summers on Cape Cod would last longer, the subway (known locally at the “T”) would suffer fewer shutdowns and the City could allocate money from its snow removal budget to more urgent needs.  Although this all sounds appealing, Boston, acknowledging that its fate is closely tied to the sea, has elected to take action against the impact of climate change.

Many areas of Boston sit near sea level making the city particularly vulnerable to rising ocean levels and strong storms.  Flooding, even today, represents a significant threat to private and public infrastructure and threatens the ability of the city to respond in emergency situations [1].  A recent study conducted for the City and released in June under the “Climate Ready Boston” initiative, highlights that under certain emissions scenarios, Boston could see sea levels rise an additional 8 inches by 2030, 1.5 feet by 2050 and 3.1 feet by 2070 [2].  Already, Boston has seen sea levels rise 10 inches since 1920, although half that is due to land subsidence [3]. 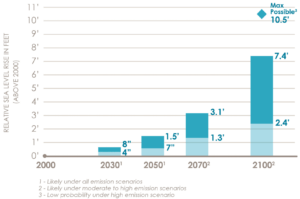 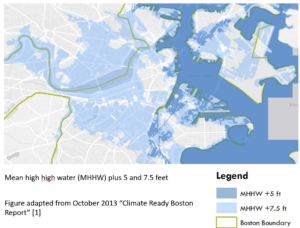 It is not only rising sea levels that pose a threat to the City and its citizens.  Rising temperatures are also expected to pose significant challenges, especially to the most vulnerable portion of the population, such as the elderly, poor and those with acute respiratory illnesses [2]. 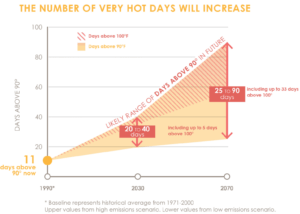 In 2007, responding to expected increases in sea levels, temperatures and other threats posed by climate change, Boston’s then mayor, Thomas Menino, issued an executive order that directed the city to reduce greenhouse gas emissions 25% by 2020 and 80% by 2050.  Recognizing our ever changing understanding of climate change, the executive order requires the city to update its plan every three years [4].  To help reach this goal, the city has [4]:

Results from this effort, while encouraging, leave the City with a significant challenge ahead of it.  From 2005 through 2013, Boston reduced greenhouse gas emissions by roughly 18%, although a majority of this reduction was the result of a “cleaner electric grid” [5].  This leaves the city with an additional 8% of reductions needed for the 2014-2020 timeframe, which will be more difficult to achieve [5].

Beyond reducing emissions, Boston has been taking steps to prepare the City in the near term by assessing vulnerabilities to municipal buildings, infrastructure and operational capabilities, assessing potential impacts to hazardous materials and sites, more closely working with insurance companies, and identifying opportunities to improve storm water management [5].  This is just a small sample of what the City is doing, but each plays an important part of making Boston more resilient to the effects of climate change. 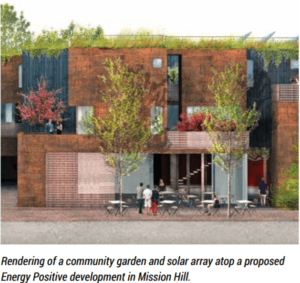 While all of these efforts are costly for the City and its taxpayers, there are a number of positive results that should materialize beyond the direct benefit of protecting public and private infrastructure.  Efforts to reduce energy consumption within the City government itself, by private citizens and via improved transportation infrastructure have the added benefit of lowering overall energy costs.  These savings, assuming energy costs per unit remain stable, should result in financial savings for the city and more spending power for its citizens [6].  A second benefit of reduced emissions and is cleaner air, which has its own health and related financial benefits for the City as a whole.

While the city of Boston should realize a number of benefits from its effort to address climate change, it can and should do more.  In tandem with its emissions reductions goals, the City should strongly encourage the development of green energy technology by the private sector within City limits.  This would likely lead the City to gain access to the newest and most efficient technologies and could help drive economic growth that would create additional tax revenue for the City and economic opportunities for its citizens.

Student comments on Boston Steps Up Fight Against Climate Change