“How about the Internet of Trees?”* Ben joked, as we meandered along a hike through Tomales Bay State Park, brainstorming names for the upcoming product release from Arable.

It wasn’t too far from the case.

Ben, a close friend from school, had stayed on campus after graduation to incubate a seedling technology aimed at putting big data in the hands of farmers. Four years later, he (CTO) and his faculty advisor Adam Wolf (CEO) incorporated Arable Labs around the idea that what farmers in the developing world needed today in the face of erratic weather patterns was real-time information about their crop pastures. Long past were the golden days of Monsanto and Big Ag’s focus on crop engineering and pesticide manipulation, which had seen plateauing improvements in recent years (1).

In summer 2016, they debuted PulsePod, a frisbee-like sensor that provides farmers with real-time measurement of crop science KPIs from crop growth and rainfall to even the color of berries on the bush at a comparatively meagre cost of $500 per unit. The venture community rallied around the launch, with VentureBeat, TechCrunch, and FastCompany features printed within the first week: “this Sensor Stick Fills a Knowledge Gap on the World’s Poorest Farms” (2, 3, 4). 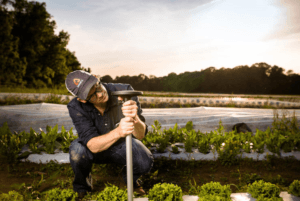 Since the advent of in-field sensing equipment and data-analysis, the most advanced farms have been able to track crops at all times, allowing scale agriculturalists in much of the US and Europe to achieve maximum potential yields while minimizing input and harvest waste (4). However, much of this technology was inaccessible to farms in the developing world as well as the 90% of U.S. farms that were considered small family farms and comprised 52% of all US farmland (5). This was in part due to the large upfront investment required for large weather stations and the complex backend integration and cumbersome UI that required a PhD-level agronomist to interpret. 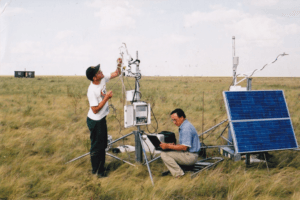 Wolf setting up a weather station.

To take the PulsePod from blueprint to prototype, Wolf reached out to Fred Bould, the creative mind behind the Nest thermostat, as well as Fitbit, GoPro and Roku. The result? A solar-powered compound monitoring device resembling a small drum that had ingested all the contents of a weather station. Think an iPhone 6 ingesting IBM’s 1953 ‘computing machine’ and you would not be far off.

All this was compounded with durability guarantees of at least 3 years in the same position in the field at a one-time cost of $500 per unit. Wolf understood that with deteriorating crop yields in increasingly erratic climate conditions, many farmers would be price-conscious consumers of AgTech.

But CEO Wolf argues Arable’s long-term value is not about the hardware as much as the software and data that emerges from implementation. Each Pulsepod is equipped with network capabilities to share data across other Pods, cellphones, and devices to allow streaming of real-time data from the field. Wolf’s ultimate goal is to “build an interactive intelligence bank covering agricultural conditions around the world. The big innovation, ultimately, isn’t the sensors. It’s the information the sensors provide.” (4)

Pilots, Partners, and Next Steps

With public awareness around climate change at deafening levels and businesses large and small facing impending decisions around how to adapt to both directional and erratic changes in global weather patterns, Arable faces many avenues of opportunity as well as challenges.

With a mere $1.5M in angel funding and $4M in non-dilutive grant funding from the NSF, Arable needs to capitalize quickly to run proof-of-concept pilots that highlight the impact of decision agriculture on crop yields as promised. Farming has a comparatively inflexible testing cycle with fixed planting windows and longer evaluation cycles to identify potential lifts in productivity, so strict POC timelines are imperative. In addition, as evident in the Indigo case, the emergence of climate change as a hot button issue has spurred a flourishing of AgTech businesses vying for the attention and pastures of farmers willing to try out new concepts from the lab. Amidst this race, Arable should scale quickly and test early to earn the buy-in from farmers for what seems to be a high-education tool.

Secondly, though Arable has announced partnerships with certain commercial farms including Francis Ford Coppola Winery and Driscoll’s, I would recommend they migrate to smaller and mid-sized farms without current access to advanced monitoring technology. Though attractive for branding, most large-scale US farms have significant (though much higher-cost and more remote) monitoring systems in place and yield uplift may be less significant upon initial deployment. If Arable’s mission is to bring the developing world from one-third maximum potential yield to three-thirds, they need to partner and pilot early with their target customer.  (784 words)

*A play on IoT, a stylized form of Internet of Things.

Should Tesla Buyers Receive Tax Subsidies from the Government?

4 thoughts on “Big Data, Small Farms, and Microclimates: Exploring The Internet of Trees with Arable”