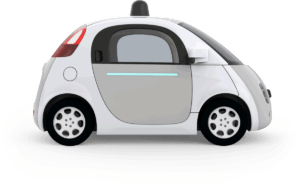 Well, judging by the look of that dinky thing, lots of stuff! But until they release the crazy Skynet prototype, we’re stuck with option A. 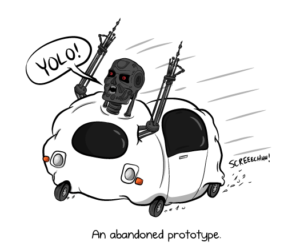 So, why are Google’s self-driving cars a good example of digital disruption? Great question! Since the days when Harvard was still a baby at only 133 y.o. (read:1769) and the first automobile was invented(1) people have been at the helm. But time are-a-changin’ and technology is allowing us to do things we previously didn’t think possible, like drive me from Logan Airport to Aldrich while I read my TOM case for the day.

So, is there a business to be had here? Duh! Intuitively most people understand there is value to eliminating driving. But I think the value and its second-order effects are underestimated. On average, every adult in the US spends ~1.5 hours a day(2) driving. Imagine the effects of freeing up that time for those people to do literally anything else. Even if only half of that free time is spend taking selfies on Snapchat, that’s a lot more free time people now have in their days which could actually move the needle on a macro productivity scale. As far as second order effects go, let’s just accept that people aren’t very good at driving. Humans just weren’t built to hurdle down a narrow road in a steel box blaring T-Swifts’ newest jam while remaining fully focused and this leads to 30,000 vehicular deaths each year in the US(3). Also consider that 45% of disabled Americans still work and presumably still need to commute(3). Not to mention the physical impact of cars which on average spend 95% of their lives parked(3). Also parking spaces in the US take up about 8,000 sq. miles(4), or about the size of New Jersey (yep, I just called NJ a parking lot). So, if autonomous cars could free up peoples’ time, alleviate accidents, allow the disabled to play a more active role in the economy and give us back New Jersey they would create an unbelievable amount of value for society and the businesses powering this change.

You had me at Snapchat! Now gimme my Google car?! While the benefits are abundantly clear, there are still a few hurdles in the way of autonomous cars – let’s look at a few.

Regulation. Regulation. Regulation. I said that three times because it’s kind of a big deal. I was at a tech talk at Google with the head of autonomous driving and the first question from the crowd was about why he chose a marshmallow-looking-thing that topped out at 25mph to test. His answer was one word: “regulations”. He explained that the regulations for a vehicle going under 25mph were about 5 pages while the rules for “real cars” to operate autonomously were closer to 5,000 than 5 pages. So to even test a prototype involved a huge amount of red tape. Even if these vehicles are prime time ready, they’re still not able to function fully autonomously in most states so to come to fruition the industry will have to heavily lobby for changes in regulations.

Safety and public perception will be another critical challenge. On the safety front, these cars are obviously going to have to be 100% reliable. That presents a host of challenges since even redundant hardware isn’t inherently 100% reliable. Another issues many people haven’t thought of is the network security of these cars. The cars will need to communicate with each other to travel efficiently on highways and they’ll likely need some linkage to the cloud. This presents a challenge because if someone were to maliciously hack this linkage at scale it opens the infrastructure up to a whole new kind of cyber-attack that could have very real consequences. In a similar vein to that is public perception. Beyond simply getting people to adopt autonomous cars, which isn’t trivial by any means there is a deeper moral issue to solve. If your car is careening towards a dozen pedestrians and will certainly kill all of them should it continue on its path or run off the road at the risk of your one life in order to minimize damage to human life? There are already articles about this topic(5) and no one has a good answer. In my opinion this is a debate that will rage which has the potential to derail the entire autonomous car movement.

In short, autonomous cars are a really interesting example of how digital technology could disrupt something almost as old as Harvard and create a totally new business model in the process. However, there are still massive hurdles we need to pass before this becomes a reality.

Will V-Commerce Replace E-Commerce at Wayfair?

Student comments on Autonomous Cars: Because Snapchating While Driving is a Millenial Must