What do you think of when you hear “American Apparel”? Made in USA? Provocative ads? An overly handsy CEO? Hipsters in crop tops? Deep, deep v-necks?

All these public conceptions have contributed to American Apparel’s recent bankruptcy, which ultimately was a direct reflection of the misalignment of its operating model with its business strategy. Founded in 1989, American Apparel is a vertically integrated apparel company that touts its Made in America production process and offers “clean” and “timeless” styles. This strategy worked for a while, but as of late has encountered severe problems.

Vertical integration: All of American Apparel’s products are designed, produced and distributed from three facilities located within a 30-mile radius of Los Angeles. The domestic production and highly centralized efforts allow for flexibility in responding to trends and rushing new products to stores quickly.

Made in the good ol’ US of A: American Apparel is deeply proud of its Made in America labeling. Their “sweatshop-free” approach to labor, while admirable, has made controlling labor costs very difficult, putting them at a significant cost disadvantage relative to their peers. A garment worker in California earns $1,440 a month, versus a garment worker in Bangladesh making $68 / month, $90 in Vietnam and $127 in Mexico. In 2009, American Apparel had to fire 1,800 skilled workers after an immigration inspection uncovered questionable employee documentation. As a result, the company had to scramble to replace these skilled workers with even more expensive workers, placing additional pressure on their Made in USA economic model.

optimization and production forecasting: Half of their store offerings are basics, which allows for less risk of obsolescence in terms of styles.  While highly beneficial for inventory management and demand forecasting, this means that their quick response times due to their domestic vertical integration are less of a competitive advantage for a meaningful portion of their business. The other half of their product offerings include more “trendy” wear, including new product lines like activewear and yoga pants.

Team-centric production process: The company uses team-based manufacturing in order to optimize productivity. Workers are divided into teams of 5-20. Sitting in a shared space with their sewing machines pushed together, they start with fabric that has been cut at another station. The first person sews the sleeves, passes it on to the next person, who attaches a zipper, and so on. The finished garment is inspected by a quality control worker and then boxed up and sent to the distribution warehouse next door.

The right operating model also takes into consideration the intangible assets of a company’s culture, values and management philosophy. While exuding a positive outward philosophy of social and environmental responsibility, under founder Dov Charney’s direction, the company had an unhealthy culture of loose corporate operations combined with extreme micromanagement from Dov, which has led to a sentiment of low employee empowerment and morale. On top of that, the sexual harassment suits against the CEO certainly have not helped. Dov was replaced in 2014 and a new CEO is currently responsible for the operational and cultural turnaround.

Value Proposition: American Apparel operates in a crowded marketplace, competing against the likes of Gap, Uniqlo and H&M.  It has tried to avoid competing on price by creating a unique brand image; its ad campaigns appeal to an individualistic sensibility by shunning a highly slick, corporate aesthetic and using “real” people with “naturally beautiful” looks as unconventional models. However, recent poor financial results from retailers across the industry suggest that the brand image of similarly youth-focused apparel companies might not be enough for young shoppers to consistently pay premium prices for these items. Sometimes, a t-shirt is just a t-shirt.

Target customer: The core customer is a 15-35 year old, fashion-oriented, middle-upper income lifestyle shopper, which has historically been a highly loyal customer (with close to 50% repurchase rate in 2013). American Apparel specifically targets a certain demographic who is inclined to shop at a secondhand store to create a vintage look (read: hipster). The clean design and unique look of its retail stores contribute to this individualistic vibe. However, customer loyalty has been declining in the last couple years as American Apparel has struggled with finding a business model that will allow it to sustain its position in the market. The company needs to re-assess if its message of patriotism and social responsibility is reaching and resonating with its young, cool consumers.

The bottom line is that style preferences and cost consciousness have shifted among its core customers, and American Apparel’s unique brand image may not be enough to maintain this customer base.

Several of these issues have been alluded to above, but the key areas of misalignment between the operating model and business model are: 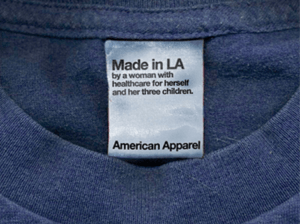 Is Made in America economically viable moving forward?:  The integral question is whether Made in America is sustainable.  Labor is the highest cost component in garment making, and as domestic labor costs continue to rise, this operating model becomes even more unsustainable. American Apparel can go one of two directions: go offshore or mechanize its production. It could still pursue its “sweatshop-free” approach, but abroad, by ensuring good working conditions in its overseas factories. But is it still American Apparel at its core if it’s not made in America? The other option is to mechanize: while human labor is inevitable in garment production, mechanized “sew-bots” could reduce the manual labor component. This could then increase the need for domestic workers with more advanced skills to program and maintain the machinery, which would allow American Apparel to continue sourcing labor domestically.

Does the core customer care about Made in America?: As the marketplace becomes more crowded, the integral part of the operating model – Made in America – may not be enough to resonate with its youth-oriented customer base. Additionally, the backlash against the provocative ad campaigns has turned off some of its core consumer base. The company needs to assess how to re-capture this base.

Are they primarily in basics or are they fast fashion? Balancing their SKU management of basic items and

constantly adding
new, fashionable items in response to new trends needs to be executed very thoughtfully. Getting into fast fashion puts them in direct competition with H&M and Forever 21, which have highly sophisticated demand forecasting and global distribution capabilities. American Apparel needs to assess where and how to use its vertical integration efficiencies to create a sustainable competitive advantage.

How to reconcile the brand image with the company culture? The socially conscious focus of its sweatshop free wages and small environmental footprint is not aligned with the provocative, controversial brand image it presents in its marketing efforts, which both do not match the disruptive and chaotic internal company culture. All three elements need to be reconciled for a cohesive branding and company strategy.

American Apparel’s recent Chapter 11 filing serves as a rude awakening for its management team. Rather than simply relying on its brand, American Apparel needs to carefully assess its core operating and business competencies and consider what will truly differentiate their product going forward.

H&M: How Fast Fashion Translates into Low Prices and Success