Amazon picked books as its first product category because it felt books were a particularly good fit for eCommerce at that stage in the industry’s development.  They were right—the low price point, large global demand, and advantage of a huge selection made Amazon’s book business a roaring success and within just a few years of starting, it was the largest book seller in the US.

Amazon leveraged its massive customer base to start moving into an even lower-cost book business starting in 2007 with the release of its Kindle e-reader.  eBooks could be shipped literally instantly to users upon purchase at practically zero marginal cost to Amazon, and with no waiting time for the consumer.

Though initially a high-growth category, eBook sales appear to have hit a plateau and by some estimates are declining. 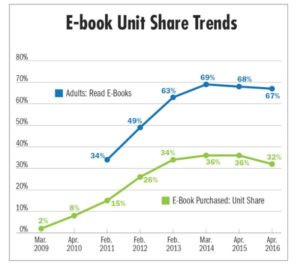 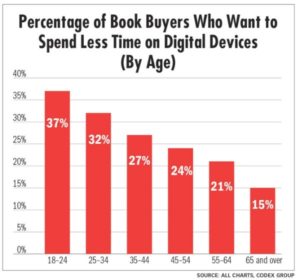 In light of this decline, Amazon has returned to bricks-and-mortar.  Having built a bookstore in Seattle with confirmed launches in Chicago, Boston, San Diego, and Portland, and likely hundreds more in the works, many are scratching their heads around what growth sees in the very model it’s been putting out of business for the last two decades.  The answer is that although it looks the same, Amazon’ physical retail model differs in key ways:

Amazon isn’t the first digitally-native business to go bricks-and-mortar (see Bonobos), but their move is certainly most ironic I’ve seen. It serves as a testament to the fact that as powerful, streamlined, and convenient as the digital space has become re: shopping, there are significant portions of the consumer populace (of every age) that want to handle physical items, as well as significant aspects of the consumer experience (such as trying on clothes) that simply can’t yet be replicated digitally.

Digitally native businesses should learn from Amazon—building brick-and-mortar stores doesn’t mean you’re necessarily signing up for all the disadvantages old brick-and-mortar businesses suffered.  Leveraging the data and logistics of a digitally native business model can make physical stores efficient and profitable in ways they haven’t been previously.