Can the Sports Shoe Industry Keep Pace?
The timeline of a sneaker, from the initial sketch, prototyping, testing, material ordering, production, and finally shipping takes 18 months [1]. 75% of sneakers, however, are on sale for less than a year [1]. A sold-out sneaker can take 2 to 3 months to be restocked, by which point demand may disappear [1]. Simply put, the sports shoe industry has not kept pace with fast fashion and changing consumer demand.
In addition, rising prosperity in Asia, where sneaker production has typically been outsourced, has resulted in higher labor costs. These factors demand a revolution in sneaker production and supply chain management. Adidas, like many other German manufacturers, has brought production back home as part of a wave of Industry 4.0, a push by German companies to remain innovative and competitive with automated “smart” factories and shortened supply chains [2].

The Race is On
Adidas is building two Speedfactories, one in Ansbach, Germany, and one in Atlanta, Georgia. Adidas’ Speedfactory is one of the new “smart factories” being built in Germany. The shoe design process is digital, with shoes styled on a computer and then tested for fit and performance. In parallel, another computer will test the production process to make it as efficient as possible. The factory will make the majority of the materials in house, using raw goods such as plastics and fibers. Once the design is complete, the machines will use computerized knitting, robotic cutting, additive manufacturing, and 3D printing to quickly assemble the shoes directly from the computer’s design. This minimizes the setup times and switching costs that typically come with producing multiple shoe designs, which can save hours, if not days, in labor time. The new production system will allow for speed and customization, with the design process taking 6 months, one third of the typical time, and production taking days with the hope of eventually reducing it to hours [3]. 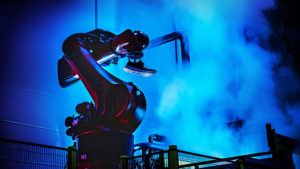 Because the Speedfactory creates the materials and controls the complete process, it will use data-driven production to “minimize waste, remove glue completely from the product, increase energy efficiency, and significantly reduce the carbon footprint of all product elements” [3]. The data and process can be visually shared with the consumer, increasing transparency and consumer involvement with the design and production.
The factory will not be fully automated, with certain precision jobs still being completed by humans. The Speedfactory will create 160 production jobs, versus the typical thousands in a factory in Asia [4]. Though current output per factory is small (500,000 shoes out 301MM sold in 2016), Adidas hopes that by bringing the shoe closer to consumers, it can increase speed of its supply chain and flexibility in production [5]. The factories can also produce batches as small as 500 shoes (versus the usual 50,000 – 100,000 pairs), enabling Adidas to better control its inventory and react to consumer demand [6]. If these factories are successful in Germany and America, Adidas will roll them out to more geographies [5].

In Practice
Using its German Speedfactory, Adidas is launching a limited line of 6 sneakers made for 6 cities (Paris, Los Angeles, Shanghai, Tokyo, London, and New York). Adidas traveled to these cities to collect data on the habits of local runners (running routine, sensors for their strides, gait analysis using motion capture) [7]. As a Speedfactory design, these shoes leverage data on fit, function, biometrics, personal preferences for materials and colors, and usage requirements based on geography and weather. Using simulations and computer testing, Adidas iterated and improved on previous designs based on user data. Accordingly, Adidas used the data to create small batches of city-specific shoes. The London shoe, for example, is more reflective and rugged, because Londoners love to run to work, often in the dark with lower visibility and in rainy conditions [7]. 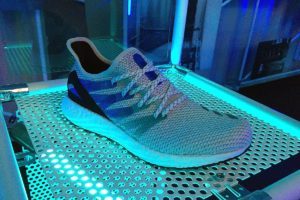 The Finish Line
While this new line is generating buzz, Adidas needs to determine whether its Speedfactories are actually scalable, the company’s timeline for expansion, and the changes required in its supply chain and delivery to match the factories’ new speed.
Adidas also needs to make sure it keeps pace with its top competitor, Nike, who is experimenting with computerized knitting to make high-tech fabrics like Flyknit and automated production that can assemble the upper part of a show 20x faster than a human employee [8].
As these sports companies race to automation, they need to remember and re-think the human component in forward-thinking design and technology changes. Will our future be fully automated?

Student comments on Adidas Speedfactory: Impossible is Nothing with Automation