Atop the entertainment food chain are consumers of content, fed by a myriad of distribution services that serve millions of songs, television shows, and movies. But beneath the distribution services, are creators: a community of artists who have collectively made a large enough library of desired content that businesses have judged it economically viable to create distribution platforms to serve global markets.

It is the democratization of the recording studio and technologies therein that have made this dynamic possible. After all, who cares about access to millions of songs if none of them are any good. In the last 5 years, technological advances have allowed novices to become near-professional sounding producers, removing the barriers to entry from a financial and talent perspective.

Avid’s Pro-Tools, the DAW of Choice 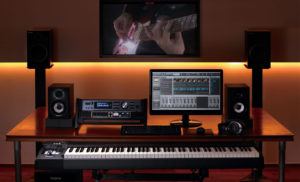 At the heart of any studio is a Digital Audio Workstation (DAW). It is what allows the CPU to intake an audio signal and process it as a digital file that can later be manipulated, much like photoshop. An early market entrant, Avid’s Pro-Tools has been an industry standard since penetrating the professional studio market in the 1990’s. Since all DAWs ‘sound the same’ as they are merely digital representations (0’s and 1’s) of audio, they must differentiate through functionality.

Capitalizing on the sharing economy, Avid’s newest iteration of Pro-Tools allows separate users to work in real time on a single file. It is important to note that real-time processing of audio takes immense computing power and the notion that a producer can record piano while a vocalist records to the same file simultaneously from her home studio across the world is truly remarkable [1]. 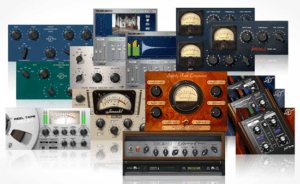 While the Avid’s DAW allows an audio signal to be transferred to a digital setting, plug-ins are what allows the digital signal to be further manipulated once “in the box.” How did T-Pain auto-tune his voice? How is dubstep made? Why don’t I remember being offered the Skrillex-womp-bass alongside the recorder in third grade? Plug-ins are add-ons a producer can purchase that expand the sonic possibilities once inside the DAW. Over the past decade, the majority of these plug-ins have been digital manifestations of real physical products. For example, to create a symphony, producers no longer need to hire musicians, rehearse, and rent studio space. Rather, they can simply open an orchestral plug-in and trial and error until they have achieved the desired combination of violins, flutes, and timpani. Recently, modeling and sampling advancements have not only improved the sound of digital instruments, but also unearthed new sonic possibilities. In this space particularly, Avid has fallen behind to third-party products who have begun experimenting with AR/VR manipulating instruments in an Oculus environment, akin to Google’s Tilt Brush [2] [3].

From an operating perspective, Avid has recently transferred to a subscription pricing method. As competitors’ products converge, subscriptions can be seen as an effort to lock consumers into an ecosystem, not only paying for the DAW, but the compatible plug-ins, much like the Apple App Store and Google Play.

To justify the subscription model, Avid will have to continually impress upon users its value and prominence in the market which will require further investments in R&D. Avid should continue focusing its efforts on amateur-grade products that bring users up the funnel to more professional-grade software. Through the creation of something like a “Pro-Tools Lite” that could be run on a smartphone or tablet, Avid could better acquaint users with its platform. Paraphrasing Alain Etchart, a prominent coder of VSTs (Virtual Studio Technology), DAWs and Plug-ins will get more powerful over time, but the ways in which we use things parallels their form. An iphone may not create the end product heard on the radio, but it may spur the demo that is then recorded in a professional DAW. [4]

Avid’s most profound impact on the business and operating model, however, is its macro effect on the music industry. In a world where the barriers to creating great music have been lowered, so too has the need for outside investment, hence the drastic increase in the amount of content available. Yet, since any artist can create music, record labels often require artists to build a semblance of their own following first, betting more on artist’s marketing savvy rather than raw undiscovered musical talent.

Today’s media landscape has been fragmented by the democratization of creation, furthered by the technological advancements of companies like Avid. By facilitating professional quality at little cost, Avid has removed key barriers to entry for amateurs, resulting in an incredible amount of quality music, laying the foundation for modern streaming services and upending decades-old consumption methods.

[1] Jaime Traba, “The Evolution of Avid’s Pro Tools and the Arrival of the Optional Subscription Model,” Explora, 2015, [https://www.bhphotovideo.com/explora/audio/buying-guide/evolution-avid%E2%80%99s-pro-tools-and-arrival-optional-subscription-model], accessed November 2016

Student comments on A Studio in Every Home: DAWs, Plug-ins and the democratization of the recording studio