A 6-pack of one of the world’s oldest and favorite beers, Guinness Stout, could soon cost more due to Brexit-driven trade complexities. On December 31, 1759, Arthur Guinness signed a 9000 year lease on a building in Dublin, Ireland that would become the home of one of the most recognized beers in the world. The beer from this brewery would go on to be exported around the world, and the brand would become an icon of its native country.1 Today, Guinness brewed in Ireland is shipped to many countries, including the rest of Europe and the United States.2 The owners of Guinness, London-based Diageo PLC, will need to find a solution to avoid or mitigate these increased costs or consumers around the world could see a rise in price at the store.

Trade Changes due to Brexit

When British citizens voted to leave the European Union, which includes Ireland, they also voted to make trade to and from the UK much more complex, potentially leading to these higher prices for end consumers. Pre-Brexit, there were open borders among the EU countries, meaning that countries could import and export goods across borders without needing to go through a time-consuming customs process or pay tariffs. Post-Brexit, the UK will need to develop new trade agreements with all EU countries, as well as countries outside of the EU.3 This is the first time in 43 years that the UK will have the ability to create its own trade agreements; it is also the first time in 43 years that customs delays and tariffs will change the way products are currently transported between the UK and EU countries. This change will likely lead to increased costs, longer lead times, and changes to supply chains that could ultimately pass additional costs to the consumer.4

Guinness is one of many globally-recognized products that will feel the constraints imposed by these changes in trade. The supply chain of the beer coming from this brewery was developed in a time of open borders and driven by spatial constraints in the city of Dublin. Today, the production of Guinness begins by bringing ingredients from all over Ireland to Dublin for brewing. Once brewed, the liquid is loaded into large tanker trucks, dubbed “silver bullets” and transported north to East Belfast, part of the UK, for packaging. Once packaged, the product is shipped back into Ireland to be loaded onto a boat and shipped to its end destination.5 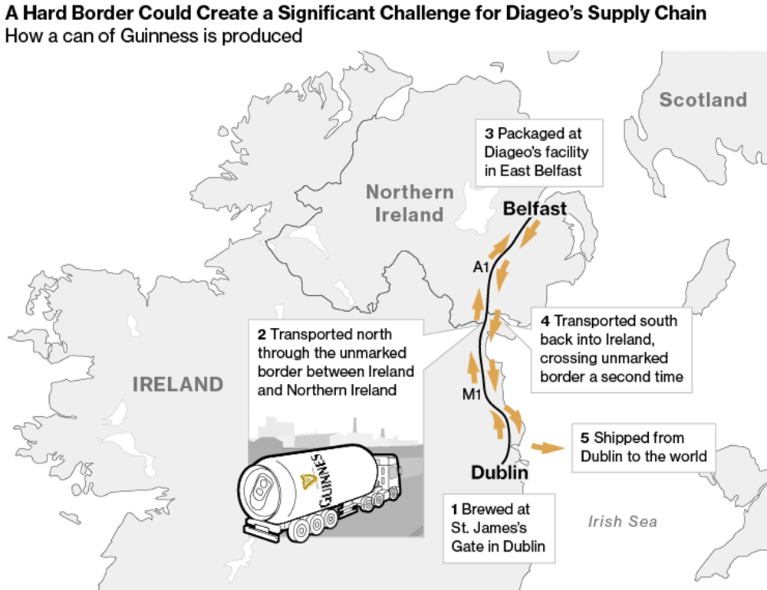 This process currently requires approximately 13,000 border crossings per year.  Even a short delay at the border for customs checks could lead to additional costs of €1.3M per year.6 Diageo uses another packaging site, Runcorn, which is in England, for some of its Guinness variants. This site could experience similar cost increases due to tariffs.7 Another well-known Diageo product, Bailey’s Irish cream, is also at risk. The ingredients for this product travel across the border three times before being blended and shipped around the world.6

Diageo is currently working with authorities in Britain and the EU to lobby for favorable trade terms.6 They have created a cross-functional steering group that is monitoring and reviewing ongoing risks of the UK exit from the EU. Thus far, Diageo does not believe that this change will affect the viability of the company as a whole, but has included this as a risk in their 2017 annual report. They have executives, including the CEO, working in market to mitigate locally.8 However, no publicly disclosed material action has been taken at this point.

As Brexit nears, and the date of official EU withdrawal approaches, Diageo will need to begin to act. Perhaps they will choose to move their packaging operations to Ireland, as moving the Guinness brewery is not an option. This change would be a significant investment, both in time and money, as other packaging sites would be closed, new sites opened, and all regulatory filings updated to reflect this. Diageo should continue to work with officials in the UK and around the world to understand risks of increased border security and mitigate as much as possible by lowering or eliminating border tariffs. There are several current trade agreements between the UK and non-EU countries that allow free or easy trade; it would be in Diageo’s best interest to work with the UK government to try to implement one of these types of trade agreements with Ireland.4

Considering the looming changes to the border between Ireland and the UK, should Diageo be taking a more proactive stance by moving packaging operations sooner? With the growing trend of isolationism and increasing border security and trade complexity around the world, should Diageo be moving away from their practices of cross-border supply chains and production?

Shrinking the Supply Chain: Target needs an integrated digitalization strategy to thrive as an omnichannel retailer

Student comments on A Pricier Pint: How Tighter Borders Could Increase Your Bar Tab