As I emerge from the basement of Aldrich, my cell phone finds service and chirps to life. Three new text messages (hi mom!), eight emails, multiple calendar reminders, a software update, two Slack notifications, my weight tracker telling me to weigh in, Mint tells me I’m spending too much, and a new podcast starts to download. I’m so distracted I almost run into someone as I walk.

Today, 92% of US adults own a mobile phone and 68% have a smartphone.[1] More than two-thirds of us live lives punctuated by notifications; a recent Nielsen analysis found that on average, U.S. smartphone users accessed 26.7 apps per month[2].

We have a hard time putting our phones down. According to the FCC, at any given moment across America, 660,000 drivers are using cell phones while driving[3]. And according to a recent Reuters survey, two thirds of the people said they sleep with their cell phones.

We’re always connected. And this has led to a strange, but perhaps inevitable oxymoron: apps promoting mindfulness.

Headspace, a guided meditation and mindfulness app, bills itself as a “gym membership for the mind.” Launched in 2010 by a Buddhist monk and his business partner, today Headspace has more than 5 million users in 190 countries[4].

Although mindfulness meditation has been around for millennia, it traditionally was a monastic practice[5]. Monks would spend hours in meditation every day. In the 1960s, meditation centers began opening in the United States. In the late 1970s, Jon Cabot-Zin began experimenting with mindfulness in a clinical setting and developed Mindfulness-Based Stress Reduction. Today, Headspace delivers guided meditations in just 10-minute increments for entry-level meditators. Despite the app’s soothing voice and pastel colors, Headspace is marketed as more science than spiritual[6]. The company has a Chief Medical Officer, takes on research partners and has completed clinical trials showing the effectiveness of Headspace as an intervention.

The secularization of meditation and decoupling from Buddhism is not without criticism – some have said this is commodifying Eastern traditions for Western consumption. Despite this, meditation continues to rise in popularity: Ray Dalio, of Bridgewater Associates, said, “Meditation more than anything in my life was the biggest ingredient for whatever success I’ve had.” Goldman Sachs bought bulk subscriptions to Headspace for their employees.

Although Headspace doesn’t release engagement data, after its unlimited free trial, the model is subscription based, suggesting users find value in continued use. This stands out in the app world: 26% of apps downloaded by consumers are never used a second time [7]. Headspace seems to have unusually strong loyalty among users with users attributing improved quality of life to the app, which has a 5-star rating. One recent user wrote, “I never write reviews but I’m compelled to write this one. I battle with anxiety and PTSD. I’ve been introduced to meditation in the past and found it slow and boring. I was never able to sit still long enough to keep up the practice. Recently my doctor suggested this app and from the first day I was hooked.[8]” 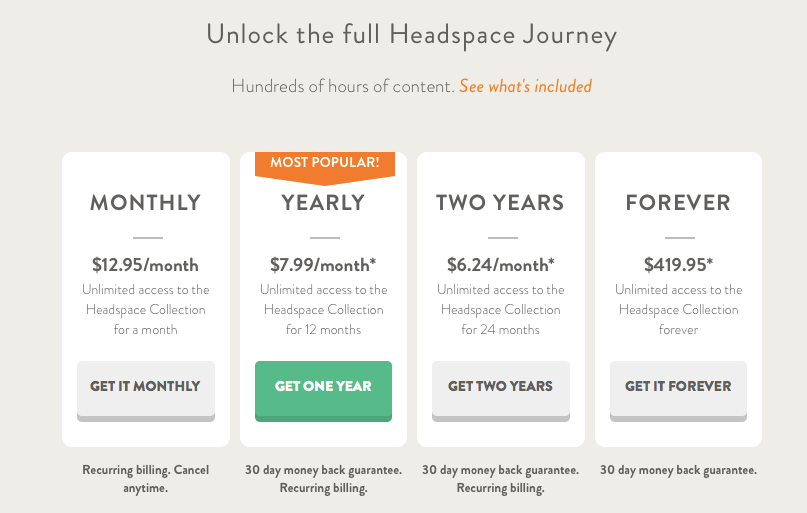 Looking ahead, the biggest risk to Headspace is whether mindfulness meditation is a trend that will go the way of Atkins and aromatherapy. The good news for Headspace is that unlike many health fads, the medical community is backing them[9].

There are opportunities to make the app stickier. The app already has the option of sending users mindfulness alerts throughout the day, but if integrated with wearable technology, this could be targeted and the app could ping users when heart rates rises above a certain threshold. And just as more insurance companies offer discounts to users who share health data from wearable devices, Headspace could partner with corporations and/or insurers who could provide coverage discounts to users who use Headspace on a regular basis.

In an ever-more distracted world, Headspace isn’t demanding clicks and eyeballs, instead they ask us to close our eyes and take a breath.

[3] The dangers of distracted driving. (2016, October 25). Retrieved November 18, 2016, from https://www.fcc.gov/consumers/guides/dangers-texting-while-driving

The IoT and Big Data Will Transform Royal Dutch Shell

Digitizing Indonesia, One Arisan at a Time

Student comments on A Monk in Your Pocket: The Digitization of Mindfulness