Woebot, founded in 2017 by a team of Stanford psychologists and AI experts, is a talk therapy chatbot helping its users monitor their mood and learn about themselves. Using a combination of natural language processing, carefully constructed writing, a sense of humor, and psychological expertise – primarily in Cognitive Behavioral Therapy (CBT), the bot asks its user how they are feeling and how things are going in life in brief daily 10 minute (max) conversations. It then stores all text and emojis and its questions and responses become more specific over time, referencing previous conversations. Like a secret but thoughtful friend and companion in your pocket. The bot addresses mental health and wellness by monitoring its user’s mood and need and curating videos and other helpful tools over the chat when relevant. 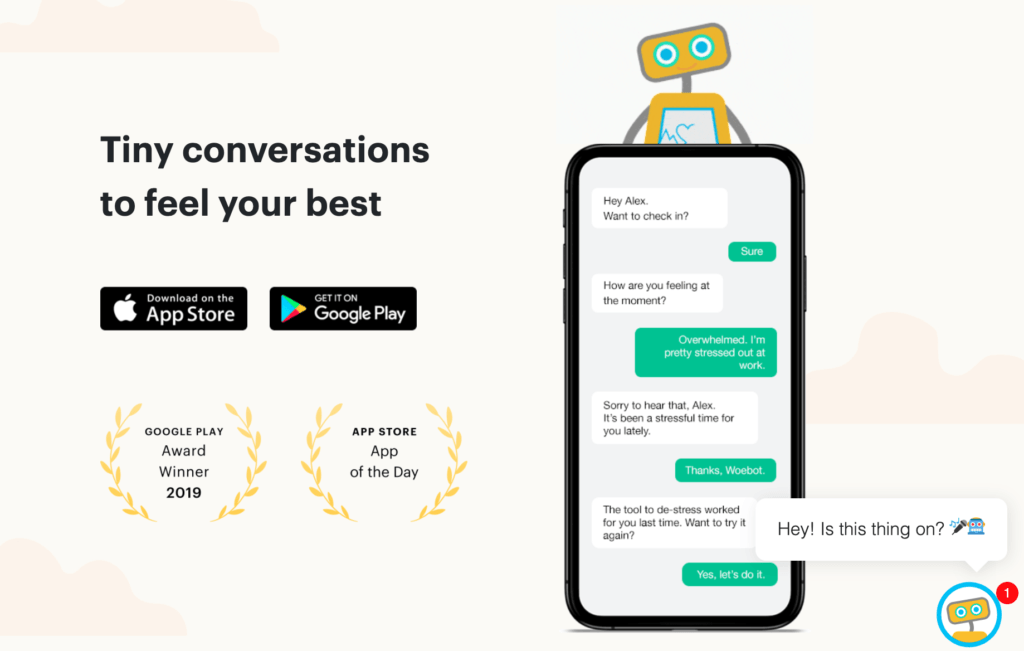 Woebot has since start been available for anyone curious to try it but is originally built, in English, to target young adults in college and graduate school. The service is (so far) free for users and offered both via iOS and Android apps as well as Facebook Messenger, effectively attracting its student target groups.

The chatbot is not trying to replace human therapists. However, more than half of the world’s population don’t have access to basic health care, even more without access to mental health care, and very few of those fortunate for whom therapy is an option. There is rigorous research to show that CBT delivered via the internet can be as effective as CBT delivered by human therapists for both anxiety and depression. Specifically, early results from research teams at Stanford University have shown that college students who chatted with Woebot significantly reduced the symptoms of depression in two weeks.

Users thus can improve their mental health significantly through Woebot with the following benefits: (1) the app is free (or, perhaps soon, with a small fee), (2) accessible with immediate access 24/7 in your home, (3) without the cumbersome barriers to taking the “first step” to seeking help, (4) without the fear of being judged by your venting partner, and lastly -although disturbingly still an issue- (6) without the potential stigma and judgment that comes with seeing a therapist. Woebot is thus an additional, more broadly accessible resource available for the many millions of people seeking help, and perhaps even for billions who would benefit from such support. Additionally, mental health professionals sadly are severely limited and Woebot helps people avoid the clinician’s office and free up critical resources for those requiring human intervention. 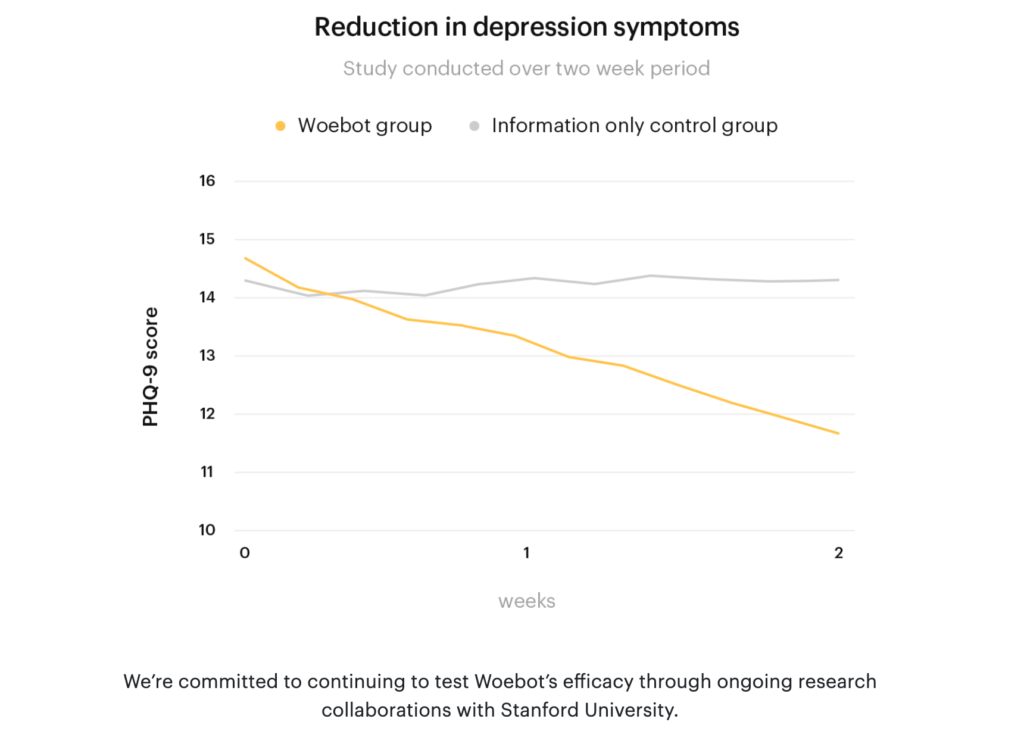 The obvious problem, however, is that Woebot isn’t making any money. Although stated in several news outlets that Woebot previously charged $39 / month after a two-week trial, Woebot is now free to download and use. It is thus currently operating on funding, which in its Series A funding round in 2018 amounted to $8 million. Their website nevertheless includes a disclaimer that the company may need to charge a fee in the future to achieve a sustainable business model. According to the chatbotmagazine.com, Woebot in early 2018 sent 2 million messages per week to users in 135 countries across the globe with an estimated few hundred thousand monthly active users. It seems reasonable to assume they have grown well beyond those number in 2020, but presumably waiting to charge until they have attracted a critical mass of customers loyal enough to pay a fee.

Woebot sounds wonderful – why isn’t everyone using it?

There are a few chatbots competing with Woebot internationally, but the major competitors to Woebot are also potential complements in other mental health categories, such as meditation apps (e.g. Headspace) and mood-tracking apps (e.g. Optimism), as well as human in-person therapists and the quickly growing field of online human therapy over video-chats. The competitive (and complementary) landscape thus includes alternatives ranging from free to expensive, low-intensity to high-intensity, and quick to time-consuming.

Despite Woebot’s many benefits and scientifically proven effectiveness, the major hinder to reaching a critical loyal mass is most likely a general misconception that chatbots and emotions do not go hand in hand, leading people to dismiss the app before trying it. In fact, most people’s experiences with chatbots -if existing at all- are dominated by misunderstandings and frustration with unresponsive and impractical customer service chatbots. It sure then seems silly to pour your heart out to a machine, expecting it to help you, at which point the alternative and more established mental health or wellness apps or meetings seem more approachable.

Yet we know that studies find that a large majority of those who try Woebot find it surprisingly helpful, suggesting it is possible to convert users to register to the free app easily, which will also lead to greater data collection to further improve their conversion ratio, app, and business model. The true challenge seems to lie in convincing users to first try the app, and do so resource-efficiently before the app bleeds too much money.

Hmm… How is Woebot going to overcome such perception, win over competitors, and make money?

First, to find potential “tryers” of the app, Woebot could target even younger individuals – those who are more open to exploration and used to chatbots, and importantly likely to trust such technology and service. Second, to reach a critical mass quickly, they should target itself to school institutions (from any age, really) – essentially adding a B2B component. Third, while offered for free initially, a successful outcome from students “befriending” Woebot could potentially lead to paid contracts and earn the company a stable revenue source.

The app certainly is relevant among adolescents and children where mental health disorders -particularly anxiety and depression- are increasing at a disturbing rate, putting immense pressure on already constrained health resources in schools and youth services. Without interception, conditions take a formative role in early years, leading to extremely high costs to society that could potentially have been avoided. Treatment and prevention are desperately needed.

Mental health services and academic support would benefit from referring its students to Woebot, which can relieve pressure from school resources. Ideally, schools at large would refer students to Woebot for preventative use. Woebot must stress its credible Stanford team and scientific evidence of the app’s effectiveness to get a foot in the door for a free trial period (or similar). Presuming it lives up to the results it claims, a contract may be granted. Schools, children, and parents speak to each other, giving Woebot an opportunity to become the go-to school app.

The beauty here is that the schools present the students -likely the most receptive age group- with the app, explain its use, vouch for its effectiveness, in an environment susceptive to word-of-mouth spread, essentially doing a resource-intensive job for Woebot. Woebot will get “tryers”, gather data, learn to convert likely similarly-minded groups, and most importantly catch users at an early age that other mental health apps mostly do not prioritize. If successful and made “sticky”, Woebot could potentially build loyalty to the extent where they become the preferred choice of help and check-ins going forward – like a friend joining on a life path (that users will be willing to pay for beyond school).

Of course, such partnerships are highly relevant also in Colleges and Graduate Schools, particularly in future years. With solid research evidence, Woebot should approach the government to subsidize schools for contracts, with the argument that Woebot will decrease later costs in society. In both instances, competition will be significantly harder, hence the benefit of catching users at an earlier age.

Later, Woebot could potentially approach employers directly or ideally insurance companies for easy, broad, and secure access to a range of institutions and organizations. Some more relevant than others, and once again here with much larger competition before the early “tryers” have reached adulthood. But a possibility nevertheless. When translation to other languages is possible and resources are available, the world is the limit.

Woebot offers a free (or low-cost), unlimited, and mentally and physically accessible solution to complement and/or replace (at times) an extremely limited and inaccessible, yet desperately needed, resource. With the same effectiveness. Relevant to hundreds of millions (+) of people globally. Yet introducing emotions with AI is ahead of its time and bleeding money. There are, of course, many challenges and many opportunities, but I believe getting a critical mass of young “tryers” with paying institutions is one promising solution to move forward. (Of course, assuming further research continues to support Woebot’s claims of effectiveness, and that users continue to find liking to the app for an early conversion rate).

Brewing with a dash of Data and Analytics – Starbucks