Wikipedia is the largest and most popular online encyclopedia and ranked among the five most popular websites. It was launched in 2001, is owned by the nonprofit Wikimedia Foundation, consists of 40m articles in more than 250 different languages (its English-language version consists of 5m articles), and has 18bn page views and nearly 500m unique visitors each month. Although originally the founders intended to make Wikipedia a business for profit, they later decided explicitly to make all content free to access and free of advertisements, funding operations instead through donations from appreciative users. Pleas for donations often appear at the top of articles. In a recent appeal, Wikipedia’s founder Jimmy Wales wrote: “People say we live in a media environment where facts have become subjective. At Wikipedia, we reject that idea. We believe facts matter. Please help us keep Wikipedia online and growing. Thank you.”

According to the Washington Post, the amount of money required to keep Wikipedia running is only about $3m (compared to the $2bn advertising budget of Google). “People will come up to me during fundraising season and ask if Wikipedia’s in trouble,” said Andrew Lih, associate professor of journalism at American University. “I have to reassure them that not only is Wikipedia not in trouble, but that it’s making more money than ever before and is at no risk of going away.” 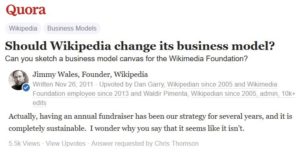 The Wikimedia Foundation, which is an increasingly distinct entity from Wikipedia, controls the Wikipedia trademark and receives its donations/grants; there is no way to give money to Wikipedia itself. Although inexpensive and well-loved Wikipedia has enough money to stay online and permit editors to continue building it, there are concerns around social dynamics and collaborative practices. The Wikimedia Foundation has an annual budget that has ballooned from $10m in 2010 to about $80m in 2016 (with expenses of $66m). The volunteers, who build the site and others who care about it, are increasingly skeptical about the choices the Wikimedia Foundation has made in increasing its budget, and in how it chooses to spend the money.

If Wikipedia were to implement the monetization techniques such as the creation of a premium membership or display banner ads, lead generation forms and affiliate links on article pages directing to third-party merchant sites, the site could be generating monthly revenue of more than $239m, according to monetizepros.com. However, since 2002, when a large group of Wikipedians staged a “Spanish revolt” and left the site for Enciclopedia Libre, the site’s minders have become hyper-sensitive about alienating their amorphous community, which would point out that thousands of Wikipedia “volunteers” essentially work on the site full-time, driving its success.

Wikipedia editors, many of whom are unpaid and live across the globe, take it upon themselves to manage every word, link and image. The English-language version has close to 30m registered and 140k active editors (while the entire staff of Wikimedia is only 280 employees). Anyone with internet access can add, delete or modify anything on Wikipedia; some pages require users to create an account, others don’t. An article is not considered to be owned by its creator and is not vetted by any recognized authority. Updating and managing content as well as fact checking and sourcing can be rewarding for editors who want to collaborate on a global project. “There is a sense of shared responsibility to maintain this vast resource,” according to a Wikipedia spokeswoman. People contribute because they look at the big picture vision and think Wikipedia is a worthwhile project – people want it to exist in the world and enjoy helping to make it happen. While people don’t like working for free, they do things for free they find entertaining (e.g. intellectually entertaining, a feeling of warmth towards the community, hanging out with friends).

Wales talked in an interview about the business side of his non-profit organization, how the idea evolved, and how he got people to contribute to it: He was inspired by the open source movement, saw how communities of programmers were coming together online to create software, and realized that there was a new model for collaboration going on online. He had no business plan, but saw an opportunity to meet customer needs in an innovative way. He first launched Nupedia, also a free encyclopedia written by volunteer scholars (thus a similar vision as Wikipedia), but didn’t understand the social model needed to create Wikipedia.  Instead, Nupedia had a top down system, which was slow and not much fun (it consisted of a seven stage review process, where people had to submit their proposals for what they were going to write). But Wales was very passionate about the idea to create a free encyclopedia for everybody — as a humanitarian goal and as a concept of the purpose of what the internet is for. He decided to just start over and go in a much simpler and less rigid way. Wikipedia benefited from early contributors from Nupedia, Slashdot postings, and web search engine indexing, which drove traffic to the site and got people excited and interested in the concept.  It took about nine months before mainstream newspapers took note.

The open-source encyclopedia’s reliability and neutrality has sometimes been questioned, and there are cases of pedantry, sexism and edit wars. In response, Wikipedia has developed ways to settle disputes over entries and to flag information that needs further verification. Examples are the Arbitration Committee and STiki, an intelligent routing tool that directs trusted human users to potential vandalism for definitive classification. Under the “pending changes” system, new and unregistered users’ edits to certain controversial or vandalism-prone articles are reviewed by established users before they are published. The “History” page of each article links to each revision; the low transaction costs of participating in a wiki and allowing easy access to past versions of a page favor “creative construction” over “creative destruction”. The site also insists that every fact must be backed up by a reliable source. When people seek to change a controversial article, they usually have to provide a persuasive argument and extensive citations to make their edits stick.

Furthermore, Wikipedia has an extensive manual instructing contributors how to behave. Already in its first few months, Wikipedia’s policy of “neutral point-of-view” was codified, and one of the key guidelines is to “assume good faith.”  Contributors avoid a tragedy of the commons by identifying with and gaining status in the Wikipedia community. Editors in good standing in the community can run for one of many levels of volunteer stewardship: this begins with “administrator”, privileged users who can delete pages, prevent articles from being changed and certain persons from editing. Each article and user has an associated “Talk” page, the primary communication channel for editors to discuss, coordinate and debate. Most content is created by “outsiders”, while most editing and formatting is done by “insiders”. Wikipedia’s community has been described as cult-like, including in-jokes, insider references and specific technological codes. Wikipedians sometimes award one another virtual barnstars (personalized tokens of appreciation) for good work.

Wikipedia’s efforts show positive results: Most edits are constructive, and vandalism occurs in only 7 percent of them. The Washington Post argues that the site has managed to carve out a space on the internet where people can have mostly sane and productive conversations that mostly converge to a version of the truth. Research from Harvard Business School suggests that Wikipedia has become increasingly balanced. An analysis of political articles shows that the site was once heavily biased toward the left, but has steadily drifted toward the center, to the point that many entries are now about as neutral as their counterparts in the Encyclopedia Britannica. Furthermore, Wikipedia seems to exert a moderating influence on its contributors. It appears that working on Wikipedia might de-radicalize people; their contributions contain fewer ideologically-charged statements.

MShop: what if we crowdsourced mystery shopping?

Student comments on Wikipedia – How to Incentivize and Manage Crowd Participation