Teachers who have walked the halls of large urban, under-resourced school districts can’t help but roll their eyes at the next sexy technology product that claims it will revolutionize learning. Educators have been hearing that refrain for decades. However, it’s worth asking – is now different? Will Moore’s Law take us leaps and bounds forward in the coming years (potentially making real education innovation possible)? A community of well-respected scientists seem to think so.[1]

In the face of this type of hyper advancement, I believe education will be forced to evolve in dramatic ways. Virtual reality is one of a few technologies that holds immense promise in education. The value creation story is incredibly exciting, but the value capture piece gives a lot of people pause. I will look at value creation and capture in the context of education and will highlight one company in particular, Blippar, that I think is taking a promising approach to overcoming the value capture hurdles.

The VR/AR note outlines a few use cases, but to elaborate further…

Value capture in the education sector has proved difficult. Many traditional VC’s have sworn off investing in any company that sells into K-12  because budgets are tight, sales cycles are notoriously long, and purchases are subject to unpredictable political whims.[5]

Firstly, school leaders need to justify their purchases to the school board, the community, and other political figures. Expensive HMD’s are not currently at a price point that district leaders can justify. It’s unlikely that high quality VR will be feasible in the education sector until the cost structure of devices and content change. Secondly, many VR companies are simply too far ahead of the market right now. There is a push effect from companies rather than a pull effect from schools (re: the KT case). And there is a chicken or egg component – schools won’t see the value of the product until they can test out use cases, but companies may not invest in expensive MVP’s if they don’t think there’s a true need from schools. Lastly, as discussed by Ron Adner in The Wide Lens, there is major co-innovation risk with VR in education. Effective application in classrooms requires a whole host of stakeholders to be aligned:

It’s unclear to me whether all these parties will move forward at the same pace, making it extra hard for any discrete product/service provider to capture value.

So, what can education companies do in the face of these obstacles? A UK based AR company called Blippar seems to be charting an interesting path forward. Blippar’s core technology “analyzes an object’s characteristics and suggest what that it might be — based on its previous performance of recognizing similar objects — and then offer(s) additional useful information about it from the web.”[7] The app essentially allows people to “unlock” learning anytime, anywhere. 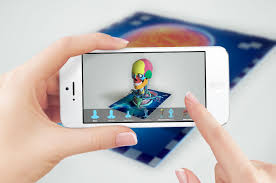 Blippar has been able to leverage its core assets across various verticals. The products work in advertising, in enterprise contexts, and in the creative world (in addition to education). The revenue from other sectors may be able to cross-subsidize the education vertical while classrooms and schools “catch up.” Additionally, Blippar’s solutions can be used on existing, cost-effective mobile devices. While the experience may not be as powerful as when using an Oculus rift headset, this aspect makes Blippar immediately more accessible for school districts.

If Blippar can use this many-sector approach and its low-cost device strategy to establish themselves as a trusted VR/AR brand in the classroom, they may have the opportunity to become the education ecosystem for VR/AR content. The first mover advantages of trust/existing relationships in an education context cannot be underestimated and may help Blippar capture value away from device makers who I believe are currently in the best position to capture the most value in the market.