Two months ago my parents discontinued our landline telephone service. For the past four years it served mostly to receive random advertising phone calls. They also switched their cell phone family plan to unlimited data. We all travel lots and increasingly call and text using online free applications. Looking how our family’s communication has changed over the past decade, made me think how software providers fostered the disruption of the telecommunication sector. And Viber, a free online call and text app acquired in 2014 by Japanese Rakuten for $900 million, is a particularly interesting example. Here is why it succeeded. 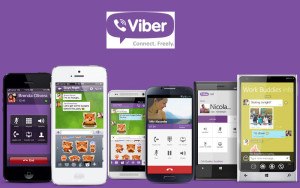 First, Viber entered the market more as a direct competition to cell phone sms/call functionalities than Skype per se. Started by Israeli and Belarusian founders, Viber was launched in 2010, initially combining the functionality of calling provided by Skype (without video) with ability to share messages, images and locations that Whatsapp gave. Once installed on a device, Viber would search through the contact list and automatically identify which users already had the app. No login or password needed.

The choice to exclude video calls was an interesting one. By not providing video, Viber replicated basic functionalities of a cell phone, the only difference was that they were free. This feature was crucial not only for cross-border communication but also for friends and families living in the same country, who already had wifi at home and at work. Why pay for additional minutes and messages when you can call someone for free? Soon after launch Viber would become viral. I got the app after a college friend of mine suggested we chat this way. Shortly after, I convinced my mom, my dad and my sister to do the same.

Second, Viber came in the right time and was developed for a right device. Mobile penetration was growing, so was internet access with deployment of 4G and LTE transmission. Many, especially in developing world had greater access to cell phones and in some countries would use them more than PCs. Viber has been particularly successful in emerging markets, where telecommunication services can be quite expensive. While Skype struggled with making its platform mobile compatible, Viber’s VoIP would work better, in particular when internet connection wasn’t great. And in the developing world most users could not afford an iphone with imessage and facetime capabilities.

Third, Viber quickly moved to build a platform with a hope to become a communication tool of choice. After polishing its calling and messaging service, it extended to tablets and PCs, coming in a more direct competition with Skype. In 2013 Viber Out was launched, which allows users to call landlines and cellphone numbers starting at $1.3 cents per minute.

Finally, Viber focused on differentiation. In 2013 Viber introduced the sticker store, where users can buy themed emot icons from Minions to Frozen for an average price of $1.99 for a set. More recently users can design stickers and submit them to Viber. Stickers proved very successful in particular with younger audience that tends to text more. Not convinced? See this video:

Recently Viber added games to its store, allowing users can play with each other. And although the company was operating at a loss of around $30 million in 2013 according to pre-acquisition financial statements, user base more than doubled to 606 million, from 280 million in February 2014 (no post-acquisition financial statements are available).
What does the rise of Viber mean for the telecom world? In Saudi Arabia and Iran the governments blocked Viber to protect revenues of telecom companies. Yet in the long run, traditional cell-phone carriers will need to find a way to generate revenue beyond data plans. Orange has already launched a messaging and VoIP system called Libon, compatible with Android and IOS devices. Meanwhile, hardware providers are working on even better hardware-specific communication systems, while software providers, like Viber, will compete to deliver platforms that can work with all. One thing is clear, no one will need more landlines. At least for now.