The Walt Disney company is one of the most successful entertainment companies in the world, if not the most. From its Star Wars adventurers, to its Marvel super heroes to its suite of animated characters, it has compiled an intellectual property library that is second to none. To maximize the value of those fan favorites, the company has perfected its ability to leverage that engaging IP to generate new revenue streams, including through its worldwide network of parks and resort, the licensing of right for consumer products and the creation of interactive entertainment, like video games and VR experiences.

Until recently, Disney operated with four primary divisions: media networks, parks and resorts, studio entertainment, and consumer products and interactive media. All four of those divisions were focused on creating highly engaging and entertaining media content that could be leveraged by the other divisions. Toy Story 3, a film from the studio entertainment division that generated over $1 billion in the global box office, generated $2.8 billion in merchandise sales for the consumer products and interactive media division. The Pirates of the Caribbean franchise, which originated as a parks and resorts ride, has sold over $4.5 billion in global ticket sales across five movies for the studio entertainment division. Many of the most popular rides at Disney’s parks are derivatives of the company’s films and some of the most beloved TV shows on Disney’s children’s cable channel came from the company’s classic animated features.

Of those four divisions, media networks was the largest revenue generator in FY2017 with $23.51 of Disney’s $55.14 for the year. Within the division the two primary areas of operation are the studio, which creates TV programs, and the network, which compiles TV programs and sells that programming to distributors of networks, known as Multichannel Video Programming Distributors (MVPDs). The network is able to generate revenue through two primary channels: ad sales and affiliate sales. Ad sales come from selling ad time to brands that want to reach the channel’s viewers. The revenue generated from ad sales is a function of the price you charge per impression (a viewer that sees the ad) and the number of impressions you are able to generate. Affiliate fees are the fees networks charge MVPDs (aka cable providers) to distribute their channels to cable customers. The total amount the network receives is a function of the fee and the number of subscribers that sign up for the channel. Historically, Disney has dominated this business model. ESPN, the crown jewel of the media networks division has been able to charge affiliate fees over $7.00, the highest for any cable network. The second highest is less than $2. 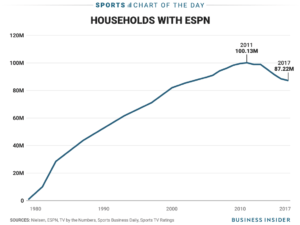 The problem for media networks though is that this model is reliant on the continued prosperity of linear TV and linear TV is suffering at the hands of “cord-cutters” and “cord-nevers”. Both ad fees and affiliate fees require viewers to continue to sign up for cable subscription and the rise of the internet has reduced the need for cable. What started as easy to make and distribute user-generated content through websites like YouTube and Facebook has evolved into professionally created video content that has been able to disintermediate major networks and MVPDs to reach viewers. Netflix has a global subscriber base of 125 million viewers that pay less than $15 a month (compared to an average cable subscription price that is multiples of that) and has never had to form a meaningful relationship with and MVPD. Amazon became one the biggest players in the space when it paid $250 million just for the rights to develop a new Lord of the Rings Series while never facing the challenges that an incumbent network or studio faces. Although the economics of these Netflix and Amazon Prime Video are being questioned, they are still managing to challenge Disney in the fundamental component of its business, which is its ability to attract viewers. Netflix has done it already by attracting millions of viewers, many of whom now forgo a monthly cable fee. Amazon will be able to do so in the future by offering immersive content to viewers in a format that is much more appealing than being forced to sit in front of a TV, at a set time and having to watch ads. With Amazon Prime Video, viewers will have the ability to watch what they want to watch, when they want to watch it, in the place of their choosing and often at a significantly lower price point.

Beyond the benefits of disintermediation, these services are also able to enjoy the benefit of creating a direct relationship with viewers. The most significant impact of this is that the service can gather data on viewing habits and use those insights to improve the recommendation process and to inform the content creation process. This means that as providers like Hulu and Netflix continue to grow, they will be able to create more appealing content and make it easier for their subscribers to find that content. Although this new digital distribution channel is not nearly as profitable as Disney’s legacy TV channel, it is vital that Disney begin to pivot. With the internet reducing the barriers to entry in providing video content to audiences, both the quantity and variety of what is available is expanding rapidly. The House of Mouse will need to establish sooner rather than later to insure the market isn’t too saturated once it enters. It will need to begin gathering data and to convince consumer that it can deliver not only content, but an experience, that is worth signing up for.

Luckily for Disney, it has already taken steps in that direction. Last year, it completed its purchase of BAMTech, paying $1.58 billion to increase its ownership from 33% to 75%. BAMTech was previously an MLB subsidiary and gives Disney the ability to stream both live sports and pre-recorded 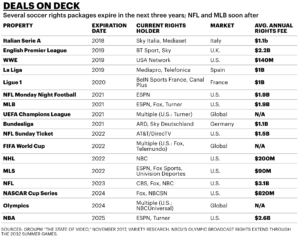 content to viewers on a variety of devices. Disney has also announced that it will be pulling its films from Netflix and will be launching its own direct-to-consumer (DTC) subscription video on demand (SVOD) services over the coming years. The first of which, ESPN+, launched earlier this month. The shortcoming of ESPN+ though is that it does not include many of the features that makes ESPN a must-have channel. It doesn’t include the majority of the live sports that ESPN pays billions for or SportsCenter, ESPN preeminent TV show. It does include some its popular programming, like its 30 for 30 documentaries, but is largely described as a supplement to the cable channel as opposed to a replacement. Going forward, Disney will need to grow more comfortable cannibalizing itself. As Tim Cook said, “I’d rather Apple cannibalize Apple than somebody else cannibalize Apple.”

The first step in doing that is creating a division whose key performance indicators aren’t too closely tied to the legacy business. Fortunately, Disney did just that earlier this year when it launched a new direct to consumer division. However, this new unit still seems to be reluctant to encourage viewers to transition from linear to digital viewing, as seen by the limited offering in ESPN+. Additionally, Disney will need to significantly expand its library. The company has become known for creating a relatively limited catalog of high quality content, allowing it to make more per film and to dominate the box office. Going forward the company will need to become comfortable creating enough content to keep viewers interested on a monthly basis and potentially slightly lowering its standards to do so. Disney’s acquisition of FOX provides a meaningful step towards that library expansion but company will need to continue to leverage its existing IP to create content that fans will want to binge. I believe Disney absolutely has the ability to succeed in this new marketplace but needs to be willing to aggressively transition away from its heritage business models to be successful on digital screens.