Despite incumbents like YouTube, Netflix, and Prime Video, Twitch has stealthily grown into a streaming juggernaut… although it helps to have Amazon as your parent company, who bought the startup in 2014 for $970 million [1].

Twitch is an online streaming platform that allows video game enthusiasts to watch and interact with a community of 2.2 million streaming gamer-creators.  In January 2018, more than 100 million people tuned in to Twitch, and their average viewership (962,000) was on par with CNN (783,000) and MSNBC (885,000) [2].  Twitch has achieved this viewership by creating the preeminent social experience for the video game community, and by sharing the value Twitch’s platform creates with its partners and customers.

Fighting Multi-Homing through Network Effects.  Free online streaming will always be susceptible to multi-homing, since switching costs are as cheap as a few clicks or an app download. While Twitch can’t stop customers from multi-homing on other free online streaming platforms, Twitch has been able to build network effects by focusing on niche content (video games).  A breadth of video game content was already available on YouTube, but Twitch realized gamers are very social, and thus focused on creating an immersive, live streaming experience.  Over time, Twitch refined its interface so it specifically appealed to gamers, including live chat, channels organized by game, and the ability to see live viewership stats so gamers can tune in to the hottest streams.  Twitch also is agnostic to content, allowing streams of the latest, most popular games, as well as nostalgic relics from the days of NES and Playstation.

Sharing Value with its Partners and Customers.  Realizing that the value and defensibility of its community depends on content creators, Twitch has tried to share value with its broadcasters. Broadcasters who meet a certain viewership threshold earn a share of ad revenues from the broadcast [3]. Broadcasters also can enable channel subscriptions, which if purchased by viewers grant those viewers special perks like subscriber-only chat, custom emoticons, and ad-free viewing.  Twitch also partners with game developers to provide subscription fans with custom characters, vehicles and skins for their favorite video games, and Twitch recently announced that it will enable fans to purchase games on Twitch, gaining a commission from game developers and sharing that commission with the broadcaster who linked the sale [4].

Blizzard Overwatch League.  Now, Twitch is making its biggest bet yet on the future of esports.  In January 2018, Twitch announced a two-year deal for the rights to stream Blizzard’s Overwatch League, at a reported price tag of $90 million [5].  Overwatch League is an attempt to professionalize esports, and some big names have already purchased Overwatch League teams for reportedly $20 million, including Robert Kraft (Owner, New England Patriots) and Jeff Wilpon (COO, New York Mets) [6].  Similar to professional sports like the NFL and MLB, Overwatch League has sought to create geographic rivalries, with teams like “Boston Uprising” and “Dallas Fuel,” but also has international teams like “Seoul Dynasty” [7].

Will the Superbowl of the future be played on a virtual battlefield?  Nobody knows for sure, but there’s a good chance you’ll see it play out on Twitch in years to come… 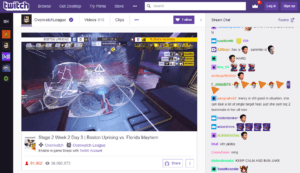 [2] “Amazon’s streaming service Twitch is pulling in as many viewers as CNN and MSNBC,” Business Insider (Feb. 13, 2018), http://www.businessinsider.com/twitch-is-bigger-than-cnn-msnbc-2018-2

The League: Challenges of Scaling an Exclusive App

Grindr: Unique Positioning in the World of Geosocial Networking

Student comments on Twitch: the ESPN of Esports