Have you ever had a really bad experience with an airline?An overbooked flight. Hours waiting on the runway. A last minute cancellation for entirely predictable weather. Wifi promised, but hardly delivered. Some airlines have a special talent for ripping us off.

As you walk away from your airline disaster, you often ask yourself: what now? Where do you channel your rage? How do you help fellow travelers from falling victim to the same airline shenanigans? How can you get a little vengeance? And last, how do you avoid these pitfalls in the future?

You can complain to customer service, but that won’t do much good. Chances are, you and everyone else will just keep flying the same airlines anyway. This is just the cost of traveling, right?

I wager it doesn’t have to be this way. If everything from Amazon products to restaurants to Uber drivers can have customer reviews, why not airlines? In fact, recently TripAdvisor tested this idea. Nine months ago they introduced FlyScore, an airline scoring system based on customer reviews meant to “demystify the flight shopping experience” [TripAdvisor].

FlyScore is an innovation unique to TripAdvisor. None of the major flight purchasing sites offer airline reviews (as best as I’ve seen), or an airline ranking. If fact, flyers who want to know how airlines stack up have pretty limited options. The US Department of Transportation produces reports each month thick with numbers, but light on insights. Flyers can go to forums like FlyerTalk.com to complain to fellow passengers, but its unclear how many folks are actually reading.

Unlike any of these other options, FlyScore embeds passengers reviews directly in each flight a buyer considers purchasing. See the example below of a return trip from Boston to Bogota. 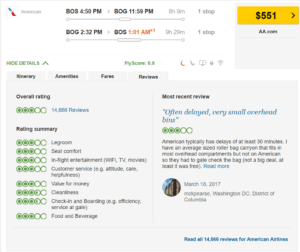 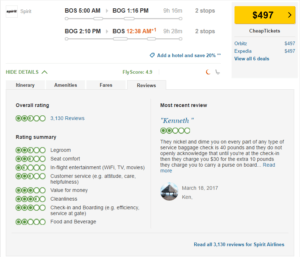 Not convinced that travelers are going to care about this new tool? Unfortunately, neither am I. FlyScore demonstrates that crowdsourcing information alone is insufficient. What matters is whether or not you are collecting useful information.

The first problem is that FlyScore itself is pretty opaque. What is FlyScore ranking, exactly? The reader can’t double-click to find out. If you happen to be interested, TripAdvisor says the score is calculated based on “qualitative traveler reviews, the quality of the aircraft, in-flight amenities, and duration of the itinerary”. This neglects things like the likelihood of delays, costs of changing your flight, and how airlines deal with bad weather.

Next, what the accompanying reviews tell us is largely what we already know. In sum, it looks like American Airlines is pretty mediocre. Big surprise. Slightly superior ratings on things like legroom and seat comfort might induce a buyer to choose American over Spirit (right), but only for reasons most already understand.

Unfortunately, if buyers don’t find the FlyScore system useful, posters aren’t likely to provide insightful reviews either. TripAdvisor’s fifteen thousand reviews may seem like a lot, but its hardly a drop in the bucket considering American flys 51.1 million passengers a year [Wiki]. By comparison, Amazon’s Fire Stick has over fifty thousand reviews [Amazon].

What FlyScore needs to do is tap into the anger of the crowd to highlight the ways in which airlines can be different from each other in ways that buyers might not have anticipated. Rather than asking reviewers simply to rank their experience on a few metrics, TripAdvisor could focus on generating specific incident reports for things like long runway relays, late weather cancellations, overbookings, and indiscriminate enforcement of baggage dimension requirements. It is easier to engage customers on specific, negative incidents because you offer them a conduit for their anger.

Next, TripAdvisor should channel this anger into data that is useful for buyers. This means metrics on which airlines are most likely to leave you stranded, stuck, running late or paying gross fees.  In less polite terms: the likelihood of getting screwed. Stronger engagement would allow TripAdvisor to collect information on specific routes, which have as much to do with the variation in service quality as the airline itself.

Last, the platform could eventually help travelers connect with each other in real-time when disaster strikes. Ever been in an airport during a major storm? Everyone is trying to get information to make important decisions on the fly, but only a few travelers are able to get real-time information from customer service reps. FlyScore could help fellow travelers share information and collaborate, putting their power back in their hands.

One way or another, in the future our frustration with airlines will not go unrecorded. Companies like TripAdvisor only have to unlock the power of the crowd to help flyers better avoid airlines that are likely to screw them.

The Travel Industry Should Be More “Crowded”

Student comments on TripAdvisor’s FlyScore: Not yet harnessing the power of crowds