The year is 1994. YG, a young boy at the age of 9, gets sick of playing hack-and-slash computer games against himself. He walks to the newly-opened computer lab in his school, where a couple of kids introduce him to the world of MUDs (Multi User Dungeons), text-based computer games (the internet was not fast enough for anything else). YG logs on to Legends of Excalibur, registers the name Gongor, and plays with 60-100 more people at a time. Together, YG and his new found friends go on numerous adventures, slay monsters and save Camelot time after time.

Fast forward a couple of years. The internet is now much faster, and game creators begin to understand that people no longer want to play alone. Blizzard launches Diablo and introduces the Battle.Net platform to try to gain recurring revenue and control when and how players play against each other. In parallel, Epic Games, a small game company, creates a very successful game called Unreal. Quickly understanding that games themselves are no longer the source for revenue, Blizzard and Epic choose two distinct paths: While Blizzard stays in the gaming world and creates World of Warcraft, a subscription-based MMORPG (Massive Multiplayer Online Role Playing Game), Epic chooses to use its modular design to disrupt the market and make the Unreal Game Engine.

In the text-based world, anyone could download one of several engines and create their own MUD. In the new age, if one wanted to make their own multi-user graphics game, they had to master the following skills:

The goal of the Unreal engine is to make creativity the only barrier for creating new games, by disintermediating the different skillsets, and capitalizing from the trade of the other skillsets. Unreal (currently at its fourth iteration) combines a large R&D investment to distribute a developer’s kit that requires a minimal amount of coding (to attract a large user-base) and operate as a platform between design artists and the developer community. 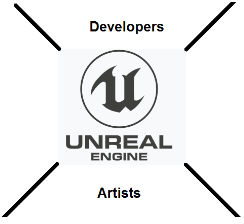 Let’s assume that YG, now 32 years old, has decided to give up on his HBS education and wanted to create a game. YG would most likely use Unreal to create his game, not only because the platform is provided for free, but also, as is visible from the above “image”, he lacks any graphic design skills whatsoever. He logs on to the platform and can buy other artists’ designs.

YG, our new dungeon master, can also gain from network effects and seek advice from the many other developers that use the platform, buy code snippets, or test the product. Ready made official training videos are abundant, and unofficial tutorials on the Unreal features are just a youtube-search away.

Epic purposefully sets itself apart from content distributors (such as Valve with Steam or other game platforms) and differentiates Unreal purely as a game engine, to avoid competition with strong brands that have higher market exposure. Marketing becomes the developer’s job, at their own discretion. 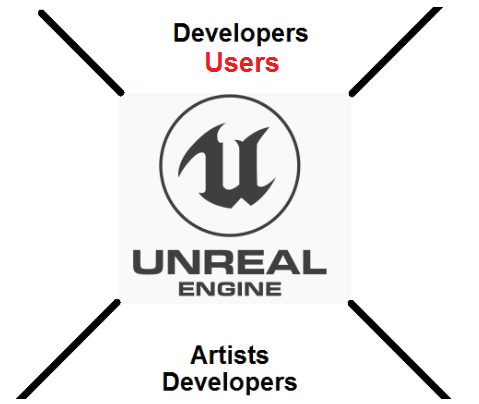 Epic tries to balance its value capturing efforts with the desire to increase the user-base. As noted before, the platform is offered free-of-charge to any developer.

Royalties from developers: When developers release a game developed in Unreal Engine 4, 5% of the revenue they make after the first $3000 per quarter will go to Epic. So if a developer makes a game, but it only grosses $2900 in a quarter, that developer won’t have to pay Epic a penny. If the game makes $13,000 a quarter, they’d owe five per cent of the $10K after the first $3K (so $500 in this instance). By using this policy, Epic only capitalizes on the long-tail of extremely successful games, and ensures a vibrant community of independent developers (“indie devs”).

Royalties from artists: When an item is sold on the marketplace, artists Receive 70% of the base price.

Unreal’s main competitor is Unity, the leader with an astounding 47% market share, with Unreal capturing 13% of the market. Unity’s pricing is much more complicated and less intuitive, with four product tiers developers can subscribe to: Personal, Plus, Pro and Enterprise. It seems as if Epic’s attempt to make pricing more transparent and easier to understand is an effort to capture market share from Unity.

Additionally, Epic announced a grant of $5m to developers in 2016. “The best part? There are absolutely no strings attached,” said Epic co-founder Tim Sweeney. “Your project remains yours; you own your IP and publishing rights and you can spend any grant funds however you like. Epic’s goal is simply to help UE4 developers succeed because when you succeed, we succeed.”

Each engine has its own specific advantages in certain scenarios, and the above graph also tells us that many developers use more than one platform to create the ultimate game. Epic, understanding their low market share, have constantly strived to attract more and more Unity users to multi-home, and have even issued a full guide to Unreal from an experienced Unity user’s perspective

Unreal is a free-to-download game development platform that seeks to offer a distinct solution to developers by disintermediating the various skills required to create games. The two main revenue streams come from royalties generated by successful artists and successful games. To increase their market share, Unreal offer grants to developers and try to attract users who currently use other platforms.

A hard pivot: Fitbit repositioning from wearables to healthcare platform

Student comments on The Unreal Platform for Game Developers