The New York Times has always been a benchmark in the media industry. Nowadays the Times is one of a few legacy newspapers which found his successful way in the digital age. Actually, it is not a paper anymore. It is a global multiplatform news organization.

Newspaper industry has been heavily disrupted by digital, first and foremost due to the collapse of the old print advertising model and new powerful social media platforms. Some papers had to close down, some struggle. Papers used to earn a lot of money from classifieds but this model has also been disrupted by players like Craiglist. The new digital advertising model is not so much profitable. Some publishers say that they exchanged print advertising dollars for digital pennies. Digital display advertising model works poorly, few people click banners online. Some digital native media outlets (BuzzFeed, HuffingtonPost, Vice) try to embrace the virality idea. They bet also on native advertising but it drives ethical concerns when it comes to quality journalism. Huge majority (85 percent) of online advertising money goes to platforms like Facebook or Google. In addition, the younger the media user, the more likely they are to get their news from social sources such as Facebook or Twitter. The platforms act like publishers, earn money from advertising but do not create content.

The New York Times found its own successful way.

In its newest strategy paper (Journalism That Stands Apart, January 2017), the Times announced that they were going to pursue subscription over advertising model:

We are, in the simplest terms, a subscription-first business. Our focus on subscribers sets us apart in crucial ways from many other media organizations. We are not trying to maximize clicks and sell low-margin advertising against them. We are not trying to win a pageviews arms race. We believe that the more sound business strategy for The Times is to provide journalism so strong that several million people around the world are willing to pay for it. Of course, this strategy is also deeply in tune with our longtime values. Our incentives point us toward journalistic excellence.

The Times has reinvented itself for years. When in 2011 they came out with the idea of a digital paywall, a few in the industry believed in their success. Now the Times has more than 1.5 million digital-only subscriptions, up from one million a year ago and from zero only six years ago. And they have just stated clearly that this is the main model they were going to pursue. 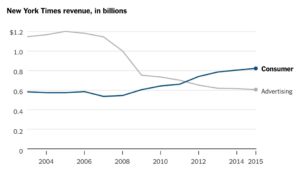 In its 2014 paper ‘Innovation Report’, which is one of the milestones in thinking about digital media, the Times stressed that the only way forward is the digital path; also identified the main competitors – young digital native media outlets like BuzzFeed or Huffington Post.

Although in 2014 most revenue still came from print, the Times made a bet on digital investments – following its digital audience. 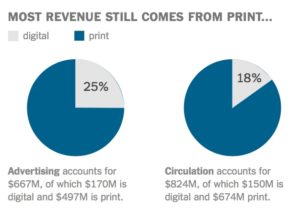 According to the company’s papers, last year’s digital revenue reached $500 million which is far more than the digital revenues reported by many other leading publications (including BuzzFeed, The Guardian and The Washington Post) — combined.

Innovation and inner startup culture have always been part of the Times core DNA. They successfully adopted paywall strategy. The paper experiments a lot, too. As a first media outlet the Times introduced daily 360 video. Recognized early the potential hidden in data, embracing data investigations and visualizations (The Upshot – digital section of the Times). Readers may find also strong push toward virtual reality (NYT VR app), documentaries and podcasts. Developers became part of the newsroom team (hacks&hackers alliance). The push toward visuals is strongly visible. It has started a few years ago with the widely praised multimedia project called ‘Snow Fall’ (2013 Pulitzer Prize). 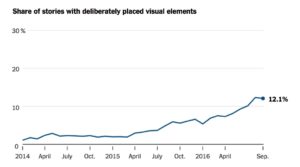 The New York Times recognizes also the power of radical connectivity trying to establish conversational tone with its readers.

Asking readers to invest their time on our platform creates a natural cycle of loyalty. Network effects are the growth engine of every successful startup, Facebook being the prime example.