For over 100 years the world has seen land lines phones as the most effective and standard method of communication between people. People and companies adopted this technology to communicate and interact with each other on a daily basis providing them a much faster and accurate form of communication than the mail or the telegraph. However, as the digital era began, hardware, software and the internet have taken over and seem to be driving the future of communications. Mobile phones have become constant companions for most people in the world and landline phones are rapidly losing relevance. Ten years ago, 9 out of 10 U.S. households used to have an operational landline phone – now it’s just every second household. 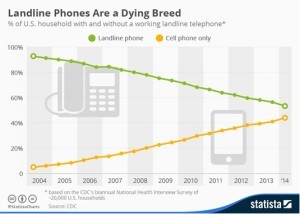 Mobile penetration (number of mobiles per person) has increased aggressively over the last few years, reaching more than a 100% in the U.S., Europe and some emerging markets, and more than 7.3 billion connections over the world. Individual consumers as well as businesses have turned to this new method of communication as a way to adapt to the globalized world, in which waiting until reaching home or the office to deliver a message is no longer an option. 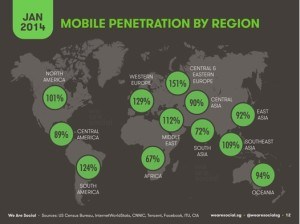 Phone providers like AT&T and Verizon have been converting their users to wireless over the last few years so they might not be concerned about the drop-off in landlines, but the landscape is undoubtedly changing. For instance, phone companies are starting to face competition from cable companies, like Time Warner and Comcast, who create value and lure in customers with their internet-based communication offerings. Even as their landline subscribers decline, the transitioning phone companies still have to invest billions of dollars a year to maintain the old networks while the newest competitors who only provide the latest technologies (e.g. VoIP) can focus on providing just what the consumer wants. Therefore, companies that fail to adapt quickly will perish in front of new and more focused competitors (e.g.  FairPoint Communications bankruptcy in 2009). In words of Sarah Briggs, director of public affairs of AT&T: “The motivation is increased consumer and business demand for wireless and voice over Internet. AT&T has seen a 70 percent decrease in traditional service over copper lines in the last 10 years.”

Evolution on telecommunication offering is important because consumer behavior is changing very quickly. While some years ago people used to call their friends and family, today they use online chats and videoconference apps like Facetime or Skype to reach to their love ones. This trend is also making phone companies’ unlimited minutes offers irrelevant because what really matters today is data.

Internet Protocol (IP) telephony, also known as Internet telephony or Voice over Internet Protocol (VoIP), is a disruptive technology that is rapidly gaining ground against traditional telephone network technologies. In Japan and South Korea up to 10% of subscribers switched to this type of telephone service as of January 2005, while up to 20% and 40% of U.S. and European households had done the same by the end of 2011.

In order to survive, telecommunication companies will have to constantly evolve to create value for customers through these kind of technologies. But they have to be careful, because the world changes quickly and new advances arrive all the time. Adaptation is the key that will distinguish winners and losers in this new era of digital communication.