How an industry declined 80% in less than a decade

With rapid advancements in smartphone camera technology, quality photography that was once reserved for digital cameras or even sophisticated cameras with interchangeable lenses are now becoming more accessible through mobile devices. While high end cameras still appeal to a segment of professional photographers and enthusiasts, for the average consumer, the quality of smartphone cameras have improved to such an extent that picture taking via the phone camera is more than enough for everyday use. The resulting impact on the camera and photo equipment industry has been disastrous, with worldwide camera shipments dropping almost 80% from 2010 to 2017 [1], driven primarily by digital cameras with built-in lenses [2]: 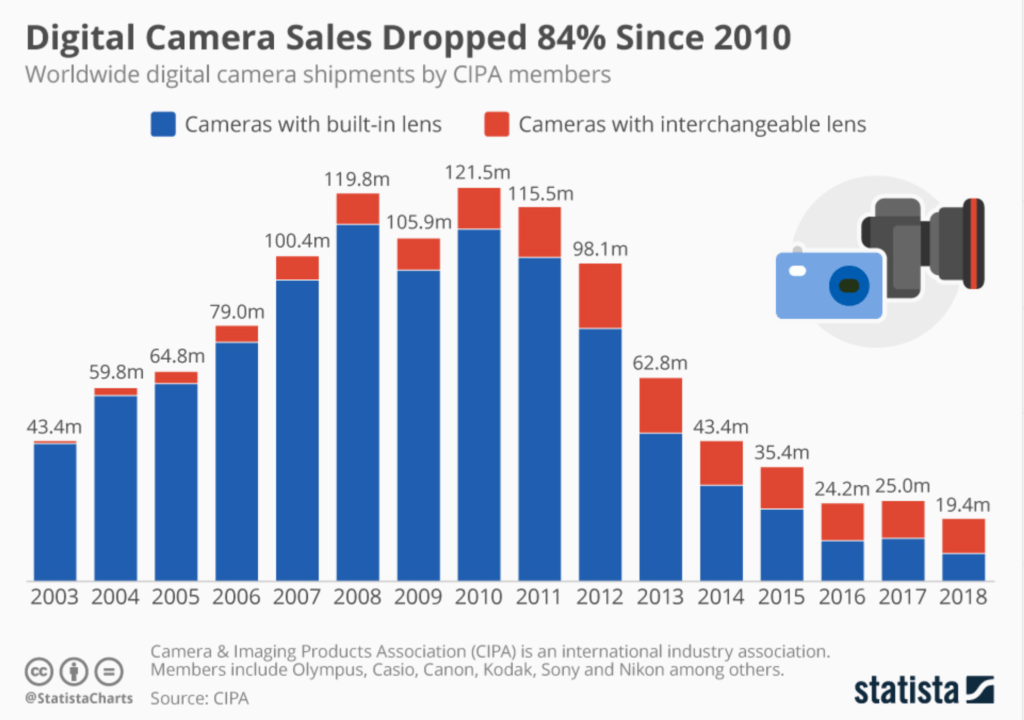 The Winners and Losers

The winners in this digital transformation of photography are smartphone makers, particularly premium brands like Apple, Huawei, Google, and Samsung that are increasingly differentiating their handsets through cutting edge camera capabilities. The losers are manufacturers of digital cameras such as Olympus, Casio, Canon, Fujifilm, Sony, and Nikon. The large disparity in financial performance between the winners (in shades of blue) and losers (in shades of purple) is captured by the stock performance of select publicly traded members in each group over the last 5 years:

The Camera, the Only Smartphone Feature that Matters

As the smartphone market becomes saturated and commoditized by the ubiquitous availability of essential features such as calling, messaging, and social media accessing, smartphone makers are looking to focus increasingly on premium models to make higher margins out of decreasing volumes. To them, one of the few features that still draw consumers into upgrades is improvements in the camera quality [3].

Even so, competition among mobile handset makers deploying the premiumization strategy is cutthroat with relatively new Chinese disruptor Huawei increasing its market share from 10.4% in 3Q2017 to almost 15% in 3Q2018, at the expense of incumbents such as Samsung and Apple [4]:

Over the last few years, the tight race has produced a slew of phones whose advanced camera technology even has professional photographers now embracing the smartphone as “camera alternatives”, and even “starting to give DSLRs a run for the money too” [5]. The investments that smartphone makers put into the camera is also indicative of its central importance to the device. For instance, the camera unit for Samsung’s Galaxy S9 Plus is one of the most expensive parts of the device, with a cost of around $45 out of a total bill of materials of around $376 [3].

Below are some features on the 2 best camera phones in 2019, as voted by Digital Camera World, a digital publication that has primarily reviewed standalone cameras in the past [5]: 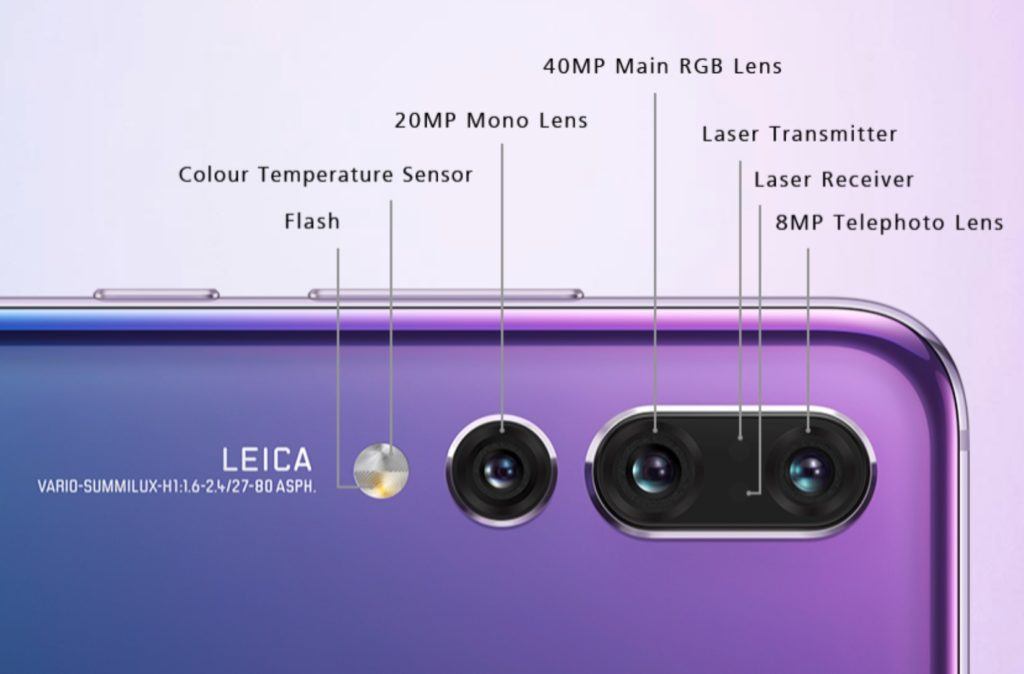 Huawei P20 Pro: With a three-lens camera and AI to help frame compositions, the P20 Pro features rear cameras that combine a 40 megapixel RGB sensor, a 20 megapixel black and white one, and a 8 megapixel shooter that allows 3x zooming without compromising photo quality. There is an additional 24 megapixel front camera. 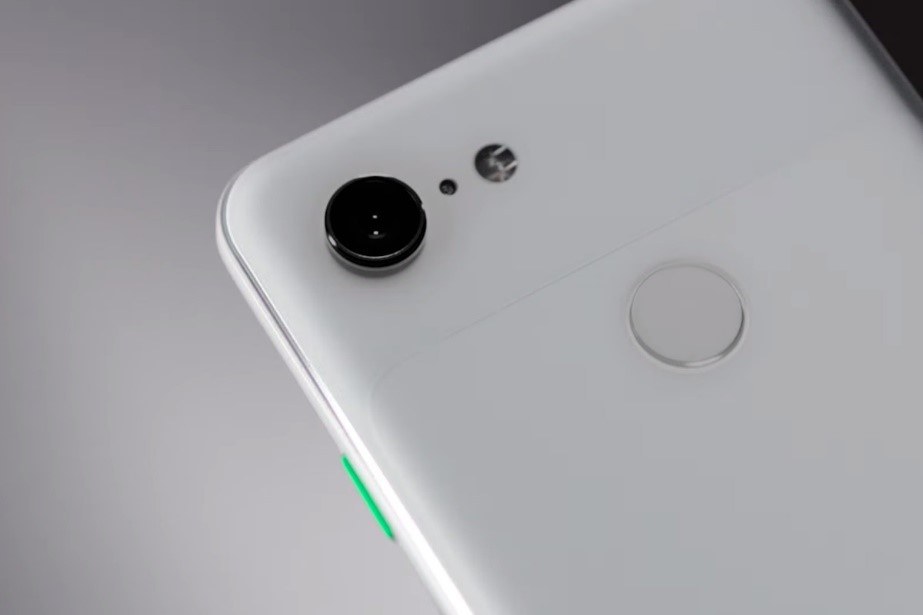 Google Pixel 3: Using just one 12.2 megapixel rear camera lens and a 8 megapixel front camera lens, the Pixel 3 features a new Night Mode, which offers amazing pictures in the low light. Google has even partnered with famous portrait photographer Annie Leibovitz on her travel portrait project and Conde Nast for its photographers to use the Pixel 3 to shoot the covers of 7 of its magazines including those of Ryan Gosling for GQ and Cardi B for W magazines [6].

The Winners: How They Create Value

As both the hardware for small camera lenses and sensors, and the processing power and software capabilities of mobile phones improved [9], photography technology that once could only exist in a clunky digital camera can now be accessed via a thin, compact mobile phone. The famous photographer Chase Jarvis once said “the best camera is the one that’s with you,” [2] and given the fact that our smartphones are always with us, they offer the most convenience for photo taking at each “Kodak moment.”

As about 60% of the world now own smartphones [8], their ubiquity facilitates usage and the lack of need to buy cameras as most people are able to now take photos anytime, anywhere they want without needing to buy any other piece of hardware. 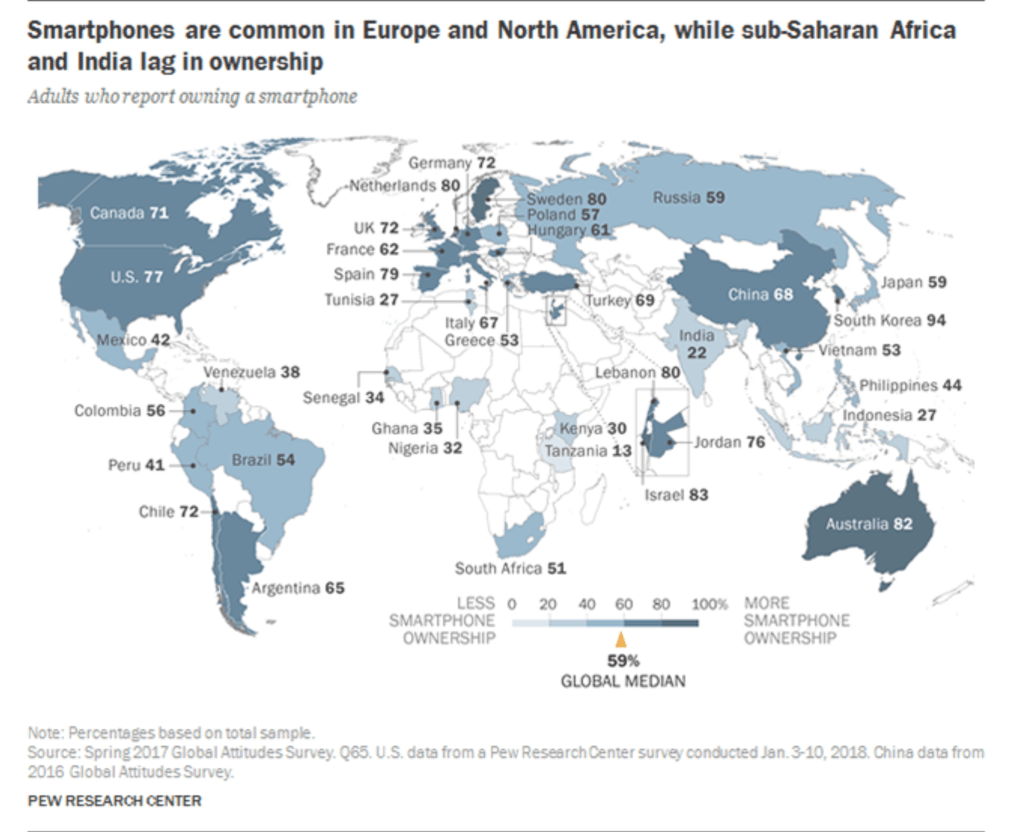 The time when digital camera unit sales first started to decline in 2010 – 2011 coincided with a period of fastest growth for Photo & Video mobile apps [7]. 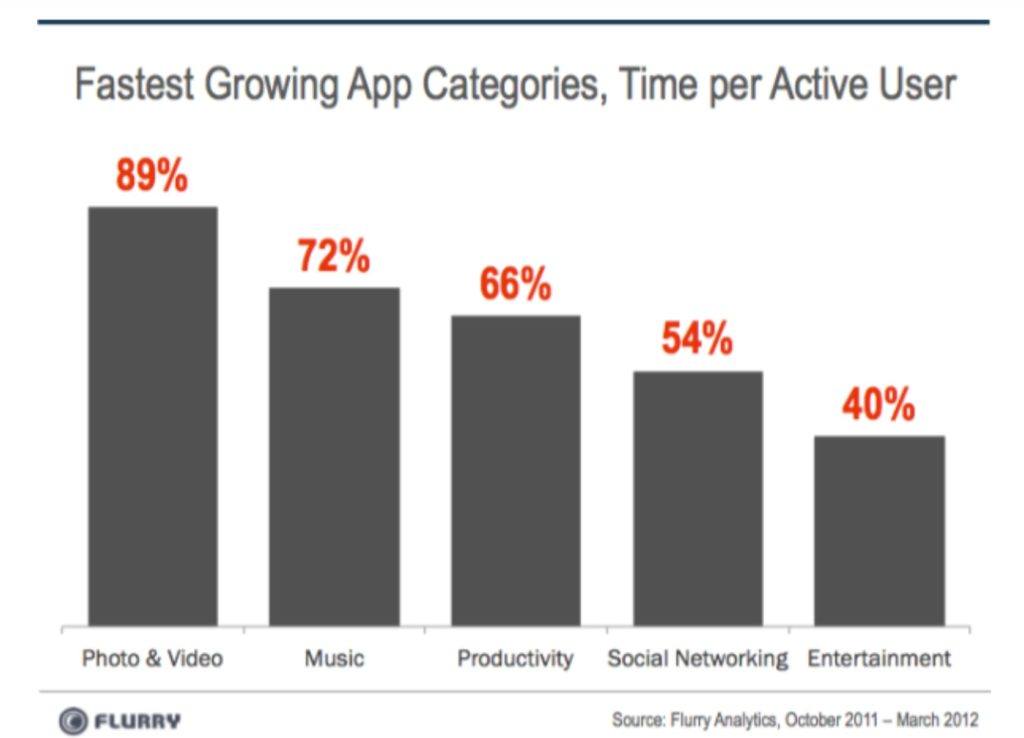 This time period saw the rise of mobile photo editing apps such as VSCO, a photography app founded in 2011 that allows users to capture photos in the app and edit them through filters, and of course mobile photo sharing apps such as Facebook, Instagram, and Snapchat. Smartphones enabled users to take, edit, and share photos all on one device in a timely manner. In more recent years, smartphone camera technology further allowed the creation and editing of both long- and short-form videos on a plethora of existing platforms and new ones such as Tik Tok. The virality and strong network effects created by social media facilitated the purchase of more smartphones, especially those with increasingly improved cameras for better content creation and sharing.

The Winners: How They Capture Value

With sky high prices ranging from $650 for the cheapest model of the Huawei P20 Pro to $1,499 for the most expensive version of the iPhone XS, smartphone makers betting on the premiumization strategy are in it to make money!

The hope for smartphone makers is that about every 2 years, existing customers will upgrade to newer and (most likely) more expensive versions of their existing phones, driven by perceived improvements in the cameras of the new models.

Winners such as Apple and Google, who own both the hardware of the mobile phones and the software operating the phones, will take a commission from initial paid app downloads and/or subsequent in-app purchases and subscriptions.

The Losers: How They Failed to Create and Capture Value

Makers of digital cameras failed to innovate on more convenient and compact form factors that would’ve helped to make their devices more ubiquitous. Perhaps more importantly, they failed to create and develop the kind of ecosystem and network effects that mobile apps have generated for smartphones. As a result, the value that camera makers have been able to capture, in the form of sales price, has also seen consistent annual declines alongside unit shipments [10].

Camera makers now only have a few niches of categories like action cameras, large-sensor photo-enthusiast models, and superzooms to survive on. However, even two of those niche areas are under attack by smartphones. Larger sensors on cameras have enabled easier deliberate control of the depth of focus in photographs, giving the photographer more creative control. This capability is now being replicated by depth estimation technology that has now become standard for the main camera on high-end phones, whether through dual cameras (on iPhone XS and Samsung Galaxy S9 Plus) or with dual-pixel technology (on Pixel 3). In terms of the superzoom niche, we just saw how Huawei’s P20 Pro now allows 3x zooming without compromising photo quality [9]. To me, it seems to be just a matter of time before smartphones dominate all three niches and decimate camera makers.

[3] Steve Ranger, “The camera is now the only smartphone feature that matters,” ZDNet, https://www.zdnet.com/article/huaweis-triple-camera-p20-pro-shows-the-camera-is-now-the-only-smartphone-feature-that-matters/, accessed February 2019.

[4] “Global smartphone shipments down 6.0% in Q3 2018 as the leading vendor and the largest market face challenges, according to IDC,” IDC, https://www.idc.com/getdoc.jsp?containerId=prUS44425818, accessed February 2019.

[7] Paul Sawers, “Photo and video is the fastest growing mobile app category, according to Flurry report,” The Next Web, https://thenextweb.com/insider/2012/05/08/photo-and-video-is-the-fastest-growing-mobile-app-category-according-to-flurry-report/, accessed February 2019.