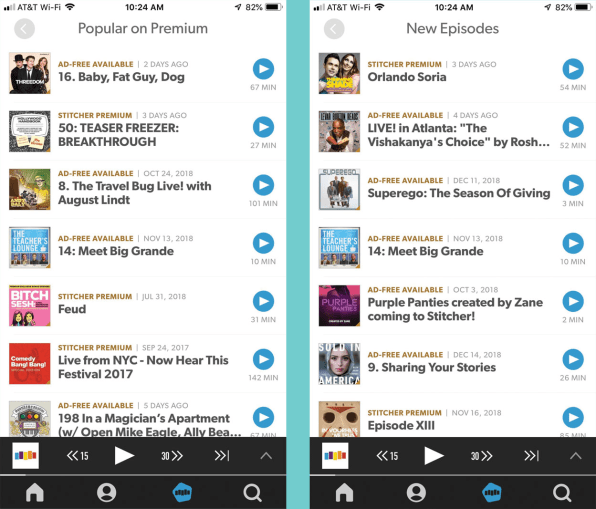 Stitcher, positioned as the “Netflix of podcasts”, is the second most popular podcast app globally with over 100,000 podcast episodes, and over $50 million in 2018 revenue. As a podcasting player app, it sits in the middle of a complex ecosystem connecting publishers, their hosting platforms, and advertising providers to the lucrative young, educated, and affluent American population that listen to podcasts.

Stitcher’s subscription business model stands in contrast to that of incumbent Apple. Apple provides the Podcasts app automatically pre-downloaded into every new iPhone and allows listeners to access all its partner publisher content for free. It is not known to collect any direct revenues (until it chooses to produce its own podcast content similar to AppleTV). Apple puts content into its app free of charge, using the app and its library as an additional service for iPhone users. It also doesn’t give ways for podcasters to charge for content, except “host-read ads” built directly into the episode, funnelling advertiser money straight to publishers.

While Apple Podcasts is a very small part of Apple’s overall business, Stitcher’s needs to build a sustainable stand-alone podcast business. As a result, Stitcher is handset agnostic and available on both iOS and Android devices. It employs a hybrid revenue model – all users can access a select number of podcasts for free, but also offers access to premium content through a subscription. As content is a hit-driven business, access to listener impression level data allow Stitcher to know what drives successful content, and more importantly which type of content to put behind a paywall. Regarding advertiser networks, CEO Erik Diehn acknowledges “that sort of read [Apple’s host read ads] will not necessarily scale to billions of dollars”. Stitcher also sources revenues through advertising dollars starting with partnering and then later selling itself to ad networks  – the largest of which is Midroll Media.

Midroll Media, through its TV and radio parent E.W. Scripps, acquired Stitcher for $4.5M in cash in 2016 with the intent of bridging the podcast advertising and platform networks as an end-to-end podcasting company. The acquisition allowed Stitcher to employ and master dynamic ad insertion, where ads are inserted dynamically for each download. This combines Midroll’s ad targeting capabilities and Scripps’ impression level data to create a learning effect by tight tech integration (which would have been more limited in a partnership) that improves both software platforms. This also makes a very compelling value proposition for brand and direct response clients that want to reach and educated and affluent audience as well as diversify ad spend beyond Google and Facebook. The acquisition also allows Midroll and Stitcher to create a more effective walled garden and a better negotiating position versus its publishers and host partners. Stitcher is controversial in not playing podcast files directly from host servers, but instead re-hosts a more compressed version in order to insert the ads. Controlling the files, the player, and the advertising allow Stitcher and Midroll direct control over the ecosystem that content creators, competitors, and hosts have fearfully called the “Facebook-ization of podcasting”.

As a testament to the power of the content platform over even the ad network, the acquisition inverted itself in 2018, where Stitcher became the parent brand and Midroll its advertising arm. As a result, Stitcher as the platform now wields more power both as a recognizable consumer brand, but also being able to withhold advertising capabilities from its competitors. Stitcher continues to drive additional exclusivity strategies – for one, it has partnerships with auto manufacturers and successfully integrated the app into 50 different car models. This is especially relevant when an average podcaster is listening to episodes over 22% of the time while in the car. Finally, Stitcher has entered the original content space with its own studios powered by Sennheiser as well as partnering with Marvel on the new Wolverine: The Long Night which it intends to put firmly inside its paywall as a Stitcher Premium exclusive.

Similar to big tech’s endeavors, Stitcher and the podcasting industry aims to disrupt the last remaining frontier of traditional media, radio. Where very little remains out of Google, Facebook, and Netflix’s clutches, Stitcher is attempting to take many pages off their playbook in integrating advertiser networks, making strategic mergers (and then takeover inversions!), and building and partnering for exclusivity. They may have managed to fly under the radar in the meantime, but it will probably not take long until Apple decides to stop deprioritizing podcasts and fight back.

How Groupon failed Ali Wong, but Netflix saved her

Student comments on Stitcher Podcasts, Midroll Media, and the Art of Battling Giants