Any businessperson today is familiar with the winners of the first wave of digital transformation in enterprise productivity: Microsoft’s Office suite of products. Word, Excel, and PowerPoint are ubiquitous in the workplace, but they are the last of their kind.

We have reached the end of a long line of on-premise productivity tools centered around the individual desktop user, tracing back to the likes of WordPerfect, Lotus 1-2-3, and even the stand-alone word processing machines of the 1960s and 70s and the IBM Selectric typewriter. As has been said ad nauseum, the workplace is moving to the cloud and placing paramount importance on digital collaboration, and applications which cannot make that transition are being replaced. Fare thee well, Office 2010.

At first glance, the winners in this new cloud-collaboration era would seem to be obvious — Google’s Docs suite and Microsoft’s Office 365 suite. These applications have moved off the desktop and into the cloud. Multiple users can edit documents simultaneously. If paid, it’s via subscriptions instead of licenses. They have mobile apps! But as important as Docs and Offfice 365 are in changing the mentality of workplace users, they represent the awkward transition from one era to the next, not the new normal.

Word, PowerPoint, Google Sheets, and Google Slides share the same fundamental, analog constraint as did the typewriter: the printed page. No matter the number of next-gen features layered on to these products, they are, at their core, typesetting tools. Their purpose is to convert information into a format which can be transmitted through the analog protocol that is the 8.5 x 11 inch piece of paper. The printed page as the primary workplace communication protocol is still at the core of these products, and it is fundamentally outdated.

And thus, we are experiencing a new wave of digital transformation in the workplace, one where we finally abandon a paper-based communication protocol in favor of a truly digital one. Indeed, Steven Sinofsky calls it not a transition, but outright disruption. It seems ridiculous to contend that ‘paperless’ is only now, in 2015, becoming reality, but even if we’ve stopped hitting the “print” button, we’re still using tools built entirely around the requirement that we can. 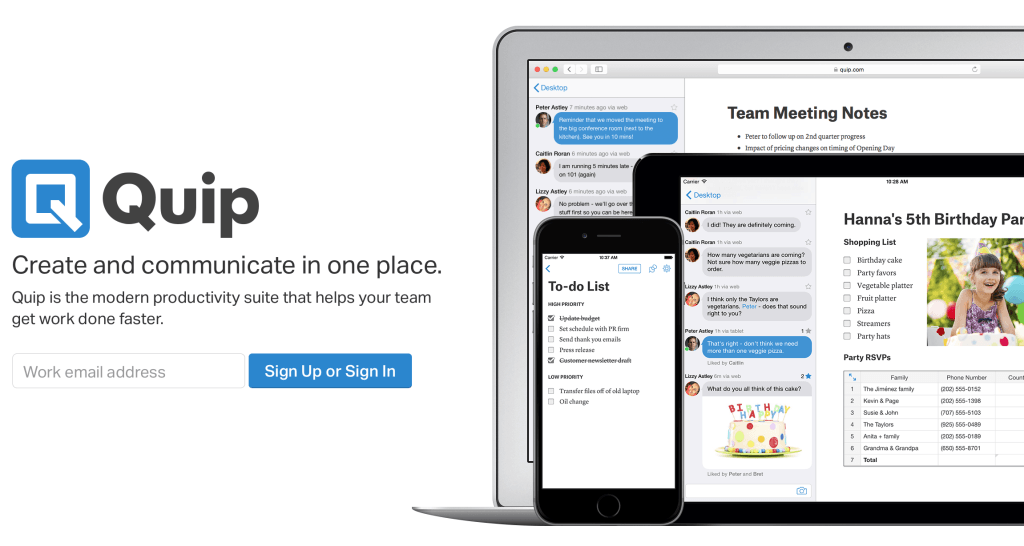 Quip has created a productivity suite that finally moves beyond the printed page. Quip retains many of the features of a Google Docs, including word processing and spreadsheets, but finally abandons the legacy constraints of paper, fully embracing the mobile device as the center of its design paradigm. The application is designed from the ground-up for the world we live in today, in which we communicate constantly and remain connected at all times, where mobile devices play a key role in content creation and enable the same untethered content consumption once monopolized by paper. The printed page no longer needs to be the lowest-common-denominator for content consumption; Quip recognizes that mobile devices are poised to take over that position and has built its platform accordingly.

For Quip, the tradeoff is between something familiar and something that makes inherently more sense. Users may opt for the familiar paper-centric tools for longer than would benefit them, but Quip has the full potential of the digital ecosystem at its disposal to change behaviors, unencumbered by legacy analog constraints. Just as Apple used but eventually abandoned skeuomorphism, ubiquitous ties to paper in the workplace will be inevitably abandoned and Quip is leading this charge.

As Sinofsky observes, “The existence and paramount importance of ‘document creation tools’ as the nature of work appear, in hindsight, to have served as a slight detour of our collective focus. Tools can now work more like we like to work, rather than forcing us to structure our work to suit the tools.” We no longer live in an episodic world of data collection —> analysis—> presentation —> decision, and repeat. With real-time access to the continuously evolving data required for decision making, the ‘print’ button might as well be renamed ‘pause’, which few organizations can afford to do. Quip has this tailwind at its back.

Not so Frozen in Time – National Geographic

How Betterment Wins by Reducing the Cost Structure of Investment Management