The original concept for Plex was derived from XMBC, an open source media player to allow content to be played via a hacked Microsoft Xbox. Developing from this code base, co-founders Elan Feingold, Cayce Ullman and Scott Olechowski launched Plex in 2009 as a way for users to manage and consume their own media collections [1]. Since then, Plex has expanded their offerings considerably, allowing users to connect their own personal media servers and stream their content across a variety of devices, from mobile phones to smart TV’s.

Plex has thrived in this niche market, developing a loyal base of over 20 million users. While the base product is free-to-use, there is also a paid subscription, Plex Pass, which opens up a variety of features from allowing costumers to download content to mobile devices and view offline to the ability to watch and record broadcast TV from a connected DVR. As the company has grown, they have also expanded the services offered to their customers by enabling access to other sources of content, such as news, podcasts, streaming music (with a separate TIDAL subscription) and ad-supported movies and TV shows.

Plex as a Platform

As the services provided by Plex have expanded, the value proposition provided by Plex and the stakeholders involved have become much more complex. For the purposes of this discussion, I will focus on the recent announcement in late 2019 that they would be offering an advertising based video on demand (AVOD) service to all users of their platform. While Plex is off to a good start, announcing deals with large media partners such as Warner Bros., MGM and Lionsgate [2], this is certainly a challenging opportunity to tackle. Previously, the main area of value creation was for customers to easily access their own content, with some additional features to improve this experience (categorizing TV shows, importing movie posters, displaying casting information, etc). However, Plex is now faced with the challenge of continuing to improve the quality of their services for existing customers and non-users, while also encouraging distributors to provide content for their platform. 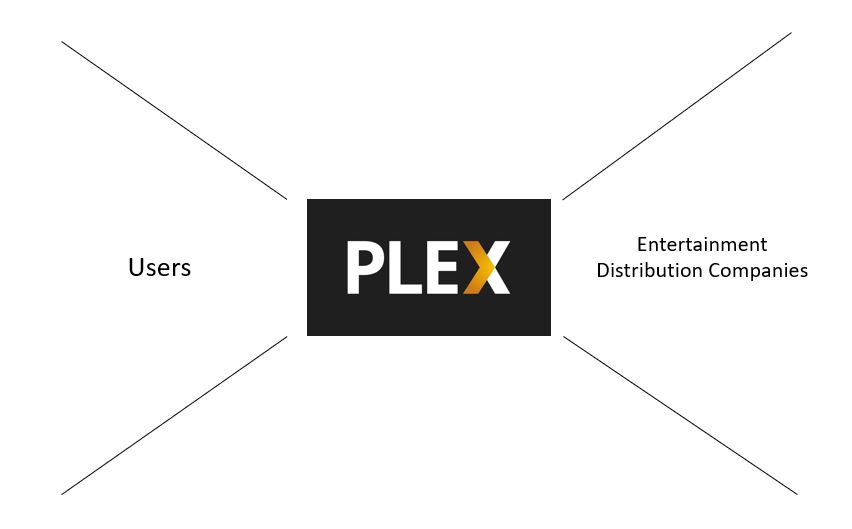 One of the biggest challenges that Plex will face in this transition is competition from much larger and better funded streaming media companies that users have access to. Consumers today have a plethora of options when it comes to streaming movies and video, and the industry is dominated by big names like Netflix, Hulu and Amazon. In this arena, there is a significant focus on getting the best quality movies and TV shows, and without a large user base (compared to Netflix’s 167 million globally [3]), it may be difficult to get other media companies to sign on. Another challenge for Plex in this expansion is widespread multi-homing, where it is not uncommon for users to be subscribed to many media streaming services, which may run counter to Plex’s goal of being a one-stop shop for their customers’ media needs. Finally, the core competencies required for streaming content from local media servers seem to be quite different from those needed to run an advertising-based media service, and it is unclear if this service will resonate with current users (who mainly use Plex to consume their own media, and may be content with going elsewhere for other TV shows and movies).

A key opportunity for Plex as it expands into streaming movies and TV is if it can effectively leverage user behavior data in order to more effectively target advertising for AVOD and its other services. Since Plex is centered around offline media consumption, this could provide Plex with a unique view into customer habits not readily accessible by other companies. The demographic of people who use Plex may also be less likely to use other streaming services, making this a difficult to reach segment. If Plex is able to leverage this relationship with customers and encourage adoption of Plex for other media consumption, these factors could provide with data that could be valuable to advertisers and media distributors, potentially bringing more and better quality content onto the platform for their users.