Patreon (pronounced “patron”) is a crowdfunding platform company that connects content creators with crowds of subscribers.

It is a modern spin on the ancient concept of “patronage.” Patrons would pay artists to support their creative efforts. This model is perhaps most associated with the Renaissance of 14th-17th century Europe, in which wealthy aristocrats paid artists – such as Leonardo Da Vinci, William Shakespeare, and Mozart – both to enjoy the works of art and the prestige associated with being a patron of the arts. Both these allures have persisted to the modern day.

Patreon has adapted this for the internet and created a platform to allow the masses to become patrons of art, facilitating creation of diverse, original works that may not otherwise have been created [1].

Creators on Patreon come in all forms, including podcasters, YouTubers, musicians, writers, visual artists, and more. 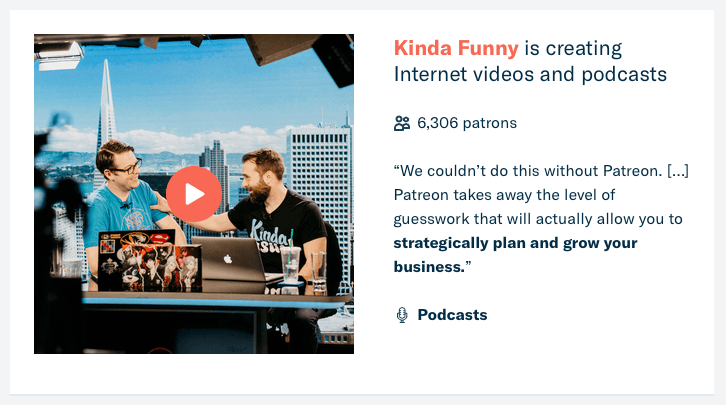 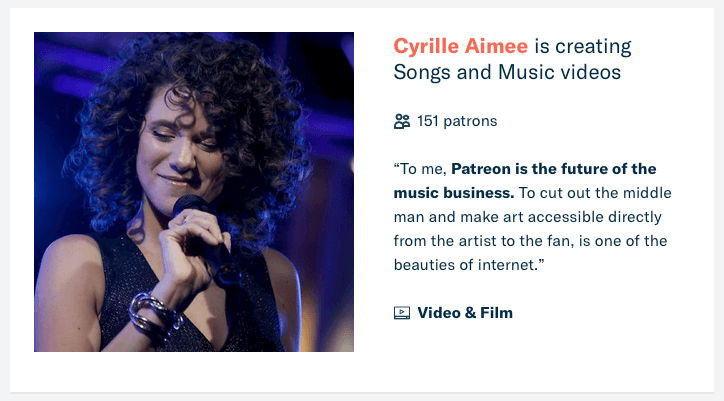 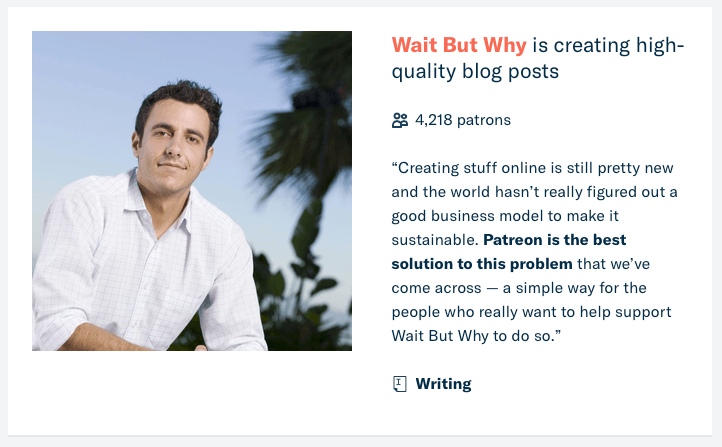 Patreon helps creators connect with a crowd of supporters and build a fan base. The platform employs a tiered monthly subscription where patrons can support a creator at a variety of monetary levels, each pegged to a proportionate level of benefits. For example, a subscription of $1 per month may grant the subscriber access to general content. $5 may grant early access. $10 may unlock additional content. $15 may include merchandise. Creators can set any level and type of benefit structure that fits their content. They can also make some content free to the public to attract new subscribers.

Through the mechanisms above, Patreon can help creators generate a continuing income stream while maintaining full creative control. More importantly, Patreon creates a channel for direct communication between the creators and their patrons. The platform allows subscribers to comment on the elements of creation they like or dislike, provide ideas for new content, or even collaborate on future content. This can create a virtuous cycle. As patrons feel more invested and connected to the artists, they feel more motivated to increase the level of their subscription.

Subscribers can discuss with each other directly on Patreon or through chat communities set up by the creators on Patreon.

Similarly, creators can also connect and support each other’s efforts, sharing resources, tips, and tools. In this way, Patreon leverages same-side network effects on both sides of their platform. Indeed, a vast number of YouTube videos and online posts have emerged as creators share tips and strategies for increasing growth [2].

Patreon has organized some of the supporting activities in blog form on its website [3], and in the form of support tools [4]. As the size of the creator community grows, Patreon can attract more benefits for the creators from 3rd parties, building a richer and more diverse “portfolio of tools” [5]. These include both the tools to support content creation (e.g. StreamLabs) as well as tools to support the creator’s businesses (e.g. Wealthfront, Weebly). Again, same side network effects increase the value of the platform [6]. 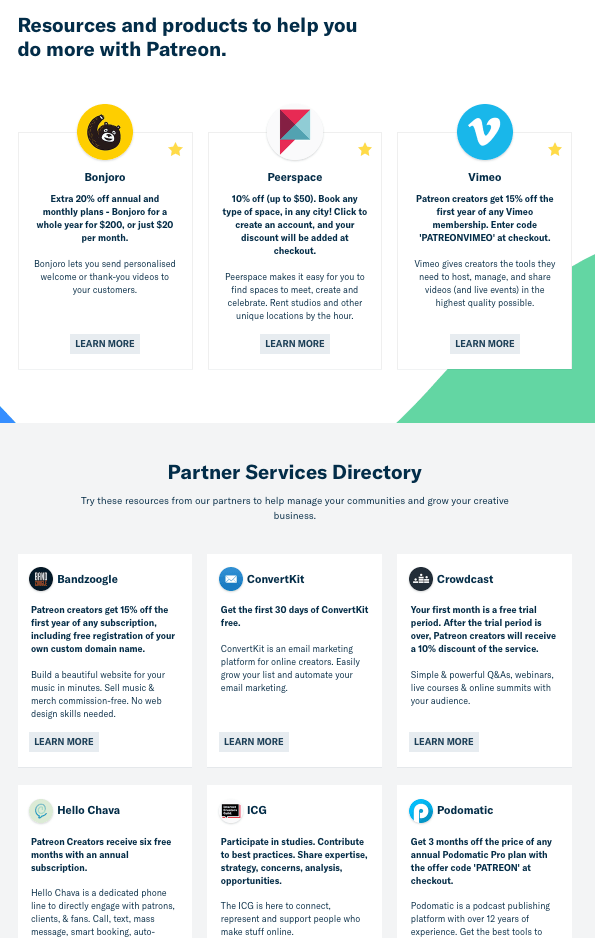 SHOW ME THE MONEY

This business model lets creators get paid directly by those who enjoy their creations. This is different from traditional models using corporate sponsors or advertisers that may be predatory and reward creators poorly [7].

Take the example of Jack Conte, a musician who founded Patreon. Over 3 months, he spent $10,000 creating a music video (titled “Pedals,” see below) that generated 2 million views but only $936 in advertising revenue on YouTube [8]. Conte argues that this model devalues creation, and incentivizes pursuit of clicks and views rather than focus on quality content [9]. Patreon’s model provides predictable and continuous income to artists allowing them to focus on their craft.

Patreon’s business model seems to have worked. Even with a small pledge of $5 per month per subscriber, the creator may earn a lot many times more than they would have from ad revenue for the same output [10]. Given the average payment on Patreon is $12, the advantages over ad revenue can be large [11].

The results are impressive. Over $100MM has been paid to creators since the Patreon’s launch in 2013, and the earnings, number of creators, and number of patrons all continue to grow. Meanwhile, the site’s Alexa rank has risen to 403 globally and 195 in the US [12]. 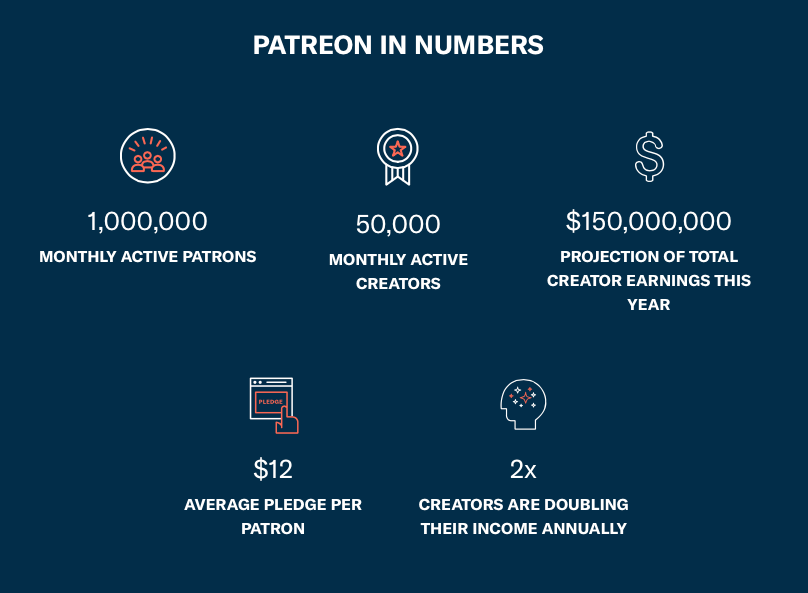 Not all are as bullish. One critique of Patreon notes that while some creators may make significant earnings, many others make very little [13].

Others say this critique misses the point. Art creation is inherently difficult and it is up to creators to attract fans who are willing to pledge. What matters is that most dollars pledged go to the creators as opposed to third parties. It is by this novel metric that Patreon performs beautifully [14].

As discussed previously, Patreon originally took a 5% fee from each pledge, and then charged a transaction fee that varied with the creator’s chosen pay schedule for third-party payment processing. Over time, creators complained. The fees were too high and they weren’t seeing enough of a share of the pledges.

In response to these complaints, and declaring a “creator first” mindset, Patreon created a new schedule that would maintain the 5% fee to Patreon and pass on 95% to the creator. The patrons, however, would now be charged an additional fee of $ 0.35 plus 2.9% of the pledge [17]. 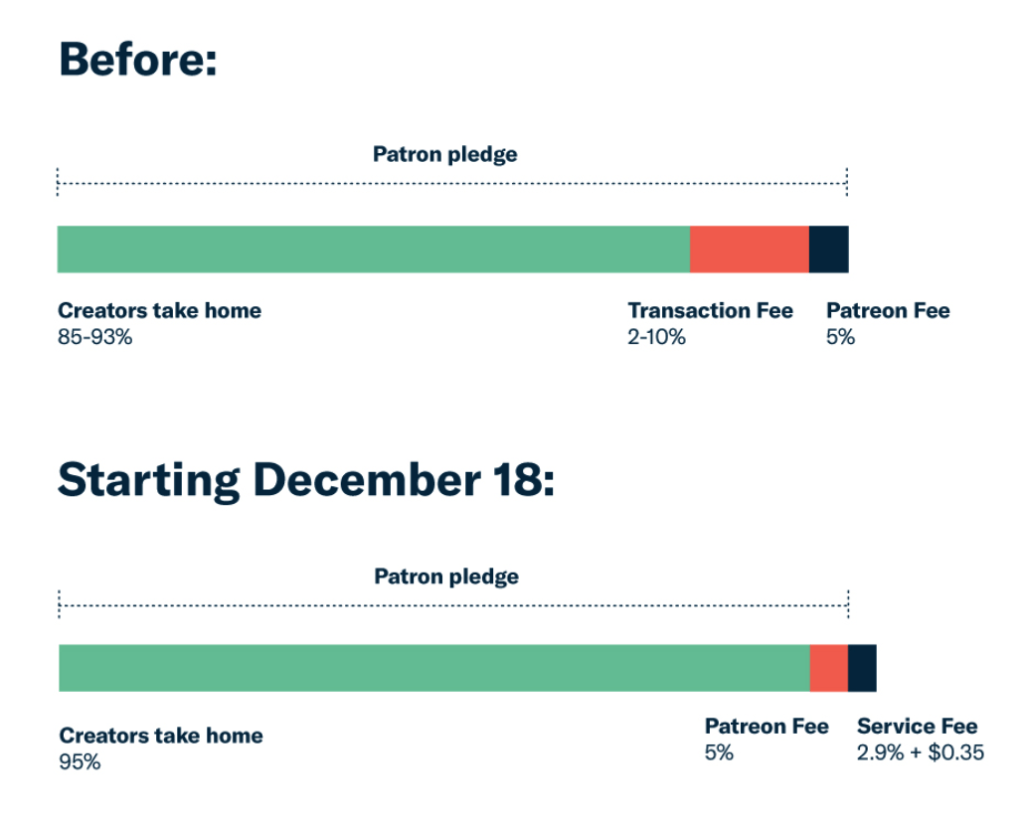 The intense backlash from a simple fee change reveals what makes crowds so powerful. Crowds may be at their best when they have low activation energy – or low barriers to joining – for each member of the crowd. That core phenomenon facilitates the aggregation of large bodies of individuals that together can offer great value. For creators on Patreon, that value came in the form of financial reimbursement, feedback on content creation (their core function), and personal satisfaction from engagement with the end-consumers of their content. By introducing this fee, Patreon inserted themselves into the all-important relationship between creator and patron, between crowd-leverager and crowd.

Patreon quickly recognized their misstep. Within a week, they withdrew the fee change. They apologized and explained why, and committed to working with creators to address the issues in the existing fee model [29].

Patreon’s success in value creation has been impressive. As noted in Forbes, they have worked the magic of designing a system where creativity is paid for in an era when content of these forms is largely free [30].

Moving forward, it will be interesting to see whether Patreon’s model is sustainable, and where the ceiling for value creation lies – if it exists at all. Danny Rimer of Index Ventures and former Etsy board member thinks, “Patreon has a very good chance of being fundamental to the fabric and structure of the internet” [7].