On January 31, 2018, Fujitsu, a major IT equipment and service company in Japan, announced that it will sell its mobile phone business to investment fund Polaris Capital Group, with a valuation around 50 billion yen ($456 million)[1]. Fujitsu was a top mobile phone manufacturer in Japan, with the domestic market share of 17.9% in 2011, but the share has declined to 8% by 2016. Meanwhile Apple has become a dominant player in Japan, with the market share of 43.5% (See the exhibit below). Why were Fujitsu, and other local mobile phone manufacturers, not able to compete with Apple? What made them left behind the technological shift in the industry? 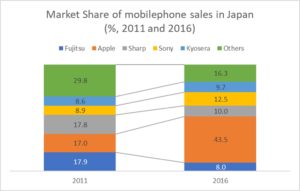 The Curse of i-mode 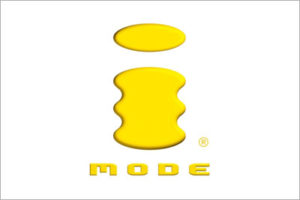 The first reason comes from its success in developing unique ecosystem of mobile phone. In 1999, NTT Docomo, the largest mobile phone operator in Japan, rolled out i-mode, the world’s first service allowing mobile phones to connect to the Internet, along with Fujitsu and other mobile phone manufacturers[2]. i-mode allowed users to access various services such as email, news and music from their mobile phones, and spread widely in the domestic market. By 2009, the number of users reached at 48 million, equal to 38% of the country’s population[3]. With a huge customer base of NTT Docomo, Fujitsu developed 95 different types of mobile phones only for NTT Docomo between 2001 and 2012[4]. These phones were highly customized for i-mode, and used Symbian OS as platform[5]. Even when iPhone and Android based smartphones have emerged in the market, Fujitsu could not reduce its dependence on NTT Docomo, and kept developing phones for i-mode ecosystem. It was also difficult for Fujitsu to cut its tie with NTT Docomo, because NTT, the largest telecom company and the parent company of NTT Docomo, is one of the largest clients for Fujitsu’s telecom equipment business[6]. In 2013, NTT Docomo shifted its focus to smartphone, and chose Sony Ericsson and Samsung as two top brands, and Fujitsu lost its presence in the market rapidly. 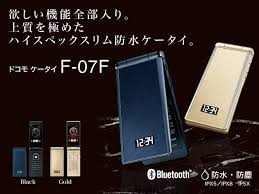 Another reason was unique demand from Japanese consumers on mobile phones. In 2016, the smartphone penetration in Japan was 39%, much lower than 88% of neighboring country South Korea and 72% of United States[7]. Many local consumers continued to prefer owning feature phones, which typically open like a clamshell and come with physical buttons, also known as “Galapagos phones”, named from Galapagos islands which have developed unique species of animals in an isolated environment[8]. Responding to such demands, Fujitsu continued incremental improvement of Galapagos phones. For example F-07F, a high end Galapagos phone launched in 2014, included the features like 12 different keypad illumination choices, 3 levels of privacy view mode, and waterproof /dustproof in compliance with IPX5/IPX8 standards[9]. While Fujitsu kept its focus on Galapagos phones, Apple, Korean manufacturers like Samsung, and Chinese manufacturers like Huawei have continued the development of smartphones and built competitive positions against Japanese manufacturers such as Fujitsu.

Fujitsu is another example of how incumbents struggled responding to architectural innovation (shift to smartphones/open platforms), due to its embedded practices (i-mode, dependence on NTT Docomo). Fujitsu only focused on incremental innovation, and lost its competitiveness after dynamic changes in mobile phone market.

TurboTax by Intuit: Taxes don’t have be Taxing