In 2014 Nest Labs had it all. The darling of Silicon Valley, the Smart Home technology company was forecasted to have over 1 million users, selling $200-300 million in revenue and was acquired by Google for $3.2 billion.[1] Founded in 2010 by two former Apple engineers, Nest was at the forefront of the “internet of things” (IoT). Yet, four years after being acquired, Nest has failed to meet revenue expectations, with rumors that its 2015 revenue was only $340 million, far below both Google and Wall Street targets.[2] This post will explore why Nest has stumbled and how its story represents the challenges facing the entire Smart Home market.

A Smart Home device can be defined as “any stand-alone object found in the home that is connected to the internet, can be either monitored or controlled from a remote location, and has a noncomputing primary function.” The market encompasses any smart appliance, smart home security and smart home energy product. A 2015 Business Insider Intelligence report estimates the total addressable market to be 13 billion devices by 2020, yet the same report forecasts that only 193 million Smart Home devices will ship in 2020, which is just an 18% CAGR from the 83 million shipped in 2015.[3]

On the surface, the value Nest is creating for consumers seems simple: an elegantly-designed thermostat controlled by your smartphone that adopts to your unique behavior to optimize heating and cooling, ultimately saving energy for your home. To a certain set of early adopters this is absolutely true. These consumers tend to be tech-savvy, high-income and see the value in having a smart device even if their non-smart thermostat is working perfectly. [3]

Yet, a market of early adopters does not make a technology “winner.” What Nest has failed to understand is the importance of “crossing the chasm” in the technology adoption life cycle curve. Moore’s Chasm says that there is a gap between Innovators/Early Adopters and the Early Majority/Mass Market in how they view technological products. While the Early Adopter is looking for change between old and new ways and will easily accept bugs that accompany innovation, the Early Majority consumer is a pragmatist looking to minimize discontinuity – they want evolution not revolution and need a clear and compelling reason to buy. Technologies that fail to adapt their product and marketing efforts to prove its need to this distinct consumer segment will fail to become widely adopted technologies – think of Segways or QR Codes.[4]

As the below graph indicates, Smart Home devices, including Nest, are currently in the chasm of the adoption curve [3]: 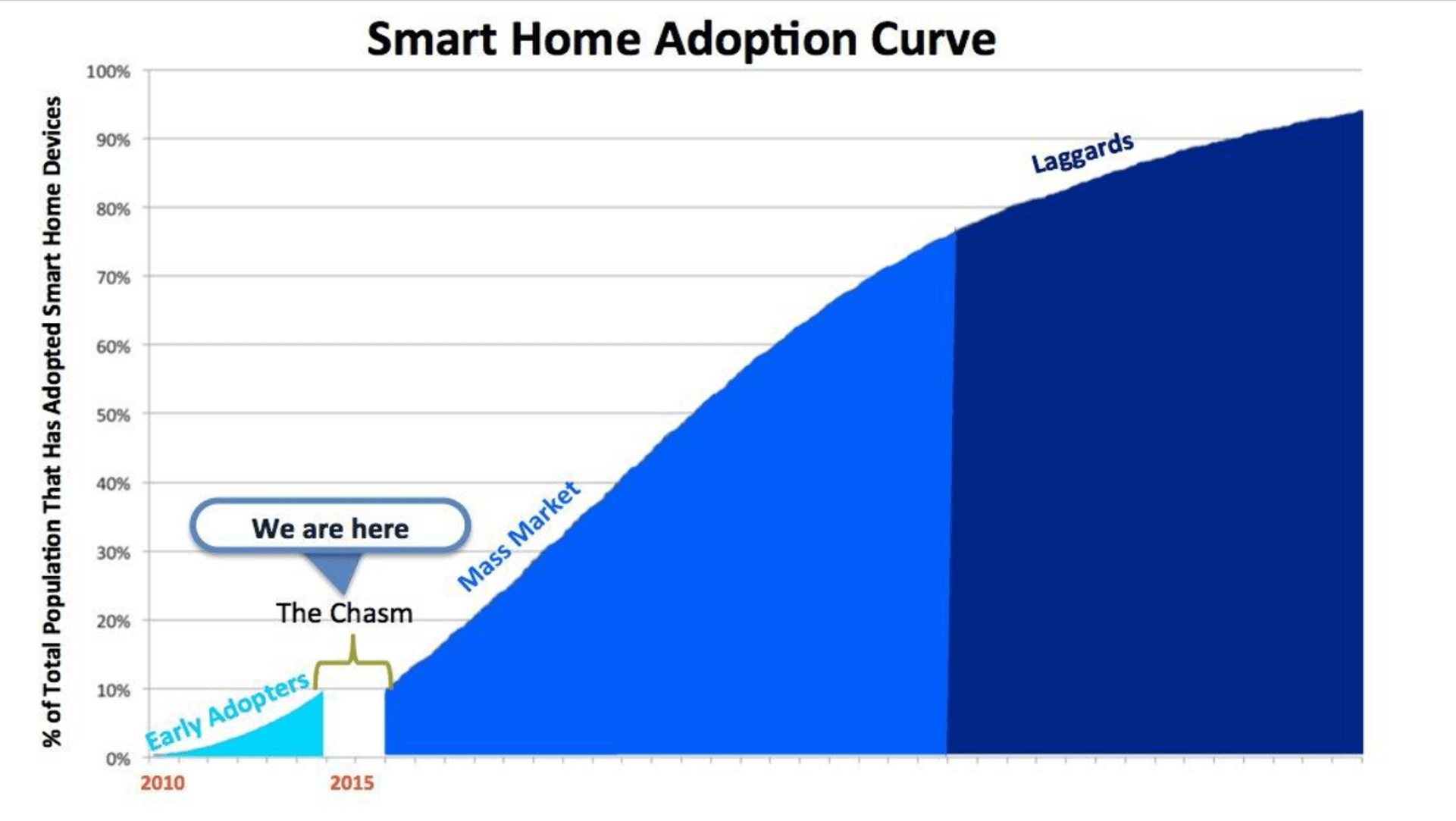 Nest is not well positioned to cross the chasm for several reasons: 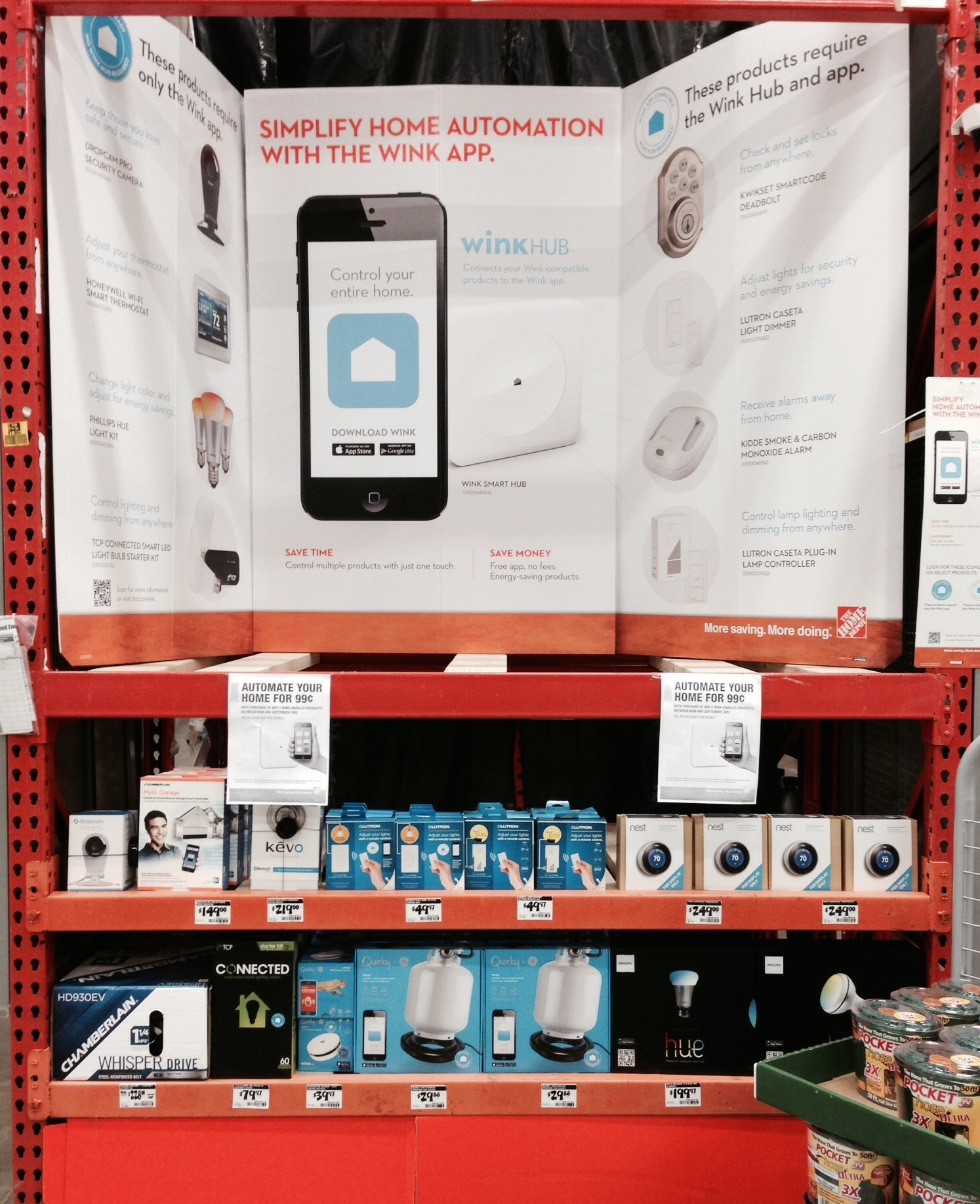 These barriers are not just for Nest alone, an Accenture study in 2016 highlights that IoT technology as a whole is seeing many barriers to demonstrating value perception:[5]

Although chasm effects are likely not the only reason Nest’s sales are stagnant (another blog post could be written about acquisition challenges within Google), it is important to recognize the difficulty of gaining mass market adoption. A company must adopt new strategies just at the time they have become comfortable with old ones. While Nest is losing the technology adoption battle right now, it is at a crossroads. With its founder/CEO stepping down in 2016, Nest has the opportunity to rethink its adoption strategy and to try to win in the Smart Homes battle. For example, the company is already examining a change in its business model from B2C to B2B through targeting professional installers and contractors.

Student comments on Nest: Falling Into The Chasm